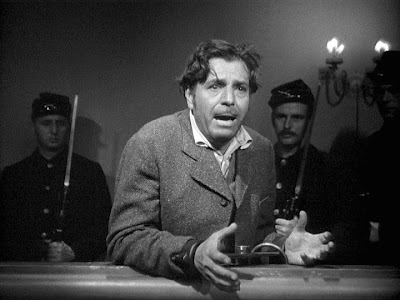 After President Abraham Lincoln was assassinated by John Wilkes Booth at Ford's Theatre in 1865, Booth was pursued by Union soldiers and shot twelve days later. Eight people were later charged with conspiring with or assisting Booth. Found guilty by a military tribunal, four of these were hanged, one received a six-year prison sentence, and three more were sentenced to life in prison. Among the last group was a Maryland physician, Dr. Samuel Mudd, who had treated the broken leg Booth received when he jumped from Lincoln's box to the stage after shooting the president. The Prisoner of Shark Island is the story of Dr. Mudd as told by director John Ford based on an original screenplay by his longtime collaborator, Nunnally Johnson.

In the film, Mudd (Warner Baxter) is portrayed as an innocent victim of circumstance unjustly accused and railroaded into a hasty conviction. When we first meet him, he is a contented country doctor living on a Maryland farm with his wife (Gloria Stuart), young daughter, and feisty father-in-law. When he treats Booth, he has no idea who Booth is or even that Lincoln is dead. After soldiers pursuing Booth find that Mudd has treated the fugitive, they arrest him as a conspirator and take him back to Washington for trial. From the first, he is mistreated and his family kept uninformed about what is happening to him. The tribunal is depicted as a kangaroo court which ignores the basic tenets of criminal justice, such as the rules of evidence, the presumption of innocence, and even the right to defend oneself. 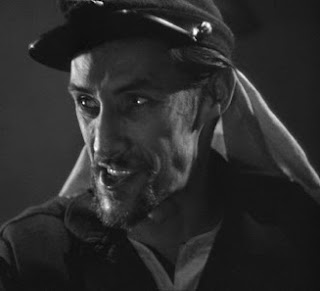 Mudd is convicted not on the evidence, but because of his Southern background and his pro-Confederacy political beliefs during the Civil War. Transferred to a federal prison on Dry Tortugas, an island in the Florida Keys, Mudd is systematically bullied and abused. Chief among his tormentors is a sadistic officer named Rankin, played by a feral-looking John Carradine in the first of twelve films he would make with John Ford. Before finally being released and reunited with his family several years later, Mudd endures among other ordeals an abortive escape attempt, solitary confinement in an underground pit, and a yellow fever epidemic.

John Ford is a director who inspires both admiration and loathing in film critics. "A storyteller and poet of images," says Andrew Sarris of Ford. "The glorification of Ford . . . as an artist should not conceal the fact that his message is trite, callous, and evasive," counters David Thomson. One could easily find enough evidence in The Prisoner of Shark Island to support either of these views.

Like most film directors who got their start directing silents (he directed dozens of silent films between 1917 and 1929), Ford had a highly refined sense of the visual, and The Prisoner of Shark Island contains many of the imaginative visual touches that make a Ford film special. Working with the cinematographer Bert Glennon, who shot several of Ford's films including Stagecoach, Ford gets in a number of darkly lit passages that are highly atmospheric. The dim gaslight of interiors and the cavern-like corridors and medieval gloom of the prison create scenes which in style are almost expressionistic. The trial sequence, with the hooded prisoners roughly dragged into the courtroom and the disheveled Dr. Mudd making an impassioned plea for his innocence, is particularly memorable. So is the long, expertly staged, and nearly silent nighttime action sequence when Mudd attempts to escape, with Baxter doing many of his own stunts.

"He could dispose of a plot quickly and efficiently when he had to, but he could always spare a shot or two for a mood that belonged to him and not to the plot," writes Sarris about Ford, and you can find plenty of examples here. The most startling single shot in the film, coming right after Booth shoots Lincoln, is one of those mood shots Sarris describes. Ford lingers on a close-up of the wounded president seen through a lace curtain being comforted by his wife, then suddenly pulls focus so that it's the curtain in the foreground, not Lincoln's face behind it, that briefly comes into focus before the scene fades out. You can sense both the life receding from the dying president and Ford's reticence to intrude on such an intimate moment. 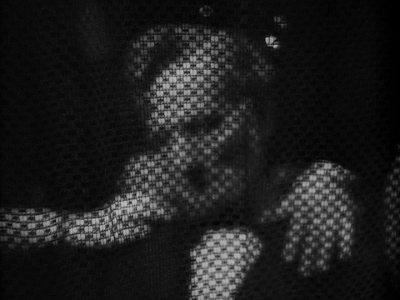 So what's not to like about The Prisoner of Shark Island? Well, the usual things that bother me about many of Ford's movies. For one thing, there are the misplaced attempts at humor, thankfully limited mostly to Mudd's father-in-law, an incongruously comical character who comes across as a cornball Kentucky colonel. Then there's the Ford sentimentality, expressed here through Mudd's idealized family. It's not as maudlin as in some of Ford's work, but in this context the sentimentality seems as jarringly antiquated as something from a D. W. Griffith silent of twenty years earlier. Then in his attempts to be even-handed about the South in the Civil War, Ford makes Southerners seem almost victims of oppression in the style of Margaret Mitchell. Finally, as in too many of Ford's films set in the nineteenth-century South, African Americans are portrayed in a manner that comes precariously close to Uncle Tom stereotyping, not as offensive as in some of Ford's films, but close enough that this viewer was not entirely comfortable with it.

In spite of its mixture of strengths and flaws, The Prisoner of Shark Island has one undeniable asset, the heartfelt performance of Warner Baxter as Dr. Mudd. This is an actor I'm not all that familiar with. I have seen him give a handful of noteworthy performances in the early 1930s—as a mob lawyer in the pre-Code mystery Penthouse (1933) costarring Myrna Loy as a prostitute who helps him solve a murder, as the harried director in the Warners backstage musical 42nd Street (1933), and, also with Loy, as a lovable racehorse-obsessed scoundrel thumbing his nose at rich snobs in the other screwball comedy Frank Capra made in 1934, Broadway Bill. But his work here outdoes those other performances. He avoids the melodramatics of suffering or the self-pity of victimhood that actors so often indulge in with roles of this nature. Baxter's modulation of his facial expressions alone as Mudd undergoes horrendous physical and psychological anguish is a marvel of expressive control. Equally impressive is the way Baxter quietly conveys the nobility of Mudd's belief in his duty as a doctor and his unyielding determination to be proven innocent and be reunited with his family. The main reason I watched this movie was to see if Baxter is as good as I'd heard. He is.

A final observation I have about The Prisoner of Shark Island is that aside from his conviction and imprisonment, practically nothing about Dr. Mudd in the movie  has any historical reality, an example of what David Thomson condemns as Ford's "adherence to legend at the expense of facts." I have no blanket objection to filmmakers playing loose with the facts to create a good tale—filmmakers have been doing this for as long as there have been movies—so long as they acknowledge that their films are fictional and not historical, the "based on a true story" disclaimer seen so often nowadays. In the case of The Prisoner of Shark Island, I would not have known about the creative liberties taken in the film if I hadn't made a point of finding out how much truth there was to Dr. Mudd's story as told here. Still, if you accept the film as a largely fictional work set in the context of historical events, you can appreciate it as Ford's version of one of the great subjects of cinema—the plight of a person wrongfully accused of a crime and his heroic efforts to deal with injustice—made especially compelling by Warner Baxter's expertise at subtly drawing us into Dr. Mudd's emotions.