When I took a cinema course in college, the instructor showed the class Bresson's Diary of a Country Priest, a film in which a young priest finds himself assigned to a diocese in rural France. He struggles in vain to make a spiritual impression on his thoroughly hateful parishioners, enduring the mental anguish of his failure as he suffers the physical torment of slowly dying from cancer. I understood that Bresson intended the young curate's anguish as an expression of transcending earthly pain and failure to a higher level of spirituality. Yet for me watching the film was a grim, torturous, almost masochistic experience in which the contemplation of suffering became an end in itself. I have never been able to watch this type of movie with any enjoyment, and I felt little desire ever to see another film by Bresson. Reading about his later works like Au Hasard, Balthazar and Mouchette only strengthened this feeling. But when I watched Pickpocket recently, I found it a rewarding, if predictably somber, experience. 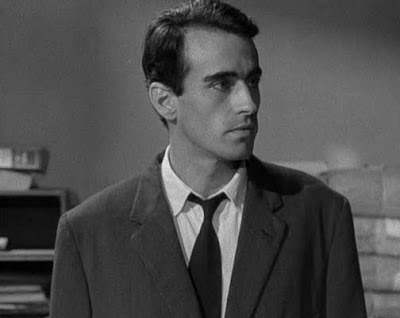 The main character in Pickpocket is a young man named Michel (Martin La Salle, who resembles the young Montgomery Clift). Unemployed, disaffected, but apparently well educated, he lives a solitary, bleak, and impoverished life in a grungy one-room apartment in Paris. One day in the Métro, he observes someone picking the pocket of a fellow passenger and decides to give it a try. Encouraged by the success of his first attempt, he continues. But he's not a professional and is soon arrested. The police don't have enough evidence to press charges, though, and an inspector who recognizes that Michel is no ordinary petty criminal releases him. The two strike up a curious relationship as friendly adversaries in which the inspector tries to convince Michel that crime is not a valid way of life, while Michel tries to convince him that some people are by nature above the law. It's hard to say whether Michel's attraction to thievery arises from practical necessity or really is a philosophical stance; there is probably a bit of each in it. In either case, there is plainly more than a little defiance and self-centeredness in Michel's personality.

Things get really interesting when Michel attracts the attention of a pair of professional pickpockets who then recruit him to work as a third member of their team and teach him the tricks of the trade. At this point the film becomes a fascinating semi-documentary on the techniques of pickpocketing, culminating in a brilliant sequence in which Bresson temporarily abandons his minimalist filmmaking style, which consists largely of lengthy conversations alternating with contemplative shots of his actors' faces, to illustrate the three men at work in a train station. Watch the following clip to admire Bresson's ability to advance the narrative solely through masterful framing and editing. I don't think you'll ever feel safe in a large crowd again.

Running only seventy-five minutes, Pickpocket has the compression of a short story, concentrating exclusively on Michel and eschewing any narrative embroidery like subplots, its only embellishment the stately music of Lully. Michel is given virtually no backstory, expresses few emotions, has no strong emotional attachments, and dwells almost obsessively on a single idea, the Nietzschean one that the concepts of good and evil are relative and do not apply universally to everyone. Bresson preferred to use non-professional actors, and the passive, slightly wooden acting of Martin La Salle seems wholly congruent with the anomie of the character he plays. Nothing in the film is in the least glamorized, and that includes Bresson's direction, which is devoid of cinematic gimmickry or artistic pretension. This austerity of style combined with an emphasis on ideas over action and emotion gives Pickpocket a kind of surface purity. The film has a quality that is difficult to put into words, but if pressed, I would say it seems in some way turned inward upon itself. This introspective quality in Bresson's work seems to be what most strongly appeals to his admirers, and Pickpocket presents it with what I take to be rather greater palatability than most of his films. Only the upbeat ending, which somehow doesn't ring true, keeps me from giving the film a full **** rating.

Sautet's Classe Tous Risques, released only one year after Pickpocket, is in many ways its polar opposite—a visceral, noirish crime thriller to Bresson's cerebral meditation on crime and punishment, the yang to Bresson's yin. In Sautet's film, Lino Ventura plays Abel Davos, a career criminal who has already been condemned to death in absentia, who has been hired along with his partner Raymond to rob a bank courier in Turin before fleeing to France with Abel's family. The robbery is successful, but the proceeds are far less than expected. Their elaborate plans to escape to France end in disaster, with Raymond and Abel's wife being killed in a shootout with police and Abel on the run with his two young sons. Abel has no choice but to seek help from his old criminal cronies in Paris, who send a young man, Eric Stark (Jean-Paul Belmondo, in his first role after his breakthrough performance in Breathless), to help him escape. Along the way, Eric picks up a young actress (Sandra Milo), with whom he begins a relationship. The rest of the film deals with Abel's attempts, aided by Eric, to escape the police. 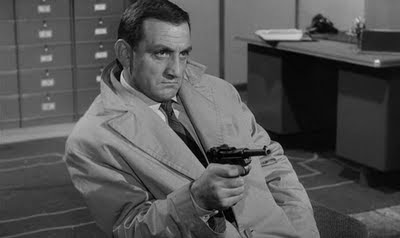 The film sits squarely in the tradition of French film noir of the 1950s and 1960s, the kind of movie directed by Jean-Pierre Melville and Jacques Becker and was in fact written by José Giovanni, who also wrote Melville's Le Deuxième Souffle (1966) and Becker's Le Trou (1960), both excellent films I highly recommend. Like many American and French noirs, Classe Tous Risques places great emphasis on the issue of loyalty among a group of criminals, while taking the genre in unusual directions (the most interesting of which is making Abel a family man). Abel's former cronies in Paris are all criminals who have redirected their energies into legitimate businesses and are now members of the law-abiding establishment—one a bar owner, another a hotelier, a third a jeweler (played by Marcel Dalio). One reason they hire the inexperienced Eric to go to the south of France to bring Abel back to Paris is that none of them is willing to take the risk of doing so himself, the first indication of their ambivalence toward their former ally. When the police locate them and press them to betray Abel, they must grapple directly with the conflicting demands of loyalty and self-preservation.

Abel, by contrast, is an idealist for whom the concept of loyalty is absolute, and in the young Eric he finds a man who shares this attitude, in a sense a younger version of himself who becomes his protégé. In this way, the film resembles those Westerns where the hero finds that his ethos has become outdated and that his inability to adapt to changing times dooms him. Of course, from the beginning of the film there is already the strong air of fatalism endemic to the genre—Abel's status as a wanted criminal and condemned man, the unsuccessful heist, the botched escape, the dependence on unreliable allies, his increasing desperation as the police close in.

As Abel, Lino Ventura is flawless. He combines ruthlessness with honor, toughness with sensitivity in the same way as exemplars of this type of role like Humphrey Bogart and Jean Gabin. Ventura's Abel accepts his fate with the stoicism of the classic film noir antihero, while still persisting in his futile attempts to avoid the circumstances ensnaring him, playing the game right up until the end even though there is little doubt of its outcome. Sautet's direction is also admirable. Unlike Melville, he was not a specialist in this type of film, yet he seems perfectly comfortable with the genre. Classe Tous Risques might not be as well known as more familiar examples of similar movies, but it compares favorably with the best of them and is certainly worth seeking out by anyone with an affinity for French film noir of this era.
Labels: Claude Sautet, Film Noir, French Cinema, Robert Bresson