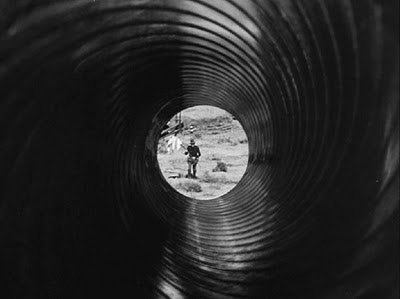 One of the great pleasures of my last few years of film viewing has been the rediscovery of the Western, a genre that once had little appeal for me apart from the classics like Stagecoach and High Noon. Reduced to their essential elements of character, uncomplicated conflict, and the starkly atmospheric landscapes of the American West, how satisfying and unpretentious the Westerns made between the end of World War II and the early 1960s seem to me now. Every once in a while I come across one of these pictures that delivers the expected delights of the genre and more. One film that fits this description is William Wellman's Yellow Sky (1948).

In this movie a group of outlaws rob a bank in a small town and then, pursued by a posse, find no means of escape except by crossing a vast dry salt lake, an undertaking that looks certain to end in death for the outlaws. Their leader is the rather coarse Stretch (Gregory Peck), and his main rival for leadership is the dandyish Dude (Richard Widmark). Predictably, under the pressure of blasting heat, no supplies, and only one canteen of water apiece, conflict within the group builds. Just when it seems as though the men aren't going to make it across the desert, they stumble upon a derelict mining town called Yellow Sky inhabited only by a grizzled old man and his tomboyish granddaughter (Anne Baxter). The power struggle between Peck and Widmark is now further intensified by rivalry for the young woman and also by the discovery that she and her grandfather are hoarding a fortune in gold. 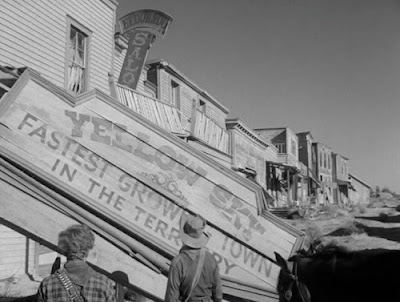 I've always had mixed feelings about Wellman. He seemed drawn to powerful subjects, but aside from A Star Is Born (1937), his movies often strike me as rather perfunctory efforts that fall short of their potential. Even so, one thing Wellman was very good at was bringing out the best in his actors. James Cagney in Public Enemy, Loretta Young in Midnight Mary, Richard Barthelmess in Heroes for Sale, Carole Lombard in Nothing Sacred, Henry Fonda in The Ox-Bow Incident—these seem to me brilliant performances that outshine the movies they're found in. In Yellow Sky Wellman gets excellent performances not only from actors we expect to be good—people like Widmark, here playing another of the menacing characters he specialized in early in his career, and in a supporting role Henry (Harry) Morgan—but also from actors who are less consistent but given the right role and director can be quite good, in this case Peck and Baxter.

Another of Wellman's traits as a director is his ability to keep the picture moving swiftly. While this haste to get on with the action can lead to an impression of superficiality in some of his films, it is actually an advantage in a Western, where maintaining a brisk pace is especially important. Working from a story by W. R. Burnett (he wrote the novels that Little Caesar, High Sierra, and The Ashpalt Jungle are based on, so you know this film's plot is well engineered and dynamic), in Yellow Sky Wellman is well served by his talent for vigorous storytelling.

But the thing that for me really distinguishes this movie is the brilliant photography of Joe MacDonald. For years MacDonald worked for Twentieth Century-Fox, the studio that produced Yellow Sky. He was a gifted cinematographer who seemed to have the ability to provide the exact look appropriate to the project, whether it was the Technicolor CinemaScope of slick entertainment like How to Marry a Millionaire (the first picture shot in CinemaScope at Fox), the high-contrast black-and-white of noirish pictures like The Dark Corner or Pickup on South Street, with their urban setting, or the spacious landscapes of Westerns like John Ford's My Darling Clementine. MacDonald might not have had a distinctive style like that of Gregg Toland or John Alton, but surely such adaptability is a virtue that makes him worthy of greater recognition than he has received.

MacDonald's location shooting in Death Valley and on Owens Lake, a huge salt flat in the Sierra Nevada, adds tremendous atmosphere and authenticity to the bleak narrative of Yellow Sky. He really gives us a strong sense of the roughness of the characters and the harshness of their environment. He was a master of nuanced lighting, and isn't that what black-and-white cinematography is all about? That talent is on full display here, making the limpid desert light and searing heat almost palpable. 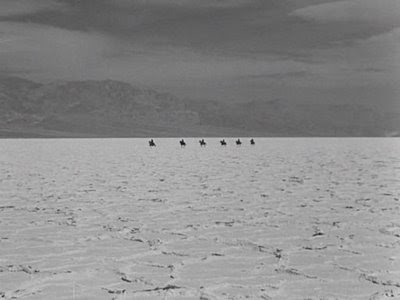 The denouement of the movie at first seemed to me just a bit pat, a little incongruously upbeat given the grim nature of much of what has come before. On reflection, however, I wonder if perhaps the name of the town is an allusion to "The Bride Comes to Yellow Sky"—a short story by Stephen Crane set in the Old West in which a misfit's anti-social behavior is curbed by the positive influence of a woman—and if the outcome of the movie is perhaps modeled on the similar outcome of that story. Like Crane's story, this movie has a somber tone with the mounting tension suddenly relieved at the end by an almost whimsical conclusion. The abrupt shift in tone at the end of the picture did initially startle me, but after I accepted it I found Yellow Sky an excellent film, notable especially for its strong character and pictorial values.