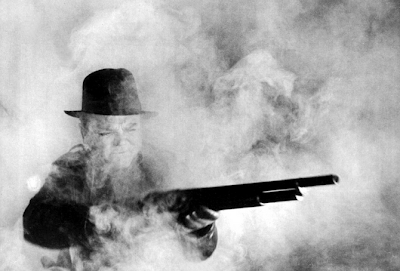 At the peak of his popularity in the 1930s as one of the biggest stars at Warner Bros., James Cagney didn't think much of most of the films—sometimes as many as five or six a year—he was making at the studio. In his autobiography he called them "catch-as-catch-can pictures" with "an insubstantial script that the actors patched up here and there right on the set." One of the exceptions was the film that won him an Oscar as best actor, Yankee Doodle Dandy (1942), the musical biography of the showman George M. Cohan, which Cagney thought was "something I could take real pride in." After Yankee Doodle Dandy, Cagney decided to end his often rocky relationship with Warners, where except for a brief hiatus in 1936-37 he had been making pictures for a dozen years, and along with his brother and business manager William founded his own production company.

After a couple of modestly successful films, the third film Cagney Productions made, a screen version of William Saroyan's Pulitzer Prize-winning play The Time of Your Life (1948), flopped, losing half a million dollars. To pay off the company's debts, the Cagneys signed a distribution deal with Warner Bros., and James Cagney found himself back at Warners making yet another low-budget gangster picture. The picture was called White Heat, and again the actor wasn't impressed with the script, dismissing it as "very formula...without a touch of imagination or originality." He describes how he and the director Raoul Walsh worked hard to give the film a level of quality they felt was lacking in its screenplay. In the end, Cagney modestly called it "a good picture in a number of ways." Most critics and filmgoers, though, view it with far greater enthusiasm, as an electrifying film (in 2008 it was ranked #4 on the American Film Institute's list of the 10 greatest gangster films) in which Cagney gives one of the great performances of his career.

White Heat is the film in which Cagney plays the psychotic gang leader Cody Jarrett. When he first read the screenplay, Cagney found Cody Jarrett "just another murderous thug" like the ones he had so often played at Warners in the 1930s. So he and director Raoul Walsh came up with the idea to distinguish Jarrett from similar characters by emphasizing the aberrant psychology behind his behavior. Prewar gangster films seldom dwelt on the subtleties of motivation behind the criminality of their characters, content for the most part to suggest basic forces like greed, egoism, deprived backgrounds, and a culture of settling conflict by violence. In the years right after the Second World War, though, there was a fascination in American film with all things psychological, and this fascination extended to just about every non-comedic genre of the Hollywood studios. Not long before making White Heat, Raoul Walsh himself had directed the film often cited as the first psychological Western, Pursued (1947). 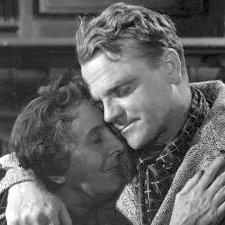 Most of the films made immediately after World War II that attempted to explain their characters' behavior in psychological terms haven't aged well, their simplistic Freudian notions of human motivation long since superseded by more modern concepts. White Heat, however, has avoided this because it keeps things simple rather than simplistic, avoiding the theoretical explanations that today make so many of Hollywood's postwar forays into psychology seem so dated. From quite early in the film it's clear that Cody Jarrett has serious mental problems. His father is said to have died in an insane asylum, and Cody is subject to headaches that incapacitate him with excruciating pain. "It's like having a red-hot buzz saw inside my head," he tells his Ma (Margaret Wycherly) after the first time we see him suffer one of his debilitating seizures. It's also at this point that we see Cody sink into his mother's lap for comfort—for a few moments Cagney's face registers an expression of pure infantile bliss—and we realize that Cody and Ma have a strange and unnervingly close relationship that goes beyond co-dependency. Cagney says that he first suggested the lap-sitting touch to Raoul Walsh, who immediately encouraged Cagney to try it and see if it worked. It did. It's a key scene and one of several scenes in the movie that are unforgettable.

Cody and his Ma have not only a close emotional relationship, but a close working relationship as well. When Cody is arrested for robbery and sent to prison, Ma proves herself more than capable of managing the remaining gang members in his absence. And when Cody later tells one of his gang that he and Ma always split their share of the gang's profit 50/50, it becomes plain that she's a full-fledged member of the gang, just as ruthless as Cody and even more calculating. If Cody is the gang's muscle, Ma is its brain. Moreover, her control over Cody acts as a restraint on his more violent impulses. In the middle of the film, when Cody learns in prison that Ma is dead and has his famous psychological meltdown in the prison dining hall, it's as though an uncontrollable monster has been released. Not surprisingly, the whole tone of the film changes at this point. The emphasis shifts from the psychology of antisocial behavior to violent action—a prison break, Cody's revenge on the members of the gang who have betrayed him, a payroll heist at a petroleum refinery, and a nighttime shoot-out that leads to the famous finale at the refinery.

Holding all this together is Cagney's hair-raising performance as the demented Cody Jarrett. Cagney's attitude toward acting was always that it was primarily a job. "With me, a career was a simple matter of putting groceries on the table," he wrote. "I never thought of myself as anything but a journeyman actor." Without the theoretical underpinnings of the Stanislavski/Actors Studio approach to acting, which he always rejected as too self-indulgent, Cagney relied on his instincts and above all preparation and hard work to put his characters across. And in White Heat it really shows. Cagney might have thought the screenplay of the picture deficient, but something in the character of Cody Jarrett clicked with Cagney's fearless determination to take this character further into psychotic menace than he had ever gone before. The result is the ultimate Cagney gangster, a figure that in comparison to similar characters Cagney played—his Tom Powers in Public Enemy or his Rocky Sullivan in Angels with Dirty Faces, for instance—simply eclipses them with its remorseless evil.

Another trait of Cagney's screen presence that serves him well in White Heat is the sheer physicality of his acting. In his musical and boxing pictures, this physicality is obvious, but it's present to some degree in all his performances. In White Heat you can really see him acting with his entire body, and his control over matching the intensity of his physical presence to the requirements of the scene is remarkable. This physicality can be restrained, as in the scene where he sits docilely in Ma's lap, or in the many scenes in which he menaces other people just with his belligerent stance and facial expression. Consider the scene where after escaping from prison he waylays his two-timing wife Verna (Virginia Mayo) in the motel garage. Mayo was an actress of limited range, but I don't believe she ever topped her extraordinary reactions to Cagney's sinister presence in this scene. I've heard her say in interviews that Cagney was so focused and intense in his acting that he was genuinely scary in those scenes and that little effort was needed to react to him with terror, something which is only too apparent in her facial expressions, and a real testament to Cagney's ability to inhabit a character with utter conviction—even one so completely opposite from his real nature as Cody Jarrett. 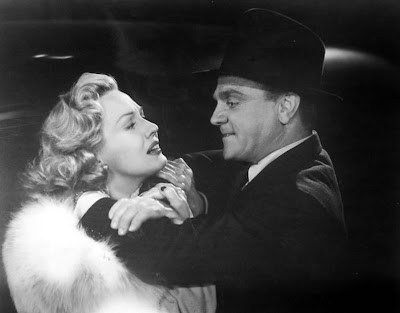 Where Cagney's physical approach to acting shows most forcefully is in the big violent set pieces of the film. One of these is the centerpiece of the film, and it's like nothing else I've seen Cagney do onscreen, except briefly at the end of Angels with Dirty Faces. This is, of course, the breakdown in the prison dining hall, when Cagney first learns that Ma is dead. But if, as Cagney says, the final scene in Angels was planned to be ambiguous—does his character really lose it on the way to the electric chair or is he faking it for the kids who idolize him?—there's no doubt in the dining hall scene in White Heat that Cody Jarrett has completely disintegrated. Reportedly, Cagney planned his reaction to Ma's death in the scene in advance, summoning up the memory of what he had observed as a boy when he visited a friend's uncle at a psychiatric hospital. But he didn't tell the other actors what he had in mind, so that his incoherent, unrestrained response to the news of Ma's death caught the rest of the cast off guard. Watch a three-minute clip of the scene and marvel both at Raoul Walsh's inventive direction and Cagney's mind-blowing acting. And watch the expression on costar Edmond O'Brien's face once Cagney cuts loose for confirmation that Cagney's interpretation of the scene did indeed take the other members of the cast by surprise.

The other big hyperkinetic set piece is the film's sensational conclusion at the refinery. By this point Cody has lost all self-control and even the instinct to survive. He's no longer driven by the need for money, power, or any of the other gains of his criminal behavior. All he has left is his anarchic rage and his compulsion to destroy, and Ma is no longer around to rein him in. The sequence is directed by Walsh in the dynamic style that made his reputation as an action director, but it is Cagney's furiously aggressive physicality in these scenes that propels the film to its incendiary conclusion. The higher he climbs up the petroleum towers at the refinery, the more manic his body language becomes and the more his rage against the world drives his self-destructive actions. When, defiant and unrepentant to the very end, he looks upward and shouts "Made it, Ma! Top o' the world!" just before going up in flames, it's both shocking and pathetic, one of the great movie endings and one of the great movie exit lines of all time. 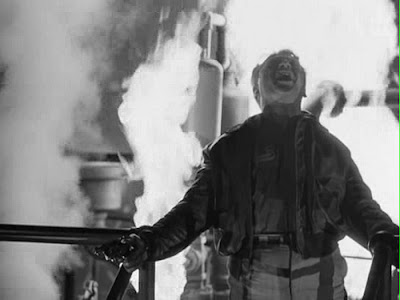