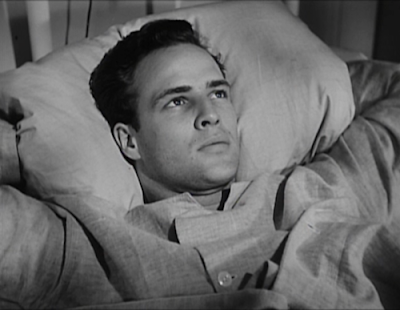 Marlon Brando's performance as Stanley Kowalski in the 1951 film version of A Streetcar Named Desire made him a movie star. So closely identified is Brando with that character that many people believe it was his first screen appearance. But it wasn't. A Streetcar Named Desire was actually the second film he made. A year before making Streetcar, Brando starred in a modest film produced by Stanley Kramer and directed by Fred Zinnemann about the problems of a paraplegic ex-soldier, The Men.

Brando plays Bud Wilocek, a young man who was shot in the back by a sniper in the closing days of the Second World War and is now paralyzed from the waist down. He has been languishing in Veterans Hospitals for four years without making any significant physical or psychological adjustment to his disability. When we first see Bud he is having a nightmare, and it soon becomes clear that he is a depressed and bitter man. Dismayed at Bud's lack of progress, the physician in charge of his treatment, Dr. Brock (Everett Sloane), decides to move him from a private room to a ward in the hope that this will force him to socialize with other patients and bring him out of his lethargy and self-pity. The three other patients in his section of the ward find it difficult to relate to Bud's sullen attitude. One of them, though, a Latino named Angel Lopez, treats him with more patience than the others and manages to reach him. Eventually, following the upbeat Lopez's example of dedication to physical rehabilitation, Bud begins to emerge from his self-imposed isolation and at last to make both physical and psychological progress. 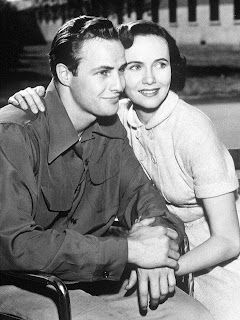 Matters become complicated when Bud's girl friend from before his injury, Ellen (Teresa Wright), seeks him out to try to resume their relationship. For four years he has refused to see her, viewing the future of any relationship as hopeless. But she persists and slowly succeeds in thawing him emotionally, to the point where he agrees to marry her. An hour into the movie, the Bud we now see is a quite different person from the man we met at the beginning. Ellen seems to have motivated him to make a real effort to adjust to his condition and adopt a more hopeful attitude toward the future. After being married in the chapel at the hospital, they go to their new house, the first time Bud has lived away from a hospital since his injury. But things do not go well that first day. Ellen suddenly gets cold feet, and when Bud senses her trepidation he reacts with anger and moves back to the hospital. With disappointment on both sides, it's questionable whether the young couple will ever get back together.

The Men is an early example of a kind of American film that really began with William Wyler's The Best Years of Our Lives—the postwar film that sought to place a personal story in the context of a social problem and to present that problem realistically and informatively. Before directing feature films, Zinnemann worked for years as a director of documentary shorts, and in The Men that background is evident right from the beginning, as Dr. Brock speaks to a group of women—mothers, wives, and fiancées—about the nature of paraplegia and its implications for personal relationships. "The word walk must be forgotten," he tells them bluntly. "It no longer exists." It's the kind of explanatory narrative passage Zinnemann had used in the first minutes of The Search (1948) to describe the process of dealing with displaced children after WW II and would use again in the opening of The Nun's Story (1959) to document the way novitiates train to become nuns.

Today we are familiar with films about the kinds of social and medical problems dealt with in The Men, but in its day it must have been seen as an example of a new kind of movie, one that treated such subjects with unaccustomed candor and seriousness. One thing that makes The Men so effective at this is the amount of realistic detail in the picture. Much of it was filmed on location at the Birmingham VA Hospital in Van Nuys, California, and several dozen actual patients of the paraplegic ward at the hospital appear in the film. Fred Zinnemann and the writer, Carl Foreman, did a great deal of research in preparation for the picture, and that attention to realism shows.

Marlon Brando did equally meticulous preparation for his role as Bud. For a month before filming began, Brando lived as a patient at Birmingham VA Hospital. For the first three weeks he was at the hospital, the other patients didn't know he was an actor. He lived as a paraplegic, experiencing and absorbing as much as he could. He even learned to use a wheelchair expertly, as you can tell when you see him rocketing down the hallway of the hospital and deftly maneuvering around obstacles or playing wheelchair basketball with real paraplegics. To say that Brando was researching his role seems too mild a way to describe the lengths he went to for authenticity. 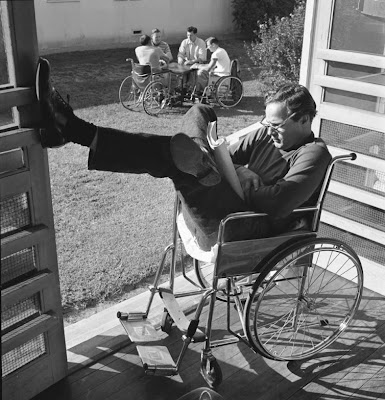 Marlon Brando on the set of The Men

Brando is probably the film actor admired by fellow film actors above all others. Time and again I've heard actors say how affected they were by him and how he inspired them in their craft. They often say how real he seems on screen. Yet Brando has never struck me as a realistic actor. Despite the Method's fundamental tenet of actors reaching deep inside to find a connection between themselves and the character they're playing, I've generally found Brando the actor to be highly mannered. Sometimes this can be hugely effective, as with his flamboyant, sinister/comical Stanley Kowalski. One exception to the high level of artifice found in so many Brando performances is his Terry Malloy in On the Waterfront, which seems on the whole a very honest job of acting. His Bud in The Men is another performance I would call honest.

I suspect that Brando must have burned out on screen acting within a few years. Perhaps this is why his Bud in The Men seems so fresh. There's a very unaffected quality to Bud not found in most of the characters he played later. In those later performances, Brando sometimes strains so hard to locate the uniqueness of the character that he comes perilously close to caricature. In Bud, though, he creates a character who cannot be reduced to a set of mannerisms, a complex young man—and Brando does seem very young, at times almost boyish—who embodies the opposing qualities of anger and sensitivity. Brando makes us believe that these are not contradictory traits, but that they coexist innately in Bud. It's an impressively natural performance, one without the sense of contrivance of his later work. Brando's presence alone makes The Men worth watching, not just for its historical interest as his first appearance on screen, but also for the quality and openness of his acting.

Unfortunately, the rest of the cast is not always as consistent as Brando. In The Men we can witness a whole range of acting styles. As fellow patients, Richard Erdman and Jack Webb (yes, Sgt. Joe Friday himself) give controlled performances, as does Teresa Wright, who conveys with great subtlety the initial determination and later irresolution of Ellen. As Dr. Brock, though, Everett Sloane is prone to overacting and speechifying. Interestingly, in a scene late in the film between him and Brando, when Bud is venting his full anger to Dr. Brock, Sloane holds back to let Brando dominate the scene and in his restraint does his best acting in the film.

The non-professional actors in the film also show varying degrees of ability. Arthur Jurado, the real-life paraplegic who plays Angel (apparently he died not long after making the film) is quite affecting and natural. Some of the other non-professionals portraying patients, however, seem amateurishly overemphatic. This is especially obvious in a scene where a group of these men meet to determine how to deal with an instance of Bud's serious misbehavior. Besides the inconsistency of the acting, my chief complaint about the film is the heavy-handed music score by Dimitri Tiomkin. The low-key style of the film is not well served by Tiomkin's overbearing and seemingly incessant music.

If the idea of a movie about war injury no longer seems as novel as it must have in 1950, the subject itself is one that has just as much relevance today as it did then. In the film Bud received his injury in the closing days of the Second World War. But just a month before The Men was released, the Korean War began. Since then we have had Vietnam, the Gulf War of the early 90s, the Serbian conflict of the late 90s, and now Iraq/Afghanistan. If today the plight of soldiers suffering war injuries—both physical and psychological—has become a subject films tackle routinely, we can thank movies like The Men for making this so.