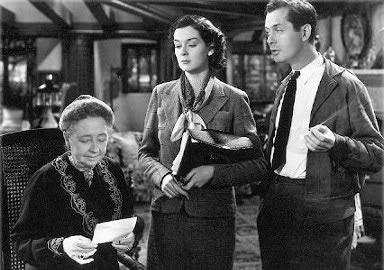 In a secluded house on the outskirts of a small English town live a wealthy dowager, Miss Bramson (Dame May Whitty), and her spinsterish niece Olivia (Rosalind Russell), whom the irascible and demanding old woman treats like an unpaid servant. Into this atmosphere of power struggles and repressed frustration comes a male stranger, a charming Irishman named Danny (Robert Montgomery) who immediately sets about beguiling the old woman and trying to seduce the niece. At the same time, the countryside is on edge because of the ongoing search for a missing woman whom the police are convinced has been murdered.

When the missing woman's body is found buried near the house—minus its head—both the village and the household are thrilled and terrified by the prospect of a sadistic killer on the loose. At least the women now have a man to protect them—the charming Danny, whom Miss Bramson has hired as a resident handyman. If the village is fascinated by the mystery of what happened to the murdered woman, Olivia with her morbid, overactive imagination is preoccupied with a mystery of her own: Exactly what is in that battered old hatbox Danny keeps hidden under his bed? It couldn't possibly be . . .

These are the ingredients of the deliciously entertaining psychological thriller Night Must Fall, based on the play by the Welsh playwright and actor Emlyn Williams. The effectiveness of the film owes less to the functional but uninspired direction of Richard Thorpe (despite his 185 credited films, he wasn't even mentioned in Andrew Sarris's The American Cinema and was dismissed in Sarris's "You Ain't Heard Nothin' Yet" in one word—"weak") than to its clever plot—by turns both chilling and amusing—the atmospheric photography by veteran cinematographer Ray June, and the strong performances by its three lead actors.

Dame May Whitty was a British stage actress who played Miss Bramson in both the London and New York stage versions of Night Must Fall and at the age of seventy-one came to Hollywood to repeat the role for MGM's film version. For the next few years she alternated between Britain and Hollywood. From 1940 on she remained in the U.S., playing colorful, often eccentric English dowagers, many of whom, like Miss Bramson, combined both likable and unlikable qualities. (She was most effective, however, in her one purely evil role, in the 1945 film noir My Name Is Julia Ross.) As the miserly hypochondriac Miss Bramson, she creates a cantankerous but in her own way engaging character, brow-beating her servants and bossing her niece while falling helplessly for the meretricious attentions of Danny. That she responds so willingly to his transparently calculated campaign to charm her actually makes her seem a rather pathetic and lonely figure. Whitty's performance as Miss Froy in Alfred Hitchcock's The Lady Vanishes (1938) might be better known, but her performance in Night Must Fall is my own favorite and brought her the first of two Oscar nominations for best supporting actress. (The other was in 1942 for Mrs. Miniver.)

The central role in Night Must Fall is Danny, and Robert Montgomery has a field day with this showpiece role—played on the stage by the play's author, Emlyn Williams—dominating every scene he's in. This isn't just the actor stealing scenes, but is written into the part and is actually the most prominent trait of Danny. A complete narcissist, he must be the center of attention at all times, adjusting his personality as necessary to make sure of this. He entertains, amuses, and flatters Miss Bramson, acting boyish and telling how much she reminds him of his dead mother. When he tucks her into bed, singing "Rock-a-Bye, Baby" to her while she purrs like a cat, we know that she is completely in thrall to him. To Olivia he behaves at times like a fellow victim suffering the petty tyranny of Miss Bramson with amused forbearance, at other times with undisguised, almost aggressive sexuality.

No matter what mood Danny's patter, facial expressions, and body language express, that mood never registers in his eyes. From the moment he swaggers into Miss Bramson's sitting room, coolly taking stock of the house and its residents, his unblinking stare reveals behind his eyes . . . nothing at all. By the end of the movie, it's plain that Danny is a psychopath. Indeed, he exhibits many of the classic traits of the psychopathic personality. Superficial charm, pathological lying, cunning manipulation of those around him, lack of empathy with others, no sense of guilt—it's all there concealed under a facade calculated to please whoever he's with at the time and achieve his goals of the moment. "You haven't any feelings at all," the horrified Olivia says to him when she finally realizes how disturbed he is. "You live in a world of your own. Of your own imagination."

By the time he made Night Must Fall, Robert Montgomery had for several years been one of MGM's major male stars. Specializing in light romantic comedies, he often played the male lead alongside the studio's biggest female stars like Norma Shearer or Joan Crawford, where he generally came off as elegant but bland. Given that Danny was quite a departure from the kind of role he usually played, his ability to handle the demands of the part is remarkable. Montgomery nails the deviousness, the manipulative charm, and the menace of the character precisely. He was nearly thirty-three years old when he made the film and probably a bit old for the part, but his slightly puffy and dissolute look fits the character well. For his performance he earned a well-deserved Oscar nomination as best actor.

This brings us to Olivia and the actress who plays her, Rosalind Russell. Like Montgomery's Danny, the role was a departure from what she was known for. When she was cast as Olivia, Russell had been working at MGM for three years, but the studio had never really known what to do with her. When she wasn't being loaned out to other studios, she was typically cast in dramatic films as an upper-class sophisticate in roles Metro's bigger stars weren't interested in. She was desperate to break out of this mold, and when she got the part of the naive, rather frumpy Olivia, it must have seemed serendipitous.

The part doesn't have the flamboyance of Miss Bramson or Danny, and she could easily have been overpowered by her costars. Yet Russell is able to hold her own against them by taking a character who is in conception rather two-dimensional, really more a type than an individual, and giving her unexpected contours. Olivia may be inexperienced, dreamy, and subjugated by her domineering aunt, but Russell brings out other qualities that balance these. For one thing, she makes it clear that Olivia is quite intelligent. When she quickly and accurately takes the measure of Danny—calling him "common, conceited, insolent, and completely double-edged"—Russell's manner makes it plain that this is the result not of petulance or envy of his power over her aunt, but of shrewd observation and insight into his psychology.

Even if she realizes all is not quite right with Danny, her reaction to him is a complicated one—equal parts suspicion, alarm, and fascination. That fascination is the result of a barely disguised streak of rebellion. She recognizes how he's playing up to Miss Bramson, yet she can't help admiring how he's able to control her aunt in a way she cannot. And as Danny realizes, she's bored and frustrated, craving the promise of adventure with a hint of danger that a bad boy like himself offers. You have only to think of how Olivia might have been played by a more passive actress like Joan Fontaine to see how Russell fortifies the character with an inner strength of will that keeps her from becoming the conventional damsel in distress she might have been.

As Night Must Fall races toward its rousing conclusion, it contains one scene in particular that is unforgettable. Years ago I saw a community theater production of the play, and this is the scene that stayed in my mind above all others. As the net closes in on Danny and he suffers a total psychic breakdown, Montgomery delivers an electrifying monologue which takes you right inside Danny's mind as his ego contracts and finally collapses. Watch for it. It's the most gripping moment in the movie, the finest moment of Montgomery's amazing performance, and the one time in the film you can actually empathize with the charismatic but destructive Danny.

This post is part of the LAMB Acting School 101 event on Rosalind Russell sponsored by the Large Association of Movie Blogs. Click here for more details.