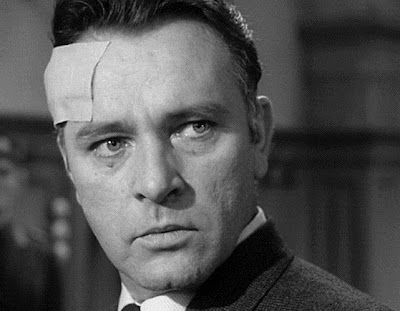 A few weeks ago I wrote about The Ipcress File, one of the finest of the Cold War spy films of the 1960s. Just months after that film was released, another Cold War spy thriller that ranks among the very best films of its type was released—The Spy Who Came in from the Cold. The first of many movies and television shows based on the works of John le Carré, it introduced filmgoers to the peculiar—and very British—espionage world of le Carré, a world whose surface of utter mundanity masks an interior of deception, treachery, betrayal, and psychological manipulation as distorted and illusory as Lewis Carroll's Wonderland.

The film opens in Cold War Berlin in the dead of night with an impressive two-and-a-half minute tracking shot behind the credits that is sure to have you thinking of Touch of Evil. Starting in East Berlin, the camera slowly draws back through the no-man's land between the two sectors, pausing occasionally for a new vantage point before finally stopping at Checkpoint Charlie. The area is almost completely deserted, its darkness punctuated in classic monochrome film noir style with bright pools of light and reflections off damp, glistening cobblestones. Finally we see Alec Leamas (Richard Burton), the head of British intelligence in Berlin, waiting inside the guards' shed for the arrival of one of his East German agents. Just as the agent, riding a bicycle, enters the area between East and West, something goes horribly wrong, and Leamas watches helplessly as his man is shot down by East German border guards. 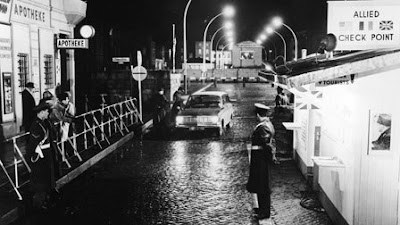 This is the end of the line for Leamas. He returns to London a burnout case and is soon working at a menial job as a library assistant, a surly depressive who drinks too much. The one bright spot in his life is a budding romance with a young woman who also works at the library, Nan Perry (Claire Bloom). After a drunken brawl with a shopkeeper, Leamas loses his job and is sent to prison. Released from prison and with no prospects in view, he is approached by a man who purports to be from a prisoner aid society but who ends up taking him to a Soho strip club and introducing him to a shady foreigner who offers a large sum of money if he will tell everything he knows about British intelligence to a "reporter," in other words, a Communist spymaster.

But Leamas's seemingly simple plan to reveal his secrets, take the money, and quietly drop out of sight suddenly becomes a great deal more complicated. He finds himself exposed, forced to defect to the East, and inextricably caught up in life-and-death power conflicts within East German intelligence. Friends have become enemies, enemies have become friends, and in this topsy-turvy world the only thing he knows for sure is that he can't trust either side. From British station head in Berlin to alcoholic traitor trapped behind the Wall, Leamas seems to have hit bottom. Or has he? For in le Carré's spy world, the only certainty is that things are seldom what they seem.

Typically for le Carré, a large part of the film's appeal lies in trying to figure out, along with the characters, what is really happening. As the plot develops, surprise revelations tell us that what appears to be happening might not be the full story, that like the people in the film we are possibly being subjected to an elaborately orchestrated narrative intended to mislead, and in the face of this constantly shifting reality we are soon caught up in their paranoia. The entire film has the wintry look and aura of despair, its bleak mood underscored by the drabness of the film's settings and the crisp, stark black-and-white cinematography of Oswald Morris.

Even with all its other assets—including an excellent supporting cast, with Oskar Werner a particular standout as Leamas's East German control—the biggest thing the film has going for it is Richard Burton. At this point Burton was at the peak of his career, over the space of a couple of years turning in one brilliant performance after another, not only in this film, but also in Becket, The Night of the Iguana, and Who's Afraid of Virginia Woolf? Burton could rant and rave and ham it up with the most grandiose screen actors, but in these performances he opted for a restrained approach, emphasizing the inner anguish of the character over emphatic external vocal and physical gestures.

His Alec Leamas is a broken and disillusioned man. Recruited for British intelligence while still in his teens because of his linguistic abilities, he has over the years been slowly worn down. The world of espionage is one that operates in a culture of the end justifying the means. As his control in London tells him, "Our policies are peaceful, but our methods can't afford to be less ruthless than those of the opposition." But after years of double-dealing and triple-dealing and seeing human life treated as a disposable commodity, he has begun to see his job as inhumane and futile. Burton lets us see the pain in Leamas's dead eyes, the hopelessness in his apathetic movements and facial expressions, and the emotional numbness in his guarded, muted reactions. In his one emotional outburst, Leamas tells Nan what it really means to be a spy in a speech that could also serve as a concise statement of le Carré's own views on the subject:


What the hell do you think spies are? Moral philosophers measuring everything they do against the word of God or Karl Marx? They're not. They're just a bunch of seedy, squalid bastards like me. Little men. Drunkards, queers, henpecked husbands, civil servants playing cowboys and Indians to brighten their rotten little lives.

The only person in the film not ruled by this cynical ethos of expediency is the idealistic Nan. Leamas's life before Nan has apparently been one of isolation. He has no emotional attachments, and his only friendships are with others involved in espionage. Nan is the only person with whom we ever see Leamas form an emotional connection. When Leamas tries to protect her from becoming involved in the danger that pervades his life, only to see her dragged unwittingly into it and used as a pawn in the machinations of both sides, he feels that he has been betrayed and that her naiveté has been exploited and corrupted. This realization leads directly to the film's conclusion, with Leamas literally atop the Berlin Wall in the glare of searchlights and forced to decide which way to jump. It's an electrifying finale that reduces to the simplest terms possible the decision that will determine Leamas's fate. 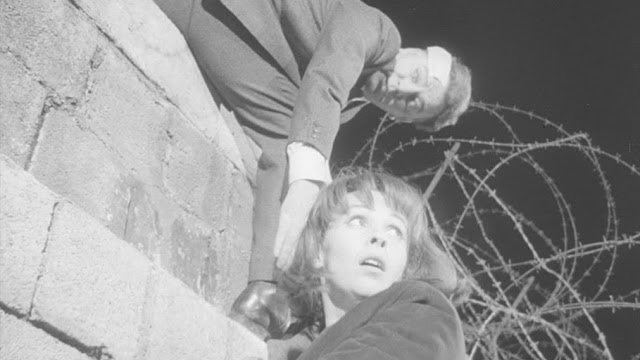