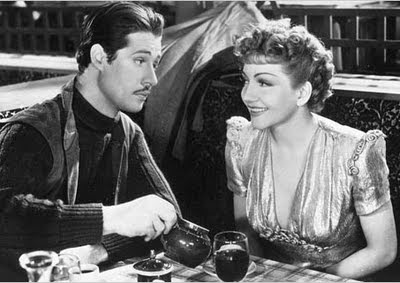 In the late thirties and early forties, Billy Wilder and his writing partner Charles Brackett seem to have turned for inspiration time and again to the great European fairy tales. They created their own version of  "The Beauty and the Beast" in Ninotchka (1939), with Greta Garbo as the beast humanized by the love of Melvyn Douglas. In Ball of Fire (1941) they stood the tale of Snow White and the Seven Dwarfs on its head by making the dwarfs monklike scholars and Snow White a slangy night club singer named Sugarpuss O'Shea. And in Midnight (1939) they offered their own playful interpretation of "Cinderella," with Claudette Colbert as the penniless heroine who finds wealth and love granted her through the intervention of a kindly benefactor.

Claudette Colbert is Eve Peabody, a gold-digging chorus girl who arrives in Paris on the Monte Carlo train in the dead of night, with no luggage, no money, and only the dress she's wearing, which happens to be a gold lamé designer evening gown. She's soon being driven around Paris by taxi driver Tibor Czerny (Don Ameche), a Hungarian émigré, in an unsuccessful search for a job as a night club singer. When Tibor offers to let Eve spend the night at his apartment while he's out driving his cab, Eve, sensing the clear sexual attraction between the two, ditches him. There's no way this single-minded gold digger is going to become romantically involved with a poor man, even if she does love him.

Eventually Eve crashes a ritzy musical party, where she encounters a young champagne baron (Francis Lederer) who instantly becomes besotted with her. She also meets the possessive wealthy woman he's having an affair with (Mary Astor) and her older husband (John Barrymore). Before long, Eve finds her every wish spontaneously coming true—an apartment at the Ritz, a car and chauffeur, a brand new designer wardrobe, and a fantasy identity as the Baroness Czerny. This Cinderella's benefactor, though, is not a fairy godmother, but a fairy godfather in the form of Barrymore, who hopes to use Eve to lure his wife's lover away from her. In the meantime, Tibor has enlisted the cab drivers of Paris in a search for the missing Eve. The race is now on. Will Tibor find Eve before it's too late and she's trapped in a loveless marriage to millionaire Lederer?

As in all comedies based on impersonation, it's the unforeseen complications that ensue which are important, which move the plot along and provide the laughs. Wilder and Brackett keep the complications not only coming steadily, but building in intricacy and hilarity as one deception leads to yet another. The plot reaches its farcical third act at a country house party with Eve and Tibor each trying to top the other's fantastic explanation of their outlandish behavior, then finally moves to the courtroom for an even more farcical finale that in American screwball comedy ranks right alongside the courtroom scenes in Mr. Deeds Goes to Town and The Awful Truth. Wilder and Brackett also keep the bon mot-packed dialogue (and the sexual innuendo) coming fast, and the skillful cast handles it with aplomb, casually tossing out Wilder and Brackett's clever dialogue as though it's ordinary conversation with an unusually large quotient of intelligence and wit.

In fact, with all its other fine qualities—the beautifully crafted screenplay by Wilder and Brackett, the polished direction by screwball comedy expert Mitchell Leisen (Easy Living, Hands Across the Table, Hold Back the Dawn), and that glossy Continental opulence Paramount excelled at—in the end it's the great cast that really puts Midnight across. Hedda Hopper plays the imperious matron hosting the musical soirée in one of the last of her 140 film roles before moving into radio and journalism (her famous celebrity gossip column had debuted a year earlier). A scene-stealing Monty Woolley plays the crotchety judge in the courtroom finale; that same year he became a Broadway star in The Man Who Came to Dinner and just two years later a leading film actor in the movie version of that play. Rex O'Malley gets in some of the best quips in the film as Mary Astor's Noel Cowardish friend, a forerunner of the gay pals who have become so common in recent years.

Astor, her screen career still unsteady after the divorce scandal a couple of years earlier, makes the most of her rather thankless role as Barrymore's neurotic, self-centered wife. Whenever she's in the presence of Colbert, she becomes the green-eyed monster personified, her bitchiness a good warm-up for her Oscar-winning performance in The Great Lie (1941). But she does manage to humanize the character by making us see the helplessness of her foolish infatuation with Lederer and the hurt of her rejection when Colbert suddenly appears on the scene. Don Ameche, best known for the musicals he made at Fox in which he typically played the second male lead, gets one of the best roles of his career. Like his work in Heaven Can Wait (1943) for Ernst Lubitsch, Midnight shows that when given a well-written part and a sympathetic director, he was a more proficient actor than he's generally given credit for.
But for me the most fascinating performances in the film are by Claudette Colbert and John Barrymore, and some of my favorite scenes are the ones between these two. Consider the scene at the musical party where they first meet. Eve has sneaked into the party and sits next to Barrymore during the musical performance. To watch these two pros act the scene almost entirely with their facial expressions and not a word of dialogue—this is where their experience in silent film really shows—is a treat not to be missed. Every expression, every glance, even the subtlest shift of position as they sit tells us something about their two characters—Barrymore casually watchful and catching on to the situation with lightning speed, Colbert anxiously watchful while trying to appear casual as servants search for the party crasher. Barrymore reportedly had trouble remembering his lines (the effects of years of alcoholism were becoming evident by this point, and at times he does look rather dissipated), but it's certainly not apparent as he carries on a number of extended conversations with Colbert in long, unedited takes. Known for his heavily dramatic performances, Barrymore responds to the comedic tone of the film with a marvelously light touch, and he and Colbert have such tremendous rapport that you can almost sense their pleasure in working together.

Claudette Colbert, like her great contemporaries Irene Dunne, Barbara Stanwyck, and Katharine Hepburn, was adept at both drama and comedy. But I have always preferred Colbert's comedic performances to her serious ones, and this is simply one of the best performances of her career. Her Eve Peabody might be money mad and impulsive, but Colbert gives us a good sense of Eve's better qualities—the spirit of adventure with which she approaches life, her stoical acceptance of life's unpredictability ("Every Cinderella has her midnight," she observes at one point), and the way Eve's vulnerability to love interferes with her dedication to the pursuit of a rich husband. She's a person whose mercenary carapace conceals a soft center. It's a character not all that different from the one she would play a few years later for Preston Sturges in The Palm Beach Story, a film that would make a wonderful double feature with Midnight.

Coming near the end of the heyday of screwball comedy and in such a notable year in American film, Midnight isn't as well remembered today as it deserves to be. It might not have the pointed social agenda of Capra's screwball comedies, the mania of Howard Hawks's, or the physical comedy of Leo McCarey's. But it does have a great deal to recommend it, and for me it ranks right up there with the best and funniest of the genre, with one of Wilder and Brackett's best engineered and sweetest screenplays and Mitchell Leisen's best job of directing. It also has some of the most accomplished acting to be found in a film of this type, with one of Claudette Colbert's very best performances, close to Don Ameche's best (I'd give that honor to Heaven Can Wait), a hint of the great things soon to come for Mary Astor, and the opportunity to see the older John Barrymore still in dignified command of his prodigious acting skill.