THE SON (2002) ***
In my continuing efforts to update my knowledge of the foreign language films of the last twenty years, I recently watched my first work by the Dardenne brothers, Jean-Pierre and Luc, from Belgium. It's the thirteenth film of fifteen they've co-directed, most of them also written and produced by the Dardennes. It's also one of their most highly lauded, having received a special jury prize at Cannes and been nominated for the Palme d'Or. 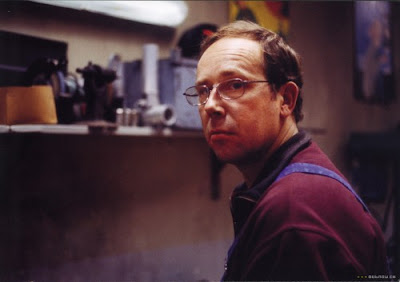 The main character is Olivier (Olivier Gourmet, above, who is excellent and deservedly received the best actor award at Cannes), a carpentry instructor at a school for troubled teenagers, and the film opens with the director of the school proposing to enroll a new student, Francis (Morgan Marinne), in Olivier's program. But when Olivier sees the student's dossier, he has a strong reaction and tells the director his class is full. Olivier eventually relents but seems obsessed with the boy—stalking him, stealing his keys from his locker and sneaking into his apartment, and behaving bizarrely whenever around him.

Olivier seems to have no life outside his work, although we do get a glimpse of his austere apartment, where we witness an uncomfortable encounter with his ex-wife. He also seems to have no emotions aside from the extreme agitation he expresses when alone or around Francis. Francis, on the other hand, grows more attached to Olivier despite his cold treatment by the older man and at one point even asks Olivier to become his legal guardian.

For nearly the first half of the film, we are given no context for the relationship between the two or for Olivier's strange attitude toward the young man. So reticent is the film on this point that it almost seems Olivier might be a pedophile trying to resist his impulses toward Francis. He's not, but the exact nature of the relationship is only hinted at in a couple of places before being revealed midway through. For the first half of the film we are given little but Olivier's unrelenting anxiety around Francis and the mystery of its cause. This rather contrived approach strikes me as less ambiguity than coyness on the part of the directors, and I think it is a misstep that weakens the movie by forgoing any attempt at engaging the viewer's emotions in favor of piquing our curiosity and testing our patience by withholding information, a strategy I found more tedious than suspenseful.

The look of the film is certainly startling, though, and along with Gourmet's intense performance is one of the movie's great strengths. The directors shoot almost everything in tight close-up, following the actors with a hand-held camera. This might sound gimmicky but doesn't come off that way, instead lending the movie a sense of immediacy and authenticity and keeping the focus firmly on characters rather than on events or pictorial composition. It also emphasizes the emotional repression of Olivier.

I did observe that the movie was co-financed by Belgian television (which might partly account for the talking heads style) and also read that it was shot in 16mm and blown up to 35mm. The version I watched was in widescreen (with a 1 : 1.66 aspect ratio), and I couldn't help noticing that the tops of the characters' heads were often out of the frame. I'm wondering if the movie was originally filmed in an aspect ratio of 1 : 1.33 and later cropped for theatrical distribution. This would tend to emphasize even further the closeness of the camera to the actors and could account for the awkwardness in framing that was frequently noticeable.

The acting and direction of The Son are unquestionably impressive. The script, however, has weaknesses that are impossible to overlook. That the movie becomes so much more compelling in its second half makes the first half seem all the more obscure and padded. On the whole, I would say this is a good movie whose potential greatness is undermined by some of the artistic decisions of the Dardennes in their capacity as screenwriters.

YI YI (2000) ***
If The Son gives us too little information, this movie, a multiple-prize winner from Taiwan, goes in the opposite direction and gives us too much. I knew I was having problems with this narrative overload when halfway through the nearly 3-hour long film I began fidgeting and checking to see how much longer it was going to run. The movie opens with a wedding that introduces us to the main characters, an upper middle class Taipei family, each of whom is confronting his or her own problems.

The father is coping with strains not uncommon to middle-aged professionals everywhere: a marriage that has grown stale, ethical problems at his work (an IT firm), doubts about the life decisions he has made, and the nagging feeling that his life is going nowhere. The wife, a lawyer, is dealing with both her seriously ill mother and severe depression. The teenaged daughter experiences a disappointing first love, while the young son is being bullied by schoolmates and family alike.

The problem is that with all this potent material to work with, the director, Edward Yang, simply doesn't know when to stop. For one thing, he tends to overindulge a fondness for slow, lingering shots. (Perhaps it's understandable that Antonioni was reportedly one of Yang's favorite directors.) These can be quite effective when used sparingly—for example, when a character who has just had a moving experience simply sits for a while and absorbs it—and as one who generally abhors aggressively kinetic music video-style editing, I feel guilty complaining about this.

But Yang uses the dilatory approach even when there is no good reason. For instance, someone opens the door to the apartment and walks in: First we have a shot of the empty hallway lasting several seconds. Then we hear a door off the hallway open and close, and a few seconds later someone walks into the hallway, turns, and walks toward the camera for several more seconds. Now we cut to the same person walking into the living room, who then walks away from the camera for several seconds before putting down his things, wandering around the room for a few seconds, and slowly sitting down on the sofa. None of this is in aid of any discernible thematic or even dramatic purpose: these people have problems, but ennui doesn't appear to be one of them. What should have taken a few seconds has lasted 30-60 seconds. Calling Jean-Luc Godard!

Even more distracting is the overdevelopment of subplots that eventually become full-blown digressions that divert attention from where it should be—on the father re-evaluating his life. In particular, far too much time is devoted to rambling subplots about the flaky brother-in-law and the young son (after all, the movie isn't The 400 Blows). Not content to show us the touching story of the daughter's unhappy first romance, in a startling shift of tone Yang embellishes it with a gratuitous and sensationalistic conclusion that involves sexual abuse of a student by a teacher and a triple murder. These and other divagations at times turn into soapish melodrama that undercuts the film's otherwise mature and thoughtful tone.

The strong parts of Yi Yi are very good indeed, and it is well worth watching just for these. But at points the film seems in danger of foundering under the weight of its accretion of superfluous detail. There is no denying that Yang, who died in 2007 at the age of 59, was a director of great talent. But Yi Yi, his eighth and last film, is kept from greatness by its overly ambitious desire to include everything and leave out nothing.
Labels: Asian Cinema, Brief Reviews, European Cinema