The Children Are Watching Us, made in 1942 but not released until two years later, is a superior tearjerker that, being told largely from a child's point of view, anticipates Shoeshine and The Bicycle Thieves. The child is a boy about five years old, Pricò. His family is middle class: The father works as an accountant, they live in a modern apartment block in Rome with a live-in housekeeper, and the mother is secretly having a love affair. The movie opens with his mother taking Pricò to the park to watch a puppet show, after which she sends him off to play while she meets her lover, who is trying to pressure her into running away with him. Unknown to her, however, Pricò is watching from a distance, and although he doesn't really understand what is happening, he knows instinctively that it is something which threatens the security of his comfortable life.

This sequence sets the tone of the rest of the movie. As Pricò observes from a distance, we see nearly everything that happens from his point of view. When his mother abandons the family for her lover, we see his sadness and confusion, and we share his sense of being lost as he is passed from one relative to another, each one less sympathetic and caring toward him than the last. We also sense his joy when, after he becomes seriously ill, his mother returns. But even though she resolves to break off her relationship with her lover, he is so persistent that she eventually finds herself torn between him and her child.

De Sica's attitude toward the behavior of the adults in Pricò's life—his father, the housekeeper Agnese, the mother, and her lover—is quite objective. He makes us understand the complexity of their relationships, how the feelings and desires of each conflict with those of the others and also the incredible difficulty of the decisions they must make. He guides the actors who play these parts to restrained performances that convey only too clearly their quiet inner turmoil over their choices. (His attitude toward the other adults in the movie is much less tolerant, their negative qualities exaggerated almost to the point of satire.) Yet in the end they are always guided by their own emotions even though they are aware of the unfortunate effects their choices will have on others. Sadly, it is Pricò, who has no say in their actions, who always ends up suffering the most.

A seaside holiday intended to be a celebration of his parents' reconciliation provides some terrific set pieces including a magic show at the hotel where they are staying, encounters with a group of decidedly odd fellow vacationers, and a very touching episode absolutely typical of early de Sica in which Pricò runs away and tries to get back to his father, who has already returned to Rome, after he sees his mother furtively meeting her lover in a scene that mirrors the one in the park at the beginning of the movie. In many ways The Children Are Watching Us is quite similar to the later Umberto D., only here the lonely, misunderstood, and helpless main character is a small boy rather than an old man. The boy who plays Pricò, Luciano de Ambrosis, who was not even five years old when the film was made, is marvelous at expressing the sensitivity and sadness of his character, and his ability to cry on cue amazing. To call his performance moving would be a tremendous understatement. Heartbreaking would be more like it.

At the end, Pricò is confronted with his own difficult decision, one which he makes with greater maturity and less selfishness than the adults in the the film. Perhaps all that silent watchfulness taught him more than the unobservant adults ever suspected.

I couldn't help thinking of the recent Tilda Swinton movie I Am Love while I watched this film. Both involve the wife of a wealthy Milanese industrialist, trapped in a loveless marriage to a rather cold older man, who has an affair with a poor but younger, more sexual, and more vital man. But I Am Love, which consciously evoked Antonioni, couldn't stop drooling over the very goodies it seemed to be condemning as emblems of shallow materialism and even provided the heroine with a hopeful future with an earthy stud, an attempt to coat a simple story of adultery with a slick and oppressively elaborate veneer that for me gave the movie a distinct air of artifice. In contrast, Antonioni's Story of a Love Affair, his first fiction film after working for several years as a screenwriter and director of documentaries, seems completely genuine. 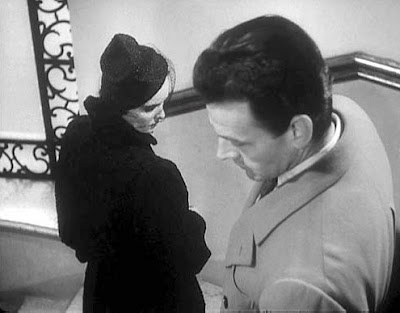 Compared to Antonioni's spare later films, Story of a Love Affair is positively packed with plot. Parts of it resemble film noir, while other parts are closer to romantic melodrama. In Milan, a wealthy businessman hires a firm of private detectives to investigate the past of his beautiful young wife, Paola (Lucia Bosé), whom he married without knowing anything about her and who has never revealed anything about her life before their marriage. He also suspects she is having an affair, so he wants her followed. Through the investigating detective, we learn that Paola's best friend was killed in a freak accident—a fall down an elevator shaft—just days before she was to be married and that Paola hastily moved to Milan right afterward.

We also learn that the dead friend's fiancé, Guido (Massimo Girotti), has recently shown up in Milan and that he is indeed having an affair with Paola. Further, it seems that the two were in love before and that even though they did not actually kill the friend, they were passively responsible in allowing the accident to happen. The feelings of guilt over her complicity in her friend's death drove Paola to flee to Milan and find refuge in an impetuous and loveless marriage to a wealthy older man. Now that Guido has returned to her life, she wants to be with him, but she doesn't want to give up the material comforts she has grown used to. So she hatches a plot with Guido to murder her husband so that she can have both her lover and her husband's money.

This may sound like the typical film noir material of movies like Double Indemnity and The Postman Always Rings Twice, but Antonioni puts his own stamp on the story, finding and developing elements that would become fundamental to his later work. He hasn't yet arrived at his fully evolved mature style, but the beginnings of it are unmistakable. I think of Antonioni as one of the most visual of all filmmakers, and you can see that tendency already at play here. In Story of a Love Affair are many examples both of his lingering static shots with their formalistic compositions and also of his fascination with architecture and the urban landscape, traits that were to become hallmarks of his films. Also in evidence is Antonioni's characteristic unwillingness to fragment the interaction of his characters into edited sequences, his preference being to follow them with the camera in precisely choreographed long takes—especially in confined interiors—a technique modern filmmakers might do well to study as an alternative to the overuse of the hand-held camera.

Most striking of all, though, is the gradual introduction into what starts as a genre film of themes that would later become preoccupations. The world Antonioni depicts in Story of a Love Affair is one in which people are eager to forget both their collective and their own personal pasts. Yet willingly cut off from the past, they seem adrift in the present, unable to move forward, only to spin around and around in endless circles without ever getting anywhere. Antonioni uses conventional noir tropes to explore his fascination with the twin vortices of the post-World War Two human condition: the alienation of his characters from their lives and the enervation that at the same time prevents them from doing anything to change their lives. And running as an undercurrent through the entire film is a sense of personal isolation that results from the profound inability of these people to connect. At times it's hard to believe this film was made sixty years ago, so fresh does it seem in its attitudes.
Labels: Italian Cinema, Michelangelo Antonioni, Vittorio de Sica