The postwar Italian neorealist school of cinema has to be one of the most influential movements in film history. Neorealism came about almost by accident when the Italian film industry resumed after Liberation and directors were forced by the lack of studio facilities and a dearth of trained actors to turn to real locations and nonprofessional actors. What began as an adjustment of subject and technique to practical necessity quickly became a full-blown aesthetic, as these filmmakers, most of whom had experience making documentary films, found inspiration in events of the war and the immediate postwar era and sought to break down—or at least create the illusion of breaking down—the distinction between fiction and nonfiction in movies.

Within ten years, though, neorealism in its original form no longer existed. Roberto Rossellini had moved on to more personal stories starring his wife, Ingrid Bergman, while Vittorio de Sica, with his more sentimental brand of neorealism, had progressed to projects of greater universality like Umberto D. Luchino Visconti's directing career followed a similar path. His first fiction film, Ossessione (1942), was based on James M. Cain's The Postman Always Rings Twice. This was a proto-neorealistic work that, in its use of actual locations and unglamorous, often untrained actors, looked ahead to the first truly neorealist film, Rossellini's Open City (1945), while approaching Cain's theme of doomed, obsessive love in a more conventional way, treating it with an eroticism and emotional pitch of near-melodramatic intensity. From the 1950s on, Visconti made films that departed ever further from neorealism, films with an increasing emphasis on ornate pictorial values and almost operatic emotions. (Visconti called the style of these later pictures neoromanticism.) But between Ossessione and his later, more sensuous and grandiose movies, Visconti made a film that is the purest expression of neorealism I've seen, La Terra Trema (1948). 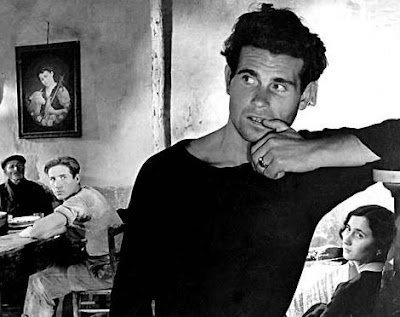 The film takes place in the small fishing village of Acitrezza in Sicily and deals with the fortunes and misfortunes of a family of fishermen, the Valastros. Returning to the village after war service on the mainland is the eldest son of the family, 'Ntoni. His father has recently been lost at sea, and the family now includes his grandfather, mother, three sisters, and younger brothers. The village fishermen all work for a syndicate of wholesalers who own the fishing boats, employ them, and buy their catch at rock-bottom prices fixed by the cartel. There is little hope that any of the fishermen will ever be able to break free of their economic dependence on the wholesalers. But 'Ntoni brings home with him new ideas that threaten to shake up life in his village, where little has changed in the last hundred years. He wants to buy his own fishing boat and go into business for himself, and to finance this scheme, he persuades his family to mortgage their house, their only asset. His hope is that when he succeeds, others in the village will follow his example and break the power of the wholesalers who control their lives. 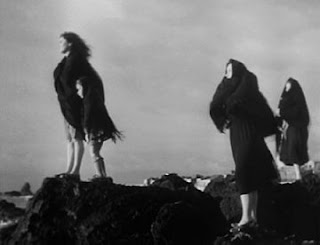 All seems to be going well until 'Ntoni and his brothers are lost at sea in a sudden storm. For several days his mother and sisters wait anxiously on the shore while a search party hunts for the missing men. Although they are eventually found and hauled back to shore, the boat is damaged beyond repair. 'Ntoni now finds himself without a boat, blacklisted by the cartel, and unable to pay the mortgage on the family's home. Evicted from their house, the Valastro family rapidly begins to fall apart as one by one, each member of the family suffers the dire effects of the failure of 'Ntoni's plans. Unemployed, 'Ntoni begins drinking and carousing with the village derelicts. Worst of all, the villagers and wholesalers accuse him of being responsible for destroying his family by his arrogance in defying tradition. He must face not only personal defeat and the ruin of his family, but also the destruction of his hopes to bring about a change in the fearful and hidebound attitudes of his fellow villagers.

It's not surprising that La Terra Trema was originally intended as a straight documentary on the lives of the fishermen of Acitrezza. It soon became a fictional picture, though, when Visconti decided to graft onto this original concept an adaptation of the novel I Malavoglia by Giovanni Verga, the rights to which he already owned, and to use the locations and villagers he had previously scouted out. The final film is imbued with a compelling sense of authenticity. This is due in part to the decision to film entirely on location, in the streets and houses of Acitrezza, in the harbor and in the boats of the fishermen, an approach not unlike that of other neorealist films of the time. Even more responsible for the film's sense of authenticity is Visconti's decision to use the villagers, none of whom had any formal training, as actors. Other neorealist directors successfully mixed trained and untrained actors—although I don't think anyone watching Open City, for example, would mistake Anna Magnani and Aldo Fabrizi for nonprofessionals—but Visconti chose to use no professional actors at all.

Visconti must have had tremendous rapport with the villagers who play the characters in La Terra Trema, for they avoid amateurishness just as surely as they avoid any hint of the calculation of trained actors. These people express simple, direct emotions in a convincingly realistic manner that seems completely unlike performance, and in doing so they have a powerful effect on the viewer. Our sympathy for the harshness of their lives seems wholly earned. They make us really feel for these people without making us suspect that we have been in any way unfairly manipulated. Visconti plays his own part in this by neither overemphasizing the emotions of his characters, as he sometimes did in other films, nor taking an aloof, clinical attitude.

Yet for all the realism of its setting and characters, La Terra Trema is a tremendously artful film, and the person responsible for that artistry is clearly Visconti. This is a movie whose cinematic technique is one of great simplicity. There is no fancy editing and no fancy camerawork. The camera hardly ever moves; in the picture's nearly two and a half hours I noticed exactly one traveling shot. The rest of the film consists of static camera placement, with the camera panning and tilting to follow the action during long takes. Much of this might have been dictated by the limitations of location shooting, but because this minimalist style seems entirely natural to the subject, it actually works in the film's favor, helping the film achieve a kind of grandeur in its simplicity.

Despite this technical simplicity, La Terra Trema contains images as dazzling as any in cinema. Visconti accomplishes this visual splendor through the beauty of the individual shots. He creates one stunningly composed and lighted shot after another, selecting and organizing everything in the frame—the rugged landscapes and seascapes, the earthy, subtly expressive faces of his actors, the groupings of characters—with the eye of a painter. Even a purely descriptive passage such as the one near the beginning of the movie documenting the way the villagers fish at night and return with their catch before dawn is filmed with ravishing beauty. 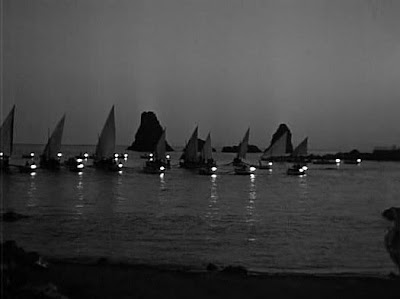 It's not surprising either that the original documentary film that became La Terra Trema was commissioned by the Italian Communist Party. Born into a wealthy Milanese family, Visconti joined the Communist Party during World War II and remained committed to its principles for the rest of his life. La Terra Trema has a plot of obvious appeal to a person of Visconti's political beliefs. It deals with an underclass of workers who are ruthlessly exploited, excluded from ownership of the means of production by being prevented from owning their own fishing boats, which would allow them to bypass the wholesalers and sell directly to the seafood distributors. Moreover, they are persuaded to accept their status by being brainwashed and intimidated into believing that class hierarchy is part of the natural order. These are the very things 'Ntoni wants to overcome.

Today, the political views expressed in La Terra Trema strike me as a very mild form of Marxism indeed, closer to modern entrepreneurial capitalism than to communism. But whatever an individual viewer's attitude toward the politics of the film, you don't have to be a Marxist to know that when the source of their power is corrupt, those in power will use all available means to crush opposition. Viewers of any political persuasion should be able to identify with 'Ntoni's resentment at his powerlessness and his desire for economic independence, and to feel the pain and humiliation of his failure to bring about change. Anyone watching La Terra Trema can take away the message that a small personal defeat with little impact on the world at large can in its own way be as moving as a big event that changes history. If the ultimate point of neorealism was that ordinary lives are just as interesting and as meaningful as great ones, then I can't think of a better film to illustrate that point than La Terra Trema.
Labels: Italian Cinema, Luchino Visconti