In the fun house how do you know who's really crazy?


Bob Rafelson's The King of Marvin Gardens is the last of seven films produced between 1968 and 1972 by BBS Films, the production company co-founded by Rafelson. These films include oddities like Rafelson's Monkees movie Head, works of historical importance like Easy Rider, and two bona fide masterpieces, Five Easy Pieces and The Last Picture Show. All seven BBS productions have now been released by Criterion in the collection America Lost and Found: The BBS Story. (Not included in the collection is an eighth BBS production, Hearts and Minds, the Oscar-winning 1974 documentary about the Vietnam War.) The King of Marvin Gardens was Rafelson's follow-up to Five Easy Pieces and, perhaps because that generously praised movie raised expectations so high, got a tepid critical reception when it was released. The film has its admirers, though. David Thomson, for example, calls it "Rafelson's most intriguing picture." Leonard Maltin calls it a "genuinely haunting, original drama." After seeing it recently for the first time, my own reaction is that those descriptions aren't inaccurate but that the film isn't wholly successful either and is something of a letdown in comparison to Five Easy Pieces. 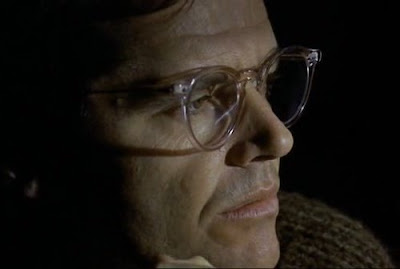 The King of Marvin Gardens stars Jack Nicholson as David Staebler, a Philadelphia late-night radio broadcaster whose show includes long narrative monologues. The movie opens with one of those monologues, although it isn't clear at first that David is in fact doing a radio show. All we see for the first five minutes of the movie is Nicholson's face in tight close-up as he speaks in a darkened room, sometimes looking at the camera, sometimes looking away from it. For all we know, he might be speaking directly to the viewer or even to a therapist. The story he tells is about himself and his older brother and how they silently conspired to let their grandfather choke to death on a fish bone rather than help him. As David tells his tale, it seems shockingly authentic.

As he concludes with the statement "At that moment my brother and I became accomplices forever," the spell is broken by David's sound engineer abruptly cutting him off with the message that he has an urgent telephone call . . . from his brother Jason, summoning him to Atlantic City. When David goes home to pack, we see that he actually lives with his grandfather and that what seemed to be an on-air confession was completely fictional. The only true thing in the tale was the psychological truth of that statement about the two brothers being accomplices forever. It is precisely the conspiratorial, mutually dependent relationship between David and Jason that drives the movie and sustains it through its frequent narrative doldrums.

When David arrives in Atlantic City, we meet the other main characters in the film, Jason (Bruce Dern), his girl friend Sally (Ellen Burstyn), and Sally's teenage stepdaughter Jessica (Julia Anne Robinson). Jason has sent for David because he wants to include him in what is potentially a hugely profitable real estate deal he is trying to close. He claims to be negotiating to buy a small island in Hawaii and develop it into a gambling resort with financing from Japanese investors and the Atlantic City hoodlums he has been working for. It soon becomes evident, however, that the real estate deal, in fact Jason's entire account of his life in Atlantic City, is no more than a wish-fulfillment fantasy. The rest of the movie deals with how David copes with his dawning realization that the real estate deal is a pipe dream and that his brother, incapable of acknowledging the truth about the situation, expects David to support him in his extravagant fancies.

What makes The King of Marvin Gardens worth watching is not its meandering narrative or its stylish but often gratuitous set pieces or even the film's impressive visuals, with their magnificent sense of composition, use of color, and eye for the faded luster of the pre-gambling Atlantic City in winter. The real attraction here is the satisfaction of seeing great actors inhabit interesting and thoughtfully conceived characters. Nicholson gives one of his most subtle, low-key, and introspective performances. There is none of the smart-alecky nihilism or leering histrionics we often associate with him in evidence here. His David Staebler is a rather passive man, a man who seems weighed down by the complexities of life and has withdrawn to the safety of a static existence that keeps the outside world at a distance. That he earns his living by sitting alone in a darkened radio studio playing music and telling fictional stories about himself to strangers with whom he has no direct contact tells us a lot about the insularity of his life. It is hardly surprising when we learn he has been hospitalized more than once for depression. 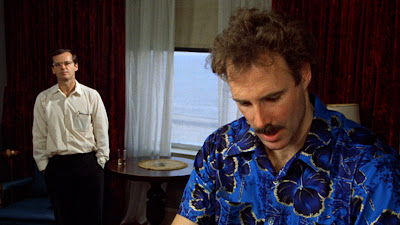 Jason Staebler, two years older than David, is in most ways the complete opposite of his brother. David lives in his mind, Jason in his body and emotions. David is a reserved person, Jason an expressive one. If David is almost too much in touch with reality to be totally comfortable with it, Jason projects his wishes and fantasies onto the world to such a degree that he borders on being delusional. If David shrinks into himself for self-protection, Jason expands to fill his world as though he believes he can shape reality simply by occupying it fully. David is dwarfed not only by Jason's burly physique but also by his grandiose personality—his ego, self-confidence, and ambition. With his wild hair, manic eyes, and impulsive movements, Dern makes a most convincing megalomaniac. He and Nicholson play off each other with expert precision, showing how these two characters feed off each other in their grown-up version of a childhood big brother-little brother symbiosis, with Jason the leader and David the follower. When Dern and Nicholson are onscreen together, they make it absolutely believable that these two characters would instinctively fall into a fraternal folie à deux in which each enables the other to escape the unpleasant realities and burdensome responsibilities of adulthood.

Yet as good as Nicholson and Dern are, for me it is Ellen Burstyn who gives the most compelling performance in the picture. Her Sally, described at one point as "a middle-aged kewpie doll," is a former beauty queen clinging to Jason's fantasies as a palliative against the mental terror that a woman defined by her youth and looks experiences as she approaches middle age. As she grooms her stepdaughter Jessica for competition on the beauty-queen circuit—their dream is that Jessica will one day return to Atlantic City and be crowned Miss America—she watches the teenager openly flirting with Jason, and Jason responding with obvious sexual interest. (Jessica also comes on to the self-contained David, who doesn't respond.) Burstyn has some of the best scenes in the movie, and she plumbs them for maximum effect. At one point she catalogues with bitter humor and resignation the subtle signs of the inevitable physical decline in a woman of her age. Another especially telling scene is one in which she impetuously chops off her hair in an act of symbolic self-mutilation, a rejection of her role in life as little more than a decorative physical presence. 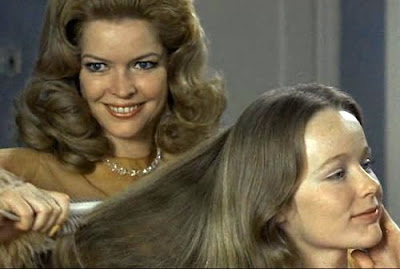 When Jason builds a bonfire on the beach and Sally, with her Joan of Arc martyr's haircut, joins him to throw in all of her possessions in anticipation of their departure for Hawaii, we realize she is jettisoning all hope for her present life and desperately putting her hopes for the future in Jason's hare-brained scheme, a last-ditch attempt to create a new identity for herself based on something more than her looks. Throughout the movie Burstyn skillfully limns each successive stage in Sally's slow downward emotional spiral, which ends in an explosive meltdown that propels her over the edge and into the role of agent of destruction. Burstyn is so good in those final scenes that she rises above the contrivance of the movie's rather arbitrary tragic ending. It's a mesmerizing performance which shows that Burstyn was one of the finest American screen actresses of the seventies.

The King of Marvin Gardens is a flawed movie, but one with enough strong points to make it worthwhile. If for no other reason, watch this film for its splendid visual sense and for the thrill of seeing these three actors at their peak, giving fascinating interpretations of lost souls living on the fringes of 1970s America, their lives unraveling before our eyes.
Labels: Bob Rafelson, Ellen Burstyn