12 The Films of Spencer Tracy and Katharine Hepburn, Part 4 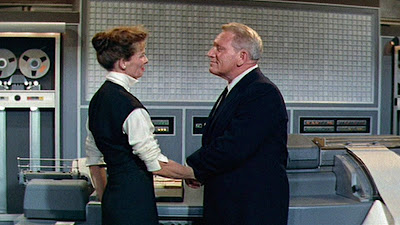 In Desk Set Katharine Hepburn plays Bunny Watson, head of the reference department at a national television network, an all-female department staffed by Hepburn and her three coworkers (Dina Merrill, Sue Randall, and a delightful Joan Blondell). When their territory is invaded by an absent-minded "methods engineer," Richard Sumner (Spencer Tracy), who shows up unannounced one day and begins measuring the office space, Bunny assumes Sumner is some sort of efficiency expert hired to reorganize the layout of the office. But nobody knows for sure what he is up to until twenty minutes or so into the film, when he drops a bombshell. He is actually a computer engineer whose job is to install a giant computer (or "electronic brain," in the jargon of 1957) to store all the information currently held in the department's archives of print sources. Bunny, who has an absolutely retentive memory for all sorts of minutiae organized according to her own idiosyncratic method, is intellectually offended by the prospect of being replaced by a machine. "I'd match my memory any day against any machine," she boasts. The other women in the office have a more practical concern: they can't afford to lose their livelihood.

As you might expect, romantic complications soon arise. For seven years Bunny has been dating an executive at the network, Mike Cutler (Gig Young), in the expectation that a proposal of marriage is forthcoming, but to no avail. After she and Richard are caught in a rainstorm, she invites him to her apartment, where they slip into bathrobes and enjoy a comfortable dinner (fried chicken prepared by Richard) while their clothes dry. When Mike shows up unexpectedly, he jumps to the wrong conclusion and leaves in a huff. Things reach the crisis point during the drunken office Christmas party when Mike finally proposes—but on the assumption that Bunny will give up her career and life in New York and follow him to his new job in California—and the entire office learns that the new computer is to be installed the next day. The rest of the movie explains how Bunny's romantic dilemma and the department's uncertain future are ultimately resolved. (Happily, of course, for this is a comedy.)

This was the first Tracy-Hepburn movie shot in color. It was also the first not made by MGM, but instead at 20th Century-Fox, by Fox house director Walter Lang. The British film critic and historian Leslie Halliwell calls him a "director of competent but seldom outstanding entertainments," and I would say that is a fair summation of this film. When the plot begins to drag, you can sit back and admire the elaborate production design and the chic wardrobes of Hepburn and her female costars. Or you can always direct your attention to the imaginative ways Fox house cinematographer Leon Shamroy applies the CinemaScope screen ratio typical of the studio's output in the 1950s to the intimacy of a romantic comedy. Especially interesting is the way he treats the reference department as a sort of stage (the movie was, in fact, based on a play), spreading the actors and props across the screen and using dollops of color to break up the monolithic shape of the frame.

Desk Set is a bit slow to get started, the exposition of its first section more functional than engaging. The situations and characters surrounding Tracy and Hepburn have the slightness of a sitcom, although a very smoothly engineered and not unintelligent sitcom. When the focus settles on Tracy and Hepburn, however, things immediately pick up. Their interactions are quite well written, especially the scenes in which they are the only two characters present, and form the core of the film's appeal. By the time Desk Set was made, these two were so comfortable with each other onscreen that they could have taken turns reading the telephone book and made us believe it was as witty as the dialogue in a play written by Oscar Wilde. There is no doubt that their personal charisma and their star power are the things above all else that put this movie over. 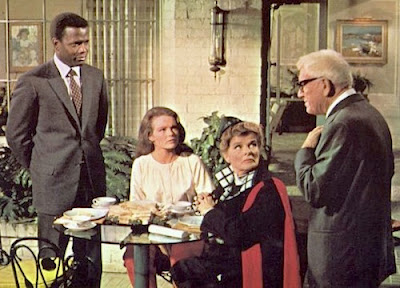 In Spencer Tracy and Katharine Hepburn's last film together—and Tracy's last film ever—they play a married San Francisco couple, Matt and Christina Drayton. He's the editor of a newspaper and she owns an art gallery. When their 23-year old daughter Joey (played by Hepburn's niece, Katharine Houghton) returns from a vacation and announces plans to marry after a whirlwind romance with a man she has known only a few days—a widower nearly fifteen years older than herself—her mother is alarmed. She is in for an even greater shock when she meets the man and finds he is black. He is Dr. John Prentice, a medical researcher played by Sidney Poitier. As political liberals, the Draytons claim to have no objection to the marriage on racial grounds. It's the reaction of society and the problems they believe their naive daughter will encounter as part of a mixed-race marriage that trouble them. Christina quickly comes to accept the idea but realizes that the greatest obstacle to the marriage will be her husband.

Prentice further complicates matters when he proclaims to Matt that he won't marry Joey without her father's approval, and moreover that since he will be leaving for Geneva the next day, Matt has twenty-four hours to make up his mind. An additional complication ensues when Prentice's parents suddenly announce they are flying up from Los Angeles and plan to come to dinner at the Draytons' home. As the film builds to its long climactic scene, the dinner party, the women have agreed to support the marriage, but sparks are still flying between the men—Matt, Dr. Prentice, and Dr. Prentice's querulous, disapproving father—and the question of Matt's final decision in the matter is still up in the air.

Director Stanley Kramer got his start in the late 1940s as a producer of social issues movies and, after becoming a director in the mid-1950s, directed a series of issues movies of his own. But by 1967 Kramer's once-daring liberalism was beginning to look ponderous and tired. His attempt to make a serious statement about the contemporary state of race relations in the U.S. in Guess Who's Coming to Dinner seems hopelessly dated and unrealistic, and I mean dated not just in today's terms, but in the context of its own time. In the year that Bonnie and Clyde, The Graduate, even In the Heat of the Night were released, the sensibility of Guess Who's Coming to Dinner seems just plain out-of-step with the times. And Kramer's direction of the film, with its obviously fake backdrops of San Francisco and long didactic conversations, is as outdated as his take on its subject.

The movie has two huge flaws that make its central conflict ring false. Reviewers of the time criticized Poitier's character as being such a paragon that it made the Draytons' agonizing over the engagement seem implausible. But I find his behavior quite passive-aggressive. The "choice" he offers Matt seems more an ultimatum. He says that knowing how much Joey loves her mother and father, he couldn't bear it if a marriage without their approval caused a rift between Joey and her parents. But what does he expect to happen if he refuses to marry Joey because her parents object? Can he honestly believe such an outcome would be likely to preserve good relations between parents and daughter? Another major problem with the picture is Matt's ambivalence about the marriage. He says he only wants to protect his daughter from the unhappiness of being shunned by society. But come on. Never mind that the Draytons live in San Francisco, the most liberal city in America. Just consider that Prentice is a world-famous expert on infectious diseases and a consultant to the World Health Organization. Not only does he mix with highly educated, cosmopolitan people for whom interracial couples would hardly be unheard of, but he could choose to work and live anywhere in the world, in cities and countries where such couples were accepted even in 1967. 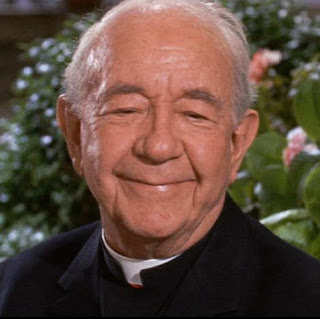 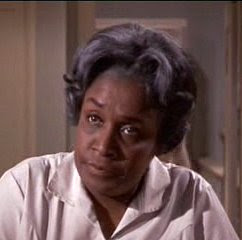 Then there is the strangely inconsistent tone of the film. William Rose's screenplay and Kramer's direction waver between treating the film's issues seriously and presenting them almost in sitcom trappings. Cecil Kellaway plays a friendly priest who serves as Matt's speaking conscience, urging him to greater tolerance. Kellaway starts out like a priest from a Leo McCarey picture of the 1940s, complete with Irish brogue and blarney-laden platitudes, then midway through the movie unaccountably loses both the brogue and the leprechaun personality. Isabel Sanford, as the Draytons' outspoken housekeeper haranguing Poitier for the brashness of his designs on Joey, whom she considers a surrogate daughter, comes off as a cross between Hattie McDaniel in Gone With the Wind and Thelma Ritter. Still, she steals every scene she's in. Then there's the cringe-inducing sequence where Kramer attempts to deal with the generation gap by contriving to send Christina and Matt to Mel's drive-in, where they have an unpleasant/humorous encounter with a carhop and a pair of middle-aged-looking youths in a jalopy who seem to have strayed in from an Andy Hardy movie. And this is supposed to be San Francisco in 1967, the year of the Summer of Love! 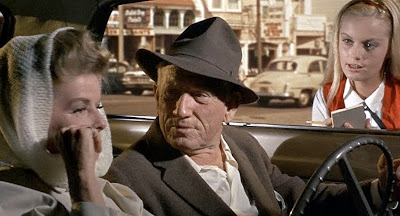 As a finale to the Tracy-Hepburn collaboration, this film seems in every way a mistake. Tracy might have had success earlier in the decade in movies directed by Stanley Kramer, but Kramer's preoccupation with weighty political and social questions and his obvious discomfort with comedy strike me as a terrible mismatch with Tracy and Hepburn, who were at their best in pictures that concentrated on the personal relationship between their characters and leavened any serious issues underlying the plot with airy comedy. There's just no way around the fact that Guess Who's Coming to Dinner is a disappointing end to one of the great acting partnerships of the movies.
Labels: Katharine Hepburn, Spencer Tracy, Stanley Kramer, Tracy and Hepburn, Walter Lang