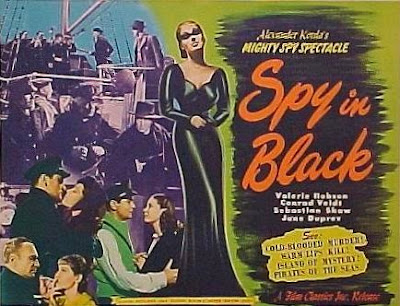 During the 1930s Michael Powell (1905-1990) directed more than twenty movies, most of them "quota quickies." These were hastily assembled films made to fulfill the requirements of the Cinematograph Films Act of 1927, which stipulated that a certain number of films shown in British theaters be British-made, a law created to protect the domestic film industry in the face of competition from the US and the Continent. For Powell the Act was a boon because it meant that an inexperienced but enthusiastic director like himself could gain a great deal of practical filmmaking experience, including how to finish a film on schedule and on budget, in a short amount of time. In 1935 alone he completed seven pictures.

The noted producer and director Alexander Korda—he had produced or directed prestige films like The Private Life of Henry VIII, Rembrandt, and The Scarlet Pimpernel—so admired Powell's 1937 film The Edge of the World, a sensitive account of a community in the Shetland Islands forced to relocate to the mainland, shot mostly on location, that he put Powell under contract. Powell's first project for Korda was another picture set in Scotland, The Spy in Black, a star vehicle intended for Korda's contract players Conrad Veidt and Valerie Hobson that was stalled for lack of a good script. Also on the film was a screenwriter working for Korda, Emeric Pressburger (like Korda a Hungarian émigré), whom Korda had called in to rescue the film by rewriting the screenplay. So impressed were Powell and Pressburger by each other's talent and so great was the rapport between the two men that they not only went on to work together on more than twenty additional movies, but in 1943 formed their own production company, The Archers, and from 1942 on signed their films jointly: "Written, Produced, and Directed by Michael Powell and Emeric Pressburger." 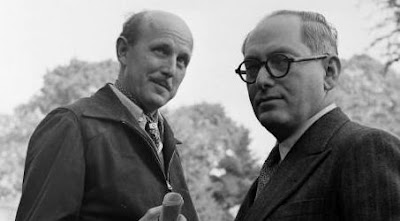 Michael Powell and Emeric Pressburger
The Spy in Black, their first collaboration, is an espionage thriller very much in the vein of Alfred Hitchcock's tremendously successful spy thrillers of the 1930s. The action takes place during World War One in the Orkney Islands of northern Scotland, where the British Grand Fleet, the main fleet of the British Navy, was based during the war. Conrad Veidt plays Captain Hardt, the commander of a German U-boat who is ordered to land on a remote island in the Orkneys and rendezvous with a German spy. Their mission is to find out when the fleet will be leaving the safety of the mined harbor and put out to sea. With this information German submarines can lie in wait, attack the entire fleet, and destroy the British Navy.

When Hardt arrives, riding a motorcycle to avoid suspicion, he finds that the German spy who will be helping him is a young woman (Valerie Hobson) masquerading as the island's new schoolmistress. Providing the vital information about the fleet's departure will be a disaffected, alcoholic British naval officer (Sebastian Shaw). Hardt immediately finds himself attracted to the beautiful young spy, who clearly is also attracted to him. But she insists that they keep their relationship strictly professional, going so far as to lock him in his room at the school house at night, ostensibly to keep the cleaning woman from blundering into the room in the morning. The tension between romance and duty seems to be the main focus of the film, for the plan appears to be going so well that there is little chance of anyone finding out about it. 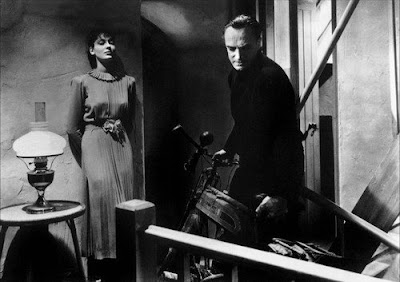 As might be expected in a work taking its cues from Hitchcock, the plot of the picture turns out to be far more labyrinthine than it at first appears. During the last part of the film, the pace of events rapidly escalates, culminating in an exciting chase on the high seas between Hardt, trying to escape on a hijacked passenger ferry with Hobson on board, and a pursuing British destroyer, a chase complete with moral conflict (the destroyer has orders to sink the ferry with its civilian passengers and crew) and sudden ironic reversals. Taking another cue from Hitchcock, Pressburger leavens the espionage plot with comic relief in the form of several bumbling, eccentric islanders.

In his 1986 autobiography, A Life in Movies, Powell acknowledged the film's modest nature, calling it "a little film . . . an expanded quota-quickie." Powell's characteristic commitment to quality and detail, however, pushed The Spy in Black beyond the limitations of the material and the scale of production he was working with. Knowing that the picture's budget precluded a second unit crew, Powell took three colleagues who had worked with him on The Edge of the World on a surreptitious three-day trip to the Orkneys. Even though the rest of the movie was made at Korda's studio in Denham, west of London, the footage they shot in the Orkneys, skillfully interpolated into the studio footage as establishing shots and matte shots, adds a real feeling of authenticity to the finished picture. Powell also pressed the film's young cinematographer to achieve atmospheric effects with lighting, with the placement and framing of actors within the decor, and with the use of close-ups—all in emulation of the style of German Expressionism. Most important, he used the film as a showcase for Conrad Veidt, an actor he clearly was in awe of—he calls him a "great actor" and "legendary personality"—but whose talent he felt had not been properly used in the pictures Veidt had made in Britain since leaving Germany in 1933. Powell emphasizes Veidt's imposing physique and facial features to bring out what he describes as Veidt's "overpowering" screen presence, making his character and his performance the centerpiece of the film. Veidt does a remarkable job with his ambiguous character, making a person we should look upon as an enemy in many ways sympathetic—intelligent, charming, and rather dashing.

If The Spy in Black falls short of Hitchcock's best films of this type, and if it doesn't reach the exalted heights Powell and Pressburger would later achieve with their masterpieces of the 1940s, it's still a good, entertaining genre movie. Although the picture is set during World War One, audiences of the time would surely have recognized its topical relevance, for by the time of the film's release in the UK in mid-August 1939, it was clear that military conflict with Germany was unavoidable. Indeed, less than a month later Britain and Germany were at war.

Next week I'll be writing on Contraband (1940), Powell and Pressburger's follow-up to The Spy in Black.
Labels: British Cinema, Michael Powell