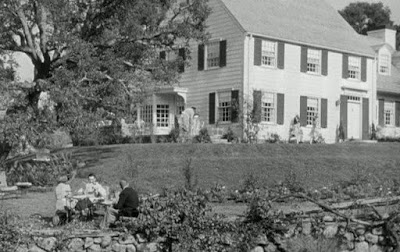 When I think of a Cary Grant movie, I tend to think of him playing someone unmarried, generally a sophisticate of some kind—a playboy, cat burglar, spy, or professional gambler. Whether he is being pursued or doing the pursuing, I think of Grant as becoming romantically involved during the movie with a beautiful woman—Ingrid Bergman, Grace Kelly, Deborah Kerr, Sophia Loren, Audrey Hepburn. If he does happen to be married (or divorced), I see him in a tempestuous relationship with someone like Irene Dunne, Katharine Hepburn, or Rosalind Russell. What I normally don't picture when I think of Cary Grant movies is Cary Grant living a settled middle-class family life with a wife, children, and unexciting job. Yet that is exactly the kind of man he plays in one of my favorite films of his, Mr. Blandings Builds His Dream House.

In this picture Grant plays a New York adman, Jim Blandings (even his name makes him sound ordinary), with a wife, Muriel (Myrna Loy), and two young daughters. Everything about the Blandings is conventional. They live in a New York City apartment, their daughters attend an expensive, progressive private school, they have a devoted longtime housekeeper and a pet canary. The only real problem they face is that they have outgrown their two-bedroom, one-bath apartment. This is conveyed in the opening minutes of the picture, as Grant gets out of bed at exactly 7:30 a.m. and begins his morning regimen. In one long take the camera follows Grant as he moves through the cramped apartment, down the narrow hallway, carefully maneuvering around furniture from one small room to the next. He finally ends up in the tiny bathroom, where, in a precisely timed physical comedy routine performed from the waist up, he attempts to shave while his wife attempts to perform her morning toilet at the same time . 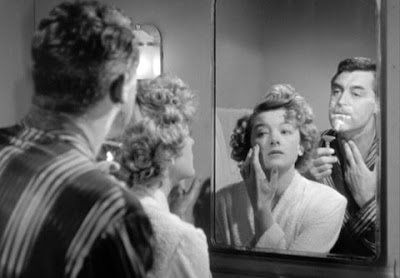 Muriel's solution to the uncomfortable living conditions is to knock out a wall and redecorate. Jim has a more radical solution—buy a Colonial farmhouse in Connecticut he has seen advertised in the newspaper, join the postwar exodus from the city, and become a commuter. When Muriel agrees to the plan, the Blandings think their space problem is solved. Little do they know that their real problems are just beginning. When the house they've bought turns out to be a wreck that is beyond repair, they reluctantly follow expert advice to have it demolished and start from scratch with a new house. The new solution to their problems, however, proves to be a Pandora's Box, as one complication leads to another in a cascading series of comic mishaps. As each of these crises is dealt with, another arises and expenses mount. "Anyone who builds a house today is crazy," Jim finally complains. "You start to build a house and wind up in the poorhouse." But by now it's too late to turn back, and when the Blandings family is suddenly evicted from their apartment, they must move into the new house before it is even finished.

Jim has other problems to deal with as well. At work he has been saddled with a problem account no one else has been able to cope with, a canned pork product called Wham. As the deadline for a new advertising slogan for the product approaches, he just can't come up with anything suitable. On the personal front, he must deal with family friend Bill Cole, an attorney whose constant presence advising the Blandings on the numerous legal ramifications of the project begins to arouse Jim's jealousy. You see, Muriel dated Bill in college and was once briefly engaged to him. That Bill has never married leads everyone (including the viewer) to suspect he is still carrying a torch for Muriel.

Like the W. C. Fields movies of the 1930s, this film is a study of comic frustration, the reactions of a man to situations and people—including his own family—that test his patience at every turn. But being Cary Grant, not W. C. Fields, Jim Blandings must keep up his cool demeanor and conceal his bewilderment at all times, whether dealing with his patronizing daughters, sweetly headstrong wife, difficult construction workers, or that elusive advertising slogan. Grant plumbs these situations for their maximum comedic effect and, using his finely calibrated sense of timing whether the comedy is physical or verbal, never lets us lose sight of the exasperation simmering just beneath his controlled surface.

He always seems to find just the right balance between expressiveness and restraint, the constant struggle to tamp down explosive emotions just before they manage to burst through. From the slow burn as his young daughter lectures him at the breakfast table on the advertising industry's callous exploitation of human gullibility, to the record number of trademark Cary Grant double-takes he delivers in the scene where he comes home after spending the night in the city, only to find that his one-time rival Bill Cole has spent the night in the house alone with Muriel—above all, he uses his facial expressions to convey the struggle between his inner frustration and his need to maintain composure. Seldom has the depiction of such a struggle—played with apparent seriousness—seemed so funny.

If Grant uses all his considerable expertise to suggest without openly showing, in all fairness it must be admitted that he is given an ideal context in which to showcase this ability. The excellent screenplay is by Melvin Frank and Norman Panama, a writing and later writing-directing team who were no strangers to comedy that blends subtle physical humor with witty verbal humor, working together on some thirty pictures, including several films for Bob Hope, Bing Crosby (both separately and together), and Danny Kaye. The plot, adapted from a 1946 novel, isn't exactly unfamiliar, resembling in many ways the very entertaining 1942 Jack Benny movie George Washington Slept Here, based on a play by Moss Hart and George S. Kaufman. But if a number of the situations are similar, the characters are distinct from Hart and Kaufman's, and the addition of elements such as the Blandings children moves the plot in new directions. And Cary Grant and Myrna Loy, with their obvious onscreen chemistry, strike me as a more convincing couple than grouchy, self-centered Jack Benny and gorgeous Ann Sheridan. 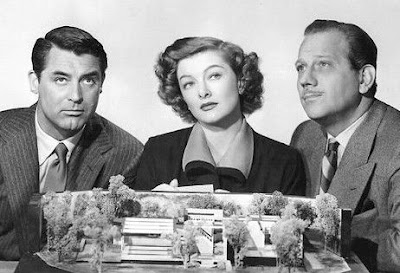 Kudos must also go to Grant's costars, Myrna Loy and Melvyn Douglas, who lend Grant expert support. At this point Loy, who had been one of the biggest box office stars of the late 1930s when she was at MGM, was just re-establishing her acting career after taking several years off during World War II to work for the Red Cross. Like most actresses in their early forties, she didn't have an easy time finding more mature characters to play. Onscreen, she had been a mother for several years, to Nick Junior in the Thin Man movies, but by the mid-1940s that series was winding down. In The Best Years of Our Lives (1946), playing the mother of a grown daughter, she showed what a fine dramatic actress she could be. But she was really at her best in light comedies like Mr. Blandings. No screen actress of the studio era was able to combine a surface manner of deadpan comic vagueness with underlying intelligence the way Loy did, a combination of qualities that comes through beautifully in the scene where she describes to the decorators the exact shade of color she wants each room in the new house to be painted.

An equally inspired casting decision was the choice of Melvyn Douglas to play Bill Cole. Like Loy, Douglas had been involved in the war effort for several years and when he returned to pictures after the war found it impossible to get the kind of parts he was accustomed to. In the 1930s Douglas was a sort of "poor man's" Cary Grant, often being cast as the same kind of sophisticated, urbane character Grant was associated with. In fact, Douglas got the best role of his early career, playing opposite Greta Garbo as an impoverished French count in Ernst Lubitsch's Ninotchka, only because Grant, Lubitsch's first choice for the part, turned it down, probably because he sensed that Garbo's was the dominant role. So casting Douglas as the college rival of Jim Blandings for Muriel's affection made perfect movie sense. For his part, Douglas seems content to play second fiddle to Cary Grant, never trying to upstage him, but finding his own niche in the proceedings by regarding Jim Blandings's befuddlement and misguided jealousy with amused detachment as he narrates the picture in voice-over.

Despite the departure of Cary Grant from his accustomed screen persona and despite the presence of old pros Myrna Loy and Melvyn Douglas, not to mention a number of scene-stealing character actors like Louise Beavers, Reginald Denny, and Harry Shannon, this is first and foremost a Cary Grant picture with Grant very much at the center of the movie. Cary Grant was really a far more versatile actor than he is usually given credit for. He may have made a very successful career of impersonating his own self-created screen persona, but if you look at a list of all the movies he made, it's clear that this screen persona was actually quite an adaptable one. It also seems clear that for a few years after World War II he made a real effort to stretch the boundaries of that persona in films like Notorious, The Bishop's Wife, People Will Talk, and this one before returning in the 1950s to roles that were a more comfortable fit with his debonair image. Grant's harassed family man in Mr. Blandings Builds His Dream House might not be as extreme a departure as some of the parts he essayed during this period, but in hewing closer to the familiar and still being in many ways unprecedented, it is one of his most delightful performances and among my very favorites of the thirty-five year long career of the man I consider the quintessential screen actor.

This post is part of the LAMB Acting School 101 on Cary Grant. For more on this event click here.
Labels: Cary Grant, Movie Houses