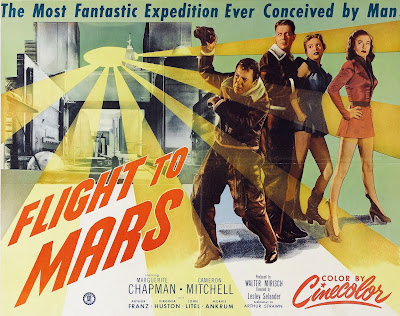 "Of course, academia collects masterpieces and is sometimes uneasy with silliness. . . . But real fans cherish bad movies, too, the frivolous spasms of light on the screen, the ones that led to reckless dreams."
—David Thomson

When I was six years old, I couldn't wait to get home from school each day and watch the latest installment of my favorite television show, a shoestring-budget serial called Rocky Jones, Space Ranger, shown on local after-school kids' TV. Clearly modeled on Buck Rogers, Rocky was an outer space law enforcer who cruised the galaxy in a rocket ship with his female first officer and ten-year old sidekick Bobby searching for villains and meddling in the affairs of inhabited planets. Whether battling the evil queen Cleolanta, rescuing the beautiful princess Juliandra from the machinations of her evil twin sister, or saving the heedless inhabitants of two planets on a collision course, Rocky and his crew could be relied on to triumph over villainy and save the day with their low-tech gizmos and their wits.

The program was my education in the distinction between reality and the movies. I experienced my first screen crush on the lovely Juliandra and learned that reading the credits at the end told me who she was in real life. Seeing her on another TV show playing a different character altogether and reading her name in the credits there really drove home the point that these were actors playing make-believe people, and after that I was always aware of the difference between the actor and the character. Probably the most educational result of the program, though, was when my father told me that we didn't really fly around the solar system in rocket ships, that (at this time) humans had never left Earth and the notion of space travel was wholly imaginary. I was crushed, but I did learn that just because you see it on the screen doesn't mean it really happens in life.

When I watched a DVD of the 1951 science fiction movie Flight to Mars recently, it immediately evoked the wonder felt by the six-year old armchair space traveler watching Rocky Jones. Such pleasure is almost beyond analysis and certainly beyond justification. It might be called guilty pleasure, although only an adult would think of the sensation in such a way. Briefly put, it's a movie-watching satisfaction that cannot be justified on aesthetic grounds, that in fact defies justification of any kind beyond the purely subjective. In this case—as in many similar cases, I suspect—the reaction surely is essentially one of nostalgia, a reaction in which memory completely blends with the present. For the adult it is the equivalent of revisiting that innocent, pre-rational childhood state of mind in which anything that gives mental or emotional pleasure is accepted without thought, on that level of pure sensation in which the thing itself is its own justification.

As its title indicates, Flight to Mars is about the first human expedition to Mars. One thing that makes this movie so enjoyable is that its plot is virtually a template for similar low-budget films of the 1950s about space travel to distant planets. The crew consists of four scientists—the team's leader, Dr. Jim Barker (Arthur Franz, who played the astronomer in Invaders from Mars), a professor, a medical doctor, the female member of the crew, Carol Stafford (Virginia Huston, probably best known for playing the "good girl" Robert Mitchum is engaged to in Out of the Past)—and one non-scientist, a cynical reporter along strictly as an observer, Steve Abbott (Cameron Mitchell). After surviving such perils as nearly being captured by the gravity of the Moon and dodging a sudden meteor shower, they crash land on Mars. 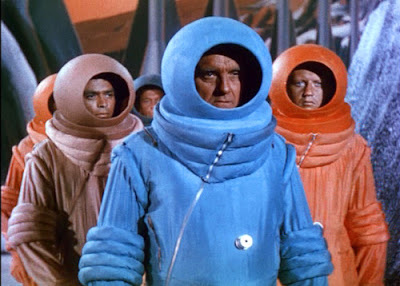 When the crew leaves the ship to survey the damage, they find architectural artifacts of a Martian civilization and then suddenly are greeted by Martians (led by Morris Ankrum, veteran of numerous 1950s sci-fi pictures) in colorful space suits. These Martians, who are human in every respect and even speak flawless English (they've been monitoring radio broadcasts from Earth), invite the travelers to enjoy Martian hospitality in their underground city—yet another iteration of Fritz Lang's Metropolis—while repairing the rocket ship. This is, of course, a scientifically advanced civilization whose inhabitants eat hydroponically grown and mechanically prepared food and lounge around in molded plastic chairs in starkly modernist dwellings.

Although the aliens seem civilized and friendly, we soon learn they have an agenda of their own. The element which powers their civilization, corium (could this be related to the synthetic stuff used to make kitchen countertops in the 1970s?), is running out. The Martians, needing a new home, have decided Earth fits the bill and never having developed space travel themselves, think the space ship that has landed on their planet is just the thing to take them to Earth to launch an invasion. Will the travelers learn the truth about the aliens' scheme from the brainy Martian Alita (Marguerite Chapman) who, with her slide rule and T-square, is helping Capt. Barker in his plans for the repairs while falling in love with him (don't even think about alien anatomy), and her father (veteran character actor Robert Barratt), a pacifist in favor of détente with the earthlings? If they do, will they be able to overcome fuel and weight restrictions and take Alita and her father with them as ambassadors of inter-planetary peace? 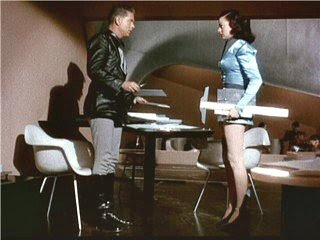 Despite its obviously minuscule resources—it was, after all, a Monogram Pictures production filmed, according to the actor Cameron Mitchell, in just five days—Flight to Mars is a striking looking movie, in many ways a triumph of imagination over budget. It was one of the first movies filmed in SuperCineColor, a three-strip color process derived from Cinecolor, a two-strip process devised in the thirties as a low-cost alternative to Technicolor and used mostly for cartoons. The garish, oddly bright colors in Flight to Mars complement the film's futuristic sets, not only adding visual appeal to the minimalist decor, but emphasizing their almost expressionist geometry and angularity and forming planes of color that lend a convincing impression of depth and space to the film's painted scenery. The curious demographics of the Martian population also give the filmmakers the opportunity to mask narrative implausibilities with eye-catching costumes. The Martian political leaders are ordinary-looking middle-aged men and their garb may be strictly functional, but all the females on the planet appear to be in their twenties—slim, leggy, gorgeous, and dressed in tight, vaguely uniform-like outfits with outlandishly architectonic shoulder pads, super short mini-skirts, and shoes that resemble a cross between high heels and calf-height boots.

The special effects of the rocket in flight are superior to those of an Ed Wood movie, but that's about the most that can be said of them. On the big screen they must have seemed especially unconvincing. The model used for the rocket ship, however, is splendid—sleek, metallic, and streamlined. It was originally designed for the 1950 film Destination Moon but wasn't used in that film. After appearing in slightly modified form in Flight to Mars, it would later be used in several other sci-fi movies of the 1950s.

Whether dealing with giant creatures, alien invasion, or space travel, science fiction movies were a major part of the American film industry of the 1950s. Mostly niche fodder for drive-ins and the lower half of double features, these films offered a more spectacular, fantastic, and often disturbing experience than the sedate television fare and the serious-minded social issues pictures of the time. Occasionally one of these films would hit artistic pay dirt. But for every Invasion of the Body Snatchers or The Day the Earth Stood Still, there were dozens of lesser films. The closest the space travel sub-genre came to greatness was probably Forbidden Planet, but as enjoyable as it was, everybody knew it was really Shakespeare in outer space. It wasn't until years later that this type of film got any real respect with Stanley Kubrick's 2001: A Space Odyssey. Yet if you were to ask me which I would rather experience tonight, Kubrick's technically dazzling but cold and austere vision of the future, or the more basic—and in comparison, definitely silly and frivolous—pleasures of Flight to Mars, I would pick the latter without hesitation. And I don't believe I would feel even a trace of guilt over my choice.

This post is part of the Guilty Pleasures Movie Blogathon sponsored by the Classic Movie Blog Association. For more on the blogathon click here. The quotation by David Thomson is from "When Is a Movie Great?" Harper's July 2011: 35-39.
Labels: Guilty Pleasures, Science Fiction