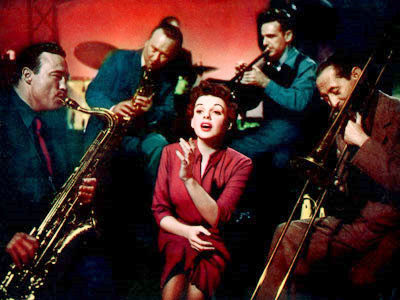 Note: This is a revision of the post I originally published, "Five Songs That Should Have Won the Oscar . . . But Didn't." I've expanded it and added two more songs to the original five, based on feedback I've gotten on the first version.

From the 1930s through the 1960s, movies were one of the main sources of songs that made the Hit Parade and eventually became standards. These songs were written by some of the greatest popular composers of the time, people like Irving Berlin, Jerome Kern, Harold Arlen, and the Gershwins. In the awards year 1934 the Academy began giving an Oscar for Best Song. For the first few years there were three nominees. Later the number of nominees varied from year to year, going as high as fourteen in 1945. The nominee had to be first heard in the movie, which meant that many well-known songs that had been previously recorded or used in stage musicals weren't eligible, although this rule was sometimes gotten around by having a new song written for the film version of a stage musical, for example, the 1935 nominee "Lovely to Look At," written for the movie version of Roberta.

As with other categories, when I look back at the winners and losers, it's sometimes difficult to understand the reasons behind the Academy's choices. How did songs which have become standards and been recorded again and again lose to cute songs which, while admittedly popular in their day, were works whose greatest appeal lay in their novel lyrics or catchy but essentially shallow melodies? Songs whose appeal was destined to fade with time, that today are seldom heard except in their original versions on nostalgia radio stations or cable music channels, or in kitschy Mantovaniesque arrangements on Muzak. In this post I'd like to present seven instances of songs that to me are great popular works of lasting appeal, but which lost to songs that strike me as clearly less Oscar-worthy.

• 1935
"Cheek to Cheek" from Top Hat—Music and Lyrics by Irving Berlin lost to:
"Lullaby of Broadway" from Gold Diggers of 1935—Music by Harry Warren; Lyrics by Al Dubin

Irving Berlin's love songs could tend towards the schmaltzy, but this one certainly doesn't. It's a gauzy, light-as-air confection whose well-known opening words signal its dreamy mood: "Heaven . . . I'm in Heaven."

• 1937
"They Can't Take That Away from Me" from Shall We Dance—Music by George Gershwin; Lyrics by Ira Gershwin lost to:
"Sweet Leilani" from Waikiki Wedding—Music and Lyrics by Harry Owens

Shall We Dance has my favorite set of songs of all the movies Fred Astaire and Ginger Rogers made together. It has such great songs as "Let's Call the Whole Thing Off," "They All Laughed," and this Oscar nominee, a wistful look back at a romance that's over, all built around the lingering memories of the beloved's mannerisms.

It's been said that of all the Tin Pan Alley composers, Harold Arlen had the greatest sympathy with African American music, and I would say the same applies to many of the song lyrics of Johnny Mercer. You can certainly hear that in this song, with its archetypically bluesy melody and almost jaunty take on the "you can't trust the opposite sex" idea. It might just be the anthem of The War of the Sexes. I've heard it sung just as persuasively by women about men as by men about women.

The analogy of being in love to being under a magic spell was hardly original, but few songs have captured the helpless exhilaration of that feeling, the "elevator ride" up and down the scale of emotions, as vividly or as bouncily as this one.

• 1944
"Long Ago and Far Away" from Cover Girl—Music by Jerome Kern; Lyrics by Ira Gershwin lost to:
"Swinging on a Star" from Going My Way—Music by James Van Heusen; Lyrics by Johnny Burke

Nobody surpassed Jerome Kern at writing simple, gorgeous melodies. This is one of his best, a song that movingly conveys in words and music both the sadness of the memory of love won and lost long ago and the quiet joy of rediscovering it.

Judy Garland said that Harold Arlen was her favorite composer, and for her comeback in A Star Is Born he came up with a smashing song that became one of her signature tunes, along with the 1939 Oscar winner "Over the Rainbow," also by Arlen, and the 1944 nominee "The Trolley Song." Here Arlen and lyricist Ira Gershwin created a dramatic, bluesy torch song about a woman whose love affair seems destined to end in sorrow, but who just can't let go of the memory of the man who deserted her.

• 1967
"The Look of Love" from Casino Royale—Music by Burt Bacharach; Lyrics by Hal David lost to:
"Talk to the Animals" from Dr. Dolittle—Music and Lyrics by Leslie Bricusse

Has there ever been a love song that expressed romantic longing with such gentle passion as "The Look of Love"? Burt Bacharach could write some truly bland melodies, but this one just wafts into your head and floats there. It's intense and delicate at the same time and completely hypnotic, no more so than when sung so exquisitely by the great Dusty Springfield.


I thought you might enjoy this outtake of Judy Garland performing "The Man That Got Away," one that was unknown to me until recently. I believe the vocal track is the same as the one in the take used in the final version of the film. This take doesn't have the smoky, after-hours atmosphere or the more stylized staging of that one, but it has its own charm. The brighter lighting shows Judy looking slim and well rested, and the soft rose pink color of her blouse gives her a healthy glow.