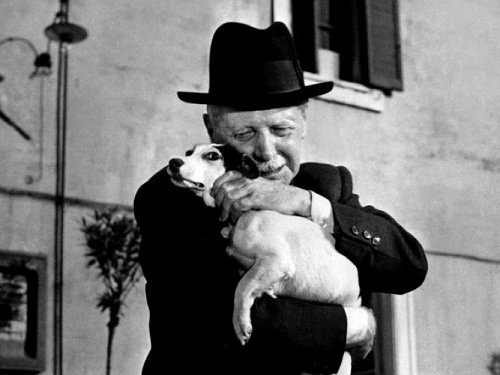 A great film about what it is like to stand by and watch helplessly as you slip into poverty and even your dignity becomes excess baggage.
—Martin Scorsese on Umberto D.

In the 1940s Vittorio de Sica directed a string of movies that were both popular and critical successes, movies that helped focus the world's attention on Italian cinema and the emergent postwar film movement of neorealism. These films centered on children and told stories largely from their point of view—pictures like The Children Are Watching Us (1944), Shoeshine (1946), and The Bicycle Thieves (1948). In 1951 de Sica turned his attention in a different direction, to a bleak story about an impoverished elderly man and his dog. The picture, Umberto D., was De Sica's first box-office flop in Italy, and its failure prompted him to turn away for nearly a decade from the serious subjects and realistic presentation of the hugely influential school of filmmaking he helped pioneer. Today Umberto D. is generally considered one of his two greatest works, along with The Bicycle Thieves. De Sica himself cited it as his own personal favorite of his films.

Umberto D. opens with a scene that might have come directly from a modern newscast. Down a street in Rome a large group of people march toward the camera, waving placards and chanting slogans. As they approach, we see that these are not ordinary street protesters but dignified elderly men dressed in overcoats, hats, suits and ties. They are retirees who, seeing their fixed incomes eaten up by inflation, are shouting "Justice for pensioners" and pressing for a raise in their pensions. Near the front of the demonstration is an elderly man accompanied by a small dog. The man is Umberto Domenico Ferrari, a retired civil servant, and the dog is his Jack Russell-like mongrel, Flike. When the police arrive and break up the demonstration, Umberto and Flike scurry away. "I'm just a good-for-nothing old man," he says to another pensioner, explaining that he is in debt, has no relatives to help him, is plagued by a persistent cough and fever, and is about to be evicted from his room because he is a month behind in his rent. 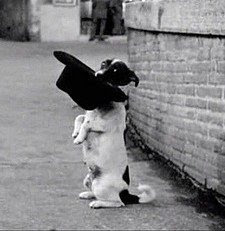 The film is Umberto's story, and he is in every scene, everything shown from his point of view. The plot of the movie is quite simple, a series of small everyday events that little by little give us a complete picture of Umberto's life in all its abject humiliation and hopelessness. Umberto responds to his dire circumstances with a series of increasingly desperate actions. He sells his possessions, beginning with his gold watch and his books. He tries begging in the street but cannot bring himself to carry through with it. Instead he has Flike sit up and beg with a hat in his mouth while he hides behind a nearby building. When an old acquaintance recognizes the dog, Umberto runs up and tells him that Flike is only playing. He even contrives to have himself admitted to the hospital so that he can save the money he would ordinarily spend on food to apply toward his back rent.

After Umberto is released from the hospital, his situation begins to go seriously downhill. He returns home to find that his landlady is redecorating the apartment in an absurdly frou-frou style, the wallpaper half stripped from the walls of his room, a huge hole knocked in the wall between his room and the next one. Umberto's world seems to be literally crumbling around him. Worst of all, Flike is missing. Rushing to the animal shelter to look for his dog, he is horrified by the casual indifference to the fate of the animals there and barely manages to rescue Flike before he is euthanized. Returning to his room late that night, he finds himself standing at his window looking into the deserted street below, and we can tell from the numb expression on his face and a quick zoom to the pavement below that he is about to jump. It is only when he turns around and sees Flike sitting on the bed waiting for him that he abandons his suicidal thoughts, at least for the moment.

In Umberto D. de Sica, like Chaplin in his films, presents the world as a place populated by victimizers and the victimized. When people are not outright malicious like Umberto's callous, social-climbing landlady, they are indifferent to the suffering of others. Just about the only other person in the film who elicits a sympathetic reaction is Maria, the meek, kind-hearted teenage maid in the apartment where Umberto lives. When Umberto packs his belongings and sneaks out in the middle of the night, he unexpectedly encounters Maria on the staircase and says goodbye to her. The dejected expression on his face makes it clear that he has given up all hope and decided to kill himself and that Maria—like himself another of life's sad victims and the only person in the film to show him any affection—is the one person he will be genuinely sorry to leave behind. 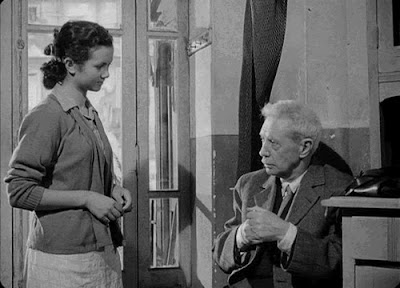 Much of the second half of the film is occupied with Umberto's futile attempts to make some sort of provision for Flike's future. No matter what he tries, though, nothing seems to work out. Apparently convinced that he and his dog are destined to stay together until the end, he finally takes Flike in his arms and walks around the barrier at a train crossing and toward an oncoming train. When the terrified dog leaps from his arms and runs away, cringing behind a tree, this rejection is too much for Umberto and he pursues Flike, wheedling him until he comes back. De Sica might portray Umberto's world as an inhumane place, but in the end he declines to treat his viewers with such cruelty. If we can't be certain what the future holds for Umberto and Flike, we now know that for them there will at least be some kind of future. In a final scene reminiscent of the one in Chaplin's Modern Times, we last see the old man and his dog walking away from us down a path in the park, playing fetch with a pine cone.
This ambiguous ending might seem a timid one, the result of a reluctance by de Sica to follow through on the grim situation he has set up so relentlessly, but I think closer examination tells us it is not entirely arbitrary. If Umberto's pride has been the thing that has kept him going this long, the inflexibility and selfishness it has engendered have also been his greatest flaws. Perhaps his concern for Flike manages to chip away enough of that stubborn pride to make him more adaptable and less self-involved. After all, his resources may be limited, but he does have resources. And it's a psychological truism that nothing can take us out of ourselves and help us transcend self-pity like loving someone else more than we love ourselves. Maybe in the end, rather than Umberto saving Flike, the truth is the reverse, and it is Flike who saves Umberto.

There is no doubt that of all the neorealist filmmakers, de Sica had the strongest streak of sentimentality, and my description of Umberto D. might make it sound quite the tearjerker. But de Sica didn't see the film that way, maintaining that rather than being sentimental, it was a realistic film made "without compromise." I think he was being absolutely honest when he said this, because even though the subject of the picture might break your heart, de Sica does present it in a totally realistic, unmanipulative way. This is a technically simple film with no fancy camera work and only one brief instance of showy editing, when the train is bearing down on Umberto and Flike and de Sica uses some rapid cutting and the shrill sound of the train whistle for heightened effect. Otherwise he makes no overt attempt to pull the viewer's emotional strings either through technical means or through overemphasis, recognizing the powerful emotional force of the story and standing aside to let it do its work.

Still, there's no denying that Umberto D. is a litmus test of any viewer's susceptibility to sentiment in film: if this movie doesn't melt your heart, none ever will. It's the kind of movie which contains scenes, situations, and images—and inspires emotional responses—that you will never forget. And it contains two of the greatest performances ever committed to film. One by seventy-two year old Carlo Battisti, a retired professor from Florence who made exactly one movie in his life, as Umberto. The other by a mongrel named Napoleone as his devoted canine friend Flike.