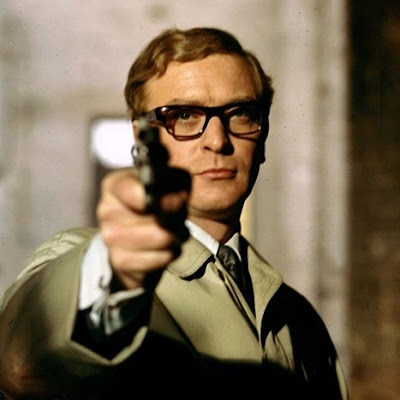 The success of the first James Bond films in the early 1960s spurred the creation of what amounted to a new genre—the Cold War spy movie. Within a couple of years the characters of Ian Fleming were joined on the screen by those of Fleming's fellow British writers of spy thrillers John le Carré and Len Deighton. The first film based on a novel by le Carré, The Spy Who Came In from the Cold, and the first film based on a novel by Deighton, The Ipcress File, were both released in 1965. Like the earliest Bond films, before the spoofiness and gimmickry began to predominate, The Ipcress File treats its subject seriously but with hints of insouciance. Like the films based on le Carré's novels, it deals with the inner workings of a British spy agency and with questions of loyalty and treason within that agency, but in a more straightforward and less convoluted way than le Carré typically did.

The Ipcress File opens with espionage agent Harry Palmer (Michael Caine) being transferred to a new unit in the Ministry of Defence and assigned to a new case. For some time, an unusual number of research scientists working for the MOD have been resigning, saying that they are no longer mentally up to the work. A break in the case occurs when a prominent scientist is kidnapped right after boarding a train and held for ransom to the highest bidder. The MOD successfully ransoms the scientist, but shortly after his return he suffers a breakdown in the middle of a lecture and must also resign. Now that the government knows the reason behind the sudden "brain drain" of researchers, Harry's unit is assigned the task of finding out exactly what has been happening to these men to cause such a traumatic reaction. The only clues are an abandoned warehouse where the spy agency believes the kidnapped scientist was held and a fragment of magnetic recording tape with the word IPCRESS on it.

For Harry there is another, even more important mystery besides the question of what is being done to the scientists and by whom. In the belief that someone in the agency is giving the kidnappers inside information, Harry determines to find out who is the mole. No longer able to trust anyone in the agency—neither his colleagues nor his superiors—he must pursue the investigation on his own. The film culminates in a mind-bending sequence in which Harry is kidnapped himself and subjected to the same process of psychological torture and Manchurian Candidate-style brainwashing the scientists have undergone.

With its classic suspense plot—in many ways the film resembles a Cold War update of the kind of spy thriller Alfred Hitchcock made in the 1930s and 1940s—The Ipcress File is a tremendously entertaining and exciting picture. While the business-like direction by Sidney J. Furie, the spooky music of John Barry, and the subdued production design of Ken Adam (he did the eye-catching production design of the early Bond films as well as Dr. Strangelove and Barry Lyndon) are instrumental in creating these effects, it's the cinematography of Otto Heller that really stands out. His frequent placement of the camera either very high or very low in relation to the people in the shot, combined with the use of raked camera angles, echoes Harry's conviction that something at the agency is askew and that nothing—and nobody—can be accepted at face value. Heller makes the CinemaScope screen shape seem almost naturalistic, especially in interior shots, often using frames within frames to break the screen into smaller units and add depth to what can otherwise seem a vast, flat horizontal expanse.

What really distinguishes The Ipcress File from the many films of this type that came after the first wave of James Bond movies, though, is the character of Harry Palmer and the man who plays him, Michael Caine. Harry is described at one point as having a reputation within his agency for being "insubordinate, insolent, a trickster—perhaps with criminal tendencies." That seems an apt description of this man who originally was forced into the military intelligence service to avoid a sentence in a military prison and is being coerced into remaining in intelligence by the threat of having to serve that sentence if he ever has thoughts of retiring.

Even before his suspicions about the existence in the agency of a traitor are aroused, Harry is a loner who despises bureaucratic minutiae and prefers to work solo, and that is exactly how he makes the significant breaks in the case that his colleagues are unable to do. In a field where teamwork is the norm, it's an unorthodox method that not only helps him make headway on a case that has everyone else mystified, but makes him the target of villains who would prefer that it remain unsolved. Harry is also a smart aleck, a womanizer, and a bit of a Cockney intellectual, with his love of books, classical music, and gourmet cookery. The film is nearly as much about him as it is about the case he's working on, and The Ipcress File concentrates on him far more so than the two Harry Palmer films which followed.

Before making The Ipcress File, Michael Caine had been working in pictures and in British television for nearly ten years, playing uncredited roles, bit parts, and finally in 1964 a major supporting role in Zulu. Harry Palmer was his first starring role, a part he got after Christopher Plummer and Richard Harris both passed on it. So well does he fit the character, though, that it's hard to imagine anyone else as Harry Palmer. Alfie (1966) is often considered Caine's breakout performance, but I would argue that Harry Palmer in The Ipcress File, coming a year earlier and earning him his first BAFTA nomination for best actor, is the true breakout performance.

It's also one of three performances that mark the high points of Michael Caine's early career and that define what is thought of as the early Michael Caine screen persona, the other two being Alfie and his Jack Carter in Get Carter (1971). Of the three, Harry Palmer just may be the most impressive. Alfie and Jack Carter are dominated by one quality, Alfie by his caddish exploitation of women and Jack Carter by his revenge obsession. Only slightly less intense a character than Alfie or Carter, Harry Palmer gives Caine the opportunity to play someone with multiple sides to his personality, and Caine does this without ever losing the center of the character or giving the appearance of straining to show off his versatility.

It's an accomplished, relaxed, highly confident job of acting that elevates an already very good film into an even better one. The fall of the USSR and the emergence of the War on Terrorism may have put an end to the Cold War spy movie, but the films of this type made in the 1960s can still entertain and thrill, and The Ipcress File is right up there with the best of them.
Labels: British Cinema, Michael Caine