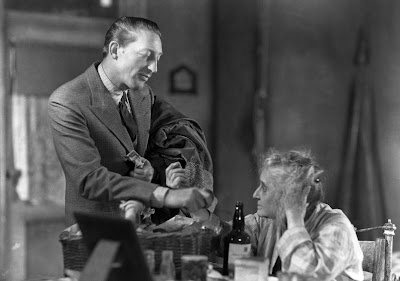 It Happened One Night (1934) is often considered director Frank Capra's breakout film. Yet it could be argued that Lady for a Day, made one year earlier, was Capra's true breakout film for several reasons. As the picture that earned Capra the first of his six Oscar nominations as best director, it put him on the map as one of Hollywood's major filmmakers even before It Happened One Night. The movie also made Capra the top director at Columbia Pictures. Because his films were such reliable money-makers, Capra was already one of the favored directors of Columbia's boss, Harry Cohn. But the unusually strong box office performance of Lady for a Day, combined with the fact that it was the first Columbia film to be nominated for the Academy Award for best picture, thus giving the Poverty Row studio a huge boost in prestige, further enhanced Capra's standing with Cohn. Lady for a Day also determined the future direction of Capra's career. Even though he got his start as a comedy writer for Hal Roach and Mack Sennett, most of the more than twenty features he had directed were dramatic pictures. It was this film that solidified Capra's reputation as a comedy director, and after Lady for a Day he worked almost exclusively in comedy.

In the opening moments of Lady for a Day, you can tell you're in Depression-era Frank Capra territory. As crowds of prosperous-looking people stroll down a big-city street, they mingle with the dispossessed—a legless man selling pencils, a blind beggar playing an accordion, a shabby elderly woman selling flowers, an even shabbier and more dishevelled elderly woman selling apples. The apple seller is Apple Annie (May Robson), an impoverished alcoholic with a secret. Her illegitimate daughter Louise (Jean Parker) has been living since childhood in a convent in Spain, and for years Annie has been successfully deceiving her into believing her mother is a rich New York City society matron.

Annie's world is about to come crashing down, because she has just received a letter from her daughter saying that she is on her way to New York with her Spanish fiancé and his father, a nobleman who wants to meet Louise's family to make sure they are of suitable social background before he approves the marriage. The desperate Annie has one hope, though, a dapper gangster called Dave the Dude (Warren William) who believes that Annie is his personal good luck mascot. Out of a combination of self-interest and genuine affection, Dave hatches an elaborate plan whereby he and his cronies will help Annie impersonate the genteel society matron she has pretended to be until the marriage has been approved and Louise is safely on her way back to Europe. When multiple complications arise, however, the success of Dave's scheme begins to look decidedly uncertain.

Lady for a Day was the fourth of ten pictures Frank Capra worked on with screenwriter Robert Riskin and the first comedy Riskin wrote for Capra for which he received sole screenwriting credit. Capra is often associated with screwball comedy, but I think of the typical Capra comedy of the 1930s less as screwball comedy than as comedy with a social conscience. It Happened One Night certainly has elements of this, and Capra's films like Mr. Deeds Goes to Town, You Can't Take It with You, Mr. Smith Goes to Washington, and Meet John Doe—all but Mr. Smith written by Riskin—take the idea even further. These are the movies people usually think of when they think of a Frank Capra film of the 1930s, and in all the important ways Lady for a Day was the first of these. Like those later films, Lady for a Day deals with social and economic warfare between the rich and the poor and perhaps more significantly, between unconventional individualists and stuffed shirts. As in those later pictures, it's also clear in Lady for a Day where the sympathies of Capra, the great populist, lie as he skewers the privileged, the pompous, and the narrow-minded.

Yet there is an essential difference between this film and the later social comedies: here social issues are used as a means to comedy, not as the point of that comedy. The same is true to a certain extent of It Happened One Night. In a way the success of that film—its clean sweep of the Oscars including one for Capra's direction, its success as one of the top money-making films of its year, its huge influence on screen comedy—inflated Capra's ambitions as a filmmaker. Entertaining his viewers was no longer enough; he wanted to educate them as well. As Alistair Cooke put it, after It Happened One Night Capra began "to make movies about themes and not people." This quality in the later Capra-Riskin films has always kept me from enjoying them unconditionally.

Thankfully, in Lady for a Day Capra doesn't attempt to combine comedy with sermonizing but is content to detach himself from the foibles of his characters the way Preston Sturges did. He's able to observe human weakness without condemning it. His characters aren't purely good or purely evil. His likable social outsiders all have dubious qualities; his unlikable social insiders eventually reveal qualities of character that are in some way admirable. The world of Lady for a Day is not yet the black-and-white world found in Capra's films from Mr. Deed Goes to Town onward, and for me that only makes the film all the more enjoyable.

Based on a story by Damon Runyon, Lady for a Day abounds in colorful characters, and one of its great pleasures is the way the actors inhabit these eccentric characters with so much personality. Because Columbia was a Poverty Row studio, much of the cast had to be borrowed from other studios. When Capra's first choice to play Apple Annie, Marie Dressler, wasn't available because she was still filming Dinner at Eight, Capra turned to another MGM player, the 75-year old Australian actress May Robson. She is just sensational as she runs the gamut of her character's various personas, from brash, streetwise sidewalk peddler to suicidal drunk frantic with anxiety to doting mother to refined society matron. Robson is so good that she was one of three nominees for the best actress Oscar. (The winner was Katharine Hepburn for Morning Glory.) Warren William doesn't seem quite so comfortable in his role. He's better at conveying Dave's slick fashion sense and his menace—he is, after all, a gangster—than he is at conveying Dave's uneducated, lower-class origins. 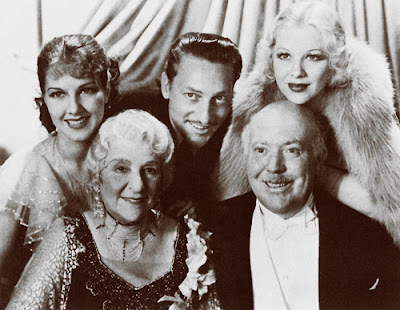 The supporting cast is one of those ensembles of character actors that make so many of the films of the 1930s so enjoyable. Glenda Farrell is Missouri Martin, Dave's slangy but savvy night-club singer mistress. The first glimpse of her, suggestively performing a song called "I Want a Man" in her night club act, will almost certainly have you thinking of Mae West. Guy Kibbee is the slightly bombastic, down-on-his-luck pool shark Judge Henry G. Blake, recruited by Dave to be Annie's temporary husband. Portly Walter Connolly (Claudette Colbert's father in It Happened One Night) is the insistent father of Louise's fiancé. Lunky Nat Pendleton plays one of Dave's criminal cronies, a dim-witted character called Shakespeare who masquerades as Annie's chauffeur. Best of all is bilious, stone-faced Ned Sparks as Dave's chief henchman, representing himself to the visitors as Dave's personal secretary. He gets off one of the best lines in the movie when he expresses his frustration at the folly of Dave's elaborate charade to pass off Annie as a society matron: "I'm going over to the insane asylum and hobnob with some sensible people."

To my mind Lady for a Day has worn better than some of Capra's more famous movies. While the film is well aware of the economic and social inequities of the time, it doesn't try to overlay this with a lesson in civics, ethics, or tolerance. The unpleasant realities of the Depression might give it extra realism, but this one is above all for entertainment.

Lady for a Day plays on Turner Classic Movies on Thursday, August 30, as part of TCM's Summer Under the Stars salute to Warren William. Check local listings for times. It was released in Blu-ray and a new DVD version by Inception Media in March 2012. This post is part of the TCM Summer Under the Stars Blogathon. For details check the sites of co-hosts Sittin' on a Backyard Fence and ScribeHard on Film, or visit the blogathon's Facebook page.
Labels: Frank Capra