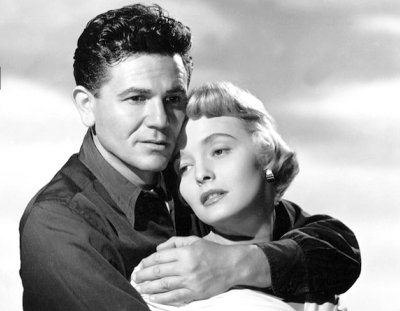 "His screen career was noir-ish from the word go," Andrew Sarris writes of John Garfield and the doomed character he played in his first movie, Four Daughters, made in 1938 for Warner Bros. and directed by Michael Curtiz. Garfield plays a bitter and alienated young musician who commits suicide to save the naive girl who marries him from ruining her life, and some have cited his downbeat character as the first antihero in American film. Before leaving Warners seven years later, Garfield was cast in many roles similar to the one he played in Four Daughters. These were forerunners of the disaffected youths of films of the 1950s, misunderstood and unhappy young men controlled by outside forces, young men whose outwardly antisocial impulses seemed perpetually at war with their inner sensitivity. If for Garfield these roles were initially the result of typecasting and studio efforts to build a screen image, they nevertheless tapped something essential in his screen persona—a mixture of toughness and vulnerability—and the image of the angry and misunderstood young man stuck.

By the time Garfield's contract with Warner Bros. expired in 1946, his career was at its height. Right after leaving the studio, he co-founded a production company, Enterprise Productions, with the expectation of having greater artistic control over his career. He did make two films for Enterprise, the boxing picture Body and Soul (1947) and the film noir Force of Evil (1948), a box office failure whose reputation has soared in the years since its release. After Enterprise folded in the late 1940s Garfield eventually found himself back at Warners, being directed once again by Michael Curtiz, and playing an older version of the "noir-ish" screen personality developed at Warners early in his career—a rebellious man slowly being crushed by circumstances outside his control. The Breaking Point was the next-to-last film Garfield would make before his death in 1952 (a lifelong sufferer of heart disease, he was barely thirty-nine years old), and it gave him one of the best roles of his career.

In this film loosely based on Ernest Hemingway's novel To Have and Have Not (which in 1944 had been even more loosely adapted by Howard Hawks), Garfield is Harry Morgan, the owner of a charter fishing boat based in Southern California. Deeply in debt, he hires out his boat to a businessman for a fishing trip to Mexico and finds that accompanying the businessman is his younger girl friend, the attractive but rather common Leona (a blonde Patricia Neal), who immediately begins flirting with Harry. When the businessman abandons Harry in Mexico without paying, he is forced to accept the proposition of a shady lawyer to smuggle a group of illegal aliens into the U.S. From this point Harry's problems snowball until he finds himself involved with gangsters, robbery, and murder. At the end of the film Harry is held captive on his own boat by three murderous thugs and must use his wits to try to outmaneuver them in an onboard showdown that is sure to remind you of Key Largo.

There's little doubt that as good a film as The Breaking Point is—and it is a good one, probably the last film of this quality directed by Michael Curtiz, one of the most versatile and reliable of the Warners house directors of the thirties and forties—this is pretty much Garfield's movie. Harry Morgan, the character Garfield plays, is a former serviceman, a Naval officer in the Second World War who like many returning veterans came home with ambitious plans for the future. But Harry's plans for a fleet of fishing and charter boats haven't succeeded. He now finds himself eking out a living with his one boat while financial problems threaten to overwhelm him. No matter how much his wife urges him to give up the boat, he stubbornly refuses. Not only would that mean the end of his plans, but it would also mean a spiritual defeat. For Harry land means trouble; he feels truly at peace and in control of his life only on the water.

Garfield handles the tough, alienated side of Harry in a way that makes him seem an older version of the characters Garfield played in the forties. But Harry, while in many ways still the familiar Garfield loner battling the world, is more experienced and more settled. This is the only Garfield film I've seen in which he plays a family man. Harry has a wife (Phyllis Thaxter) and two young daughters, and the scenes with his family, especially the daughters, show a tender side that for Garfield seems completely new. Despite all the external pressures in Harry's life, he has an easy rapport with his wife and real affection for his daughters, traits that are shown in simple, homey scenes where he shares a joke with his wife or gives his excited daughters small presents he has brought from Mexico. 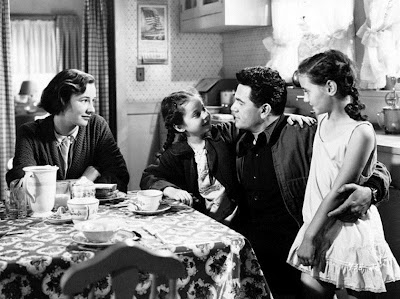 A basically decent guy, Harry finds himself compelled by circumstances to become involved with corruption while still trying to hold on to his moral center. That might seem a self-defeating thing to attempt, but it is exactly what Harry would do. "You do everything so hard," the sleazy lawyer played by Wallace Ford tells him. "You don't bend, you just break when the load gets too heavy." Not only must Harry face the temptation of crime as an easy fix to his financial problems; he must also face the personal temptation presented by Leona, who he keeps running into even after returning from Mexico, and who keeps throwing herself at him. There is friction in Harry's marriage, largely over the family's future, but it's also plain that Harry is experiencing a bit of what today would be called midlife crisis. He's an adventurous, active man, and his disappointment in his present circumstances and his dread of the future ("I wake up in the night sweating. I'm in trouble and there's no way out," he tells his wife) cause the anarchic side of his personality to respond to the appeal of Leona's overtures.

Patricia Neal plays Leona, and she plays her very well indeed. Even though her part is clearly secondary to Garfield's, The Breaking Point gives Neal one of the most interesting and psychologically complex of her early roles. Her delivery of the sexually insinuating dialogue is refreshingly tongue-in-cheek, almost a sendup of the film noir femme fatale. (At one point she teases Harry with Martha Vickers's signature line from The Big Sleep: "You're cute." "It's the way I comb my hair," he snaps back in that surly John Garfield manner.) Her Leona is so bold, impudent, and openly seductive towards Harry that her behavior appears almost ironic, yet ironic in a way intended to conceal her true feelings by mocking them. There's a lot more than attitude, though, in Neal's performance, which like Garfield's is built on the tension between her cynical exterior and her sometimes quite opposite inner emotions. She makes us see that like Harry, Leona is a disappointed person who doesn't feel in control of her life and is racked by fears for the future, and that she recognizes those feelings in common as a strong emotional connection between her and Harry.

In the end, Harry does experience an epiphany in which he realizes that being a loner against the world—the quintessential Garfield character in the quintessential Garfield situation—is a futile way to live. When Harry tells his wife at the conclusion of the film, "A man alone ain't got no chance," it signals an important evolution of the well-established John Garfield screen personality. It's an admission that even an individualist like this must connect with other people and the rest of the world to thrive. It's a shame we'll never be able to see how this gentler, wiser John Garfield might have developed. But what a tantalizing glimpse The Breaking Point gives of Garfield as a man taking first steps toward the kind of inner serenity possible only for someone at peace with himself and the world.

This post is part of the John Garfield 100th Birthday Blogathon hosted by the classic movie site They Don't Make 'Em Like They Used To. Click here for more information on the blogathon and a full schedule of posts.
Labels: John Garfield, Michael Curtiz, Patricia Neal