"I like to think of neorealism as the seed from which a beautiful, solid tree has grown, and the branches on that tree represent virtually all the major Italian filmmakers of the postwar era."
—Martin Scorsese in My Voyage to Italy 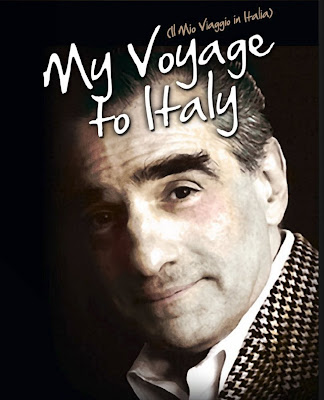 My Voyage to Italy—part reminiscence, part film essay—is Martin Scorsese's splendid four-hour long valentine to post-World War Two Italian cinema. Concentrating on movies made between Open City (1945) and 8½ (1963), it examines the origins of the neorealist movement, which he calls "the most precious moment in film history," and its influence on Italian cinema. Scorsese focuses on the five most important directors who came out of the movement and have been inspirations both for his own films and in one way or another for nearly all Italian films made after them.

Scorsese spends the first half hour of his documentary relating how as a boy he first became acquainted with Italian cinema—by watching subtitled Italian movies shown on television on Friday nights with his family and neighbors, beginning with the first Italian movie he ever saw, the neo-realist Roberto Rossellini's Paisan. He tells how his grandparents, immigrants from Sicily who never even became American citizens, and his family's friends and neighbors in New York's Little Italy, where he grew up, gathered at his home to watch these movies for scenes of their homeland and to hear the Sicilian dialect they spoke themselves being spoken by the actors in the movies. The experience was the first time he really became aware of his own family's origins, and for a young boy already fascinated with the American movies he saw regularly with his father, he found that a new world of cinema had opened to him. Interspersed with excerpts from Italian films are home movies of his own family and neighborhood in the late 1940s. Together they paint a vivid picture of Scorsese's own boyhood, both the real and the imaginary.

After a half hour or so, Scorsese moves on to an overview of the neorealist movement and then to the films and directors themselves. Neorealism was, he says, something that arose spontaneously. It came about not as a deliberate movement based on a manifesto of any kind, but as a collective response to Italy's traumas of World War Two. It was born not only of the psychic need to make sense of the painful events of the recent past, an aim that required greater realism than was typical of prewar Italian movies, but also of practical necessity. With the studios bombed and then taken over as refugee camps, filmmakers turned to the streets and bombed-out ruins of the cities and to the countryside for locations. When there weren't enough professional actors to populate a movie, they turned to non-professionals. These decisions initially born of necessity led to an artistic style that perfectly suited the desire of these directors to capture reality on film, as he puts it, "to dissolve the barrier between documentary and film."

Scorsese spends nearly an hour on an exhaustive survey of the early films of Roberto Rossellini, identifying his first postwar work, Open City, as the first true neorealist movie, as have film scholars virtually without exception. He illustrates the movie with copious excerpts, something he continues for the rest of the documentary. Some of his descriptions of the films run in excess of ten minutes (the longest is a twenty minute segment on Luchino Visconti's Senso that includes a fascinating analysis of the movie's color design) and practically consist of a condensed version of the movie, an approach which provides a visual and emotional feast for those already familiar with the films, but which those unfamiliar with them and sensitive to spoilers might find too detailed. Curiously, the one major early Rossellini work he barely touches on is Journey to Italy (1954), the one from which he took the title of his own documentary, although the reason for this apparent neglect becomes clear when he returns to this film later on.

From Rossellini, Scorsese moves next to Vittorio de Sica, noting that if Rossellini filmed the facts, de Sica concentrated on the emotional responses of his characters to such an extent that, as Orson Welles remarked, the camera became invisible. He continues with the other major neorealist directors—Luchino Visconti, Federico Fellini, and Michelangelo Antonioni. As he examines each in turn, he shows how as a director, each of these men contributed something more to Italian cinema as his own personal style evolved and he departed further from the original documentary-like aspirations of early neo-realism, leading postwar Italian cinema to its zenith in the early 1960s. To Rossellini's objective realism and de Sica's stress on emotions, Visconti added politics, history, and an emphasis on style that transformed his films into something almost operatic. Fellini brought to Italian cinema a strong sense of autobiography, injecting into each of his films an authenticity based on his own personal experience. Antonioni embarked in his films on an existential quest that ended in enigma, a search for meaning in life that yielded no clear answers beyond the fact that individuals seeking connection, whether with one another or with life itself, are fated to isolation.

Towards the end of My Voyage to Italy, Scorsese finally returns to Rossellini's Journey to Italy, right before turning to the work of Michelangelo Antonioni. As I watched scenes from Journey to Italy, I was struck by how much they seemed like scenes from an Antonioni movie of the early 1960s, a real surprise since Antonioni's sensibility at this time strikes me as having little in common with Rossellini's straightforward nerealism. Scorsese then gives us a further surprise by concluding My Voyage to Italy with a thorough and loving examination of Fellini's 8½, another film that seems in a world far away not only from Rossellini's but at times from reality itself, a film that Scorsese compares to experiencing a dream. In this way Scorsese ingeniously manages to relate the origins of neorealism to its ultimate, and seemingly far-removed, expressions.

Scorsese makes My Voyage to Italy a moving and personal experience. He shows how these directors and their films affected him both as an impressionable boy and as an adult, inspiring him and teaching him in his own career as a film director. Yet he manages to filter his perceptions through his own reactions to these films without ever falling into the trap of this New Journalism approach to non-fiction—solipsism, that is, making himself the main subject. Even more impressively, he makes an informative movie of real substance, offering penetrating and insightful analysis of those five directors who emerged from neo-realism and of their work, and he does this without even a trace of academic or intellectual pretension.

I just cannot recommend this documentary more enthusiastically to anyone interested in Scorsese, in the neorealist movement, in Italian cinema, in postwar European cinema, or in film history in general. If you are already well-informed on the subjects covered by Scorsese, you can revisit them all over again, like a cinematic gourmet savoring a banquet of many of your favorite dishes. If you consider yourself moderately familiar with these subjects, you're certain to find previously untasted delights to add to your must-see list, just as I did. If you're new to these subjects or just want to learn more about them, I can't think of a better place to start. In any case, I can guarantee that a real treat lies in store.

"a film about Liberation and its price"

• On The Flowers of St. Francis:

"a film about having faith, the embracing of faith"

• On Journey to Italy:

"it feels like you're watching a real-life married couple"

"small events and details are the movie"

• On The Bicycle Thieves:

"Visconti worked through total artifice as a way to the truth"

"in the films of his I love the best, the emotions feel very personal, as though they've actually been lived through"

"a milestone, a watershed, a breakthrough . . . a new kind of storytelling"

"[Fellini] reinvented what we all knew as cinema"

"the pain of just being alive"

"a real step forward in storytelling . . . it feels less like a story and more like a poem"

"the final seven minutes . . . suggested that the possibilities in cinema were absolutely limitless"

"I wish that every young person with an interest in film could have had the same experience that I had back in those days—to be young, open to everything, and to walk into the theater and have your expectations not just met, but surpassed, time and time again."
Labels: Documentary, Italian Cinema, Martin Scorsese