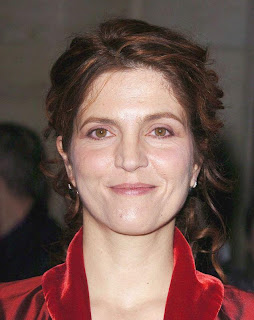 In 2000 Agnès Jaoui, who had been a film, television, and stage actress for more than fifteen years, ever since she was a teenager, directed her first film, The Taste of Others, which she also co-wrote with her husband Jean-Pierre Bacri and, along with Bacri, acted in. The Taste of Others established the essentials of Jaoui's style in all three movies she has written and directed. Jaoui treats plot as a process of discovery, using incident to illuminate character. Each of her films is constructed around a set of characters loosely connected by circumstances. They interact in a variety of shifting combinations in what might seem a casual, almost semi-improvised plot but is actually a skillfully engineered series of incidents that cumulatively reveal more about these people than we first saw or were shown. We may believe we immediately recognize these people, who seem straightforward types conforming to a set of self-defined behavioral patterns. But placed before the observing lens of Jaoui's camera, they gradually become real people with distinct identities and deeper personalities than at first seemed possible.

The Taste of Others opens in a restaurant. In the main dining room, three people are having a business lunch, while in the smaller room at the front of the restaurant, two men dressed in anonymous dark suits have a desultory conversation—at one point comparing how many women they have slept with during their lives—while sipping drinks. The three executives get up to leave, and as they pass through the smaller room, the two men follow them out. It is only when they all get into the same car, the executives in the back seat and the two other men in the front seat, that we realize they are together. One of the men in the rear is Jean-Jacques Castella (Jean-Pierre Bacri), a wealthy middle-aged industrialist. The men in the front are his driver Bruno and his bodyguard Franck Moreno.

Later we meet Castella's wife, an interior designer whose main preoccupations seem to be imposing on others her inflexible opinions on correctness in décor (the rooms she decorates are hideous in their oppressively fussy idea of tastefulness) and her spoiled, snappish pet dog. When the Castellas go to the theater that evening to see a performance of Racine's Bérénice—something Castella sees as a frivolous waste of time but submits to because his niece has a small role in the play—Castella becomes fascinated by the lead actress, Clara Devaux (Anne Alvaro). He recognizes her because that afternoon he interviewed her as a candidate to teach him conversational English and, quickly taking a dislike to her, dismissed her. Now he sees her in a different light and not only insists on meeting her backstage but decides to hire her to tutor him after all. 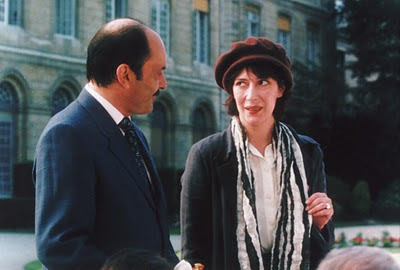 Clara barely tolerates the conservative, bourgeois Castella, who lives in a utilitarian world of business and finance untouched by aesthetics or ideas. But Castella, growing more and more infatuated with Clara, begins insinuating himself into her bohemian world, hanging out in the evenings at the bar frequented by Clara and her friends in the theater and art worlds. Here we meet the worldly barmaid Manie (played by Jaoui herself), a spontaneous, independent woman who supplements her income by dealing hash and grass on the side. Bruno and Franck, who accompany Castella to the bar, also become acquainted with her and both end up sleeping with her. For the chauffeur Bruno, a sad sack whose fiancée is away in the US and who spends his spare time playing the flute in an amateur ensemble, this is a fleeting dalliance. But Franck, an ex-policeman and compulsive womanizer, and the free-spirited Manie soon fall into a relationship and it begins to look as though these two emotional gypsies might settle down together.

As the film proceeds, we begin to see the characters in new ways. But more important, they begin to see one other in new ways, and these unanticipated insights have a subtly transformative effect on them. People from very different worlds find their worlds beginning to overlap, and the result of this is that by the end of the movie each of them has been altered in some way. These alterations don't particularly result in momentous shifts in personality. Rather the events in the film lead the characters incrementally to less obvious changes—greater self-awareness and a deeper understanding of others, and above all a more willing acceptance of both the virtues and the shortcomings in themselves and in others.

The central relationship is that of Castella and Clara. The hidebound, emotionally repressed Castella finds his outlook on life broadened by his association with Clara more than he ever imagined possible. Clara inspires him to find within himself a previously unexpressed sensitivity and a new openness to the unconventional. For her part, Clara is forced by the eventual recognition of her dismissive stereotyping of Castella to see that despite what she fancies as her liberal mindset, she is just as capable of judgmental narrow-mindedness as philistines like Castella. This realization spurs her to develop a more tolerant attitude toward those less attuned to their inner lives than artists like herself. The other characters in the movie—Madame Castella and Bruno the driver, Franck the bodyguard and Manie the fiercely self-reliant barmaid—have similar, if less dramatic, effects on each other. The film was nominated for the Oscar as best foreign language film and for numerous Césars. Bacri, Alvaro, and Gérard Lanvin, who plays the bodyguard Franck, won well-deserved Césars for acting, and Jaoui received a César for best film and shared another with Bacri for best screenplay. (She was also nominated for directing and for her acting in the small but plum role of Manie).

Jaoui's two later films follow the same pattern as The Taste of Others. In Look at Me (2004) a group of writers and musicians become involved in the lives of one another. The main characters are Lolita (Marilou Berry), an aspiring young classical singer with a weight problem and a bad case of low self-esteem, and her father (Bacri), a self-absorbed celebrity novelist with severe writer's block who is completely blind to the needs and feelings of his daughter and everyone else around him. Jaoui, who plays Lolita's singing teacher, is herself married to a writer who wants to use Lolita's father to break into the big time. Jaoui addresses the issue of the demands that an artist's striving for career success place on one's treatment of other people and the difficulty of maintaining one's basic humanity in this situation. In Let It Rain (2008) Jaoui plays Agathe Villanova, a feminist politician who has been chosen by her party to stand for office in her home district in the south of France and returns there to campaign. There she visits her family home, where she must contend with her resentful sister and unemployed brother-in-law and two filmmakers who want to shoot a documentary about her—an annoying scatterbrain played by Bacri and his ambitious assistant, a young Frenchman of North African origin whose mother happens to be the longtime housekeeper of Agathe's own family.

Like The Taste of Others, Jaoui's later films showcase her strengths as a writer/director—the ability to juggle multiple story lines gracefully, clearly observed characters, and an emphasis on carefully devised interactions between those characters that succinctly articulate their essential natures. Not surprisingly, given her background in acting, Jaoui proves to be a most sympathetic director of actors, eliciting truthful performances that make the characters seem thoroughly inhabited. All three of Jaoui's films plainly show her to be a director whose vision is that of a classical humanist filmmaker. When it comes to her characters, she eschews facile categorization in favor of probing beneath surface identity to find both the strength and weakness, the petty and the generous, the nice and the not-so-nice in each person in the movie. What she wants from the viewer above all is not to like or dislike her characters, but to understand them in all their complexity, confusion, and contradiction and to accept each of them as a unique individual.
Labels: Agnes Jaoui, French Cinema