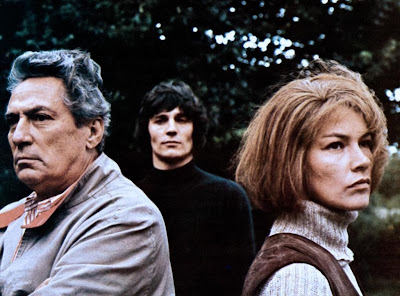 Today it's unlikely that experienced moviegoers find the notion of openly gay mainstream filmmakers like Pedro Almodóvar, Lisa Cholodenko, or Todd Haynes particularly novel. But this wasn't always the case. The history of cinema before about 1970 is filled with gay filmmakers who were obliged to conceal their sexuality, both in their public lives and in the films they directed, to protect their careers. The astute viewer can perhaps in hindsight detect a covert gay sensibility in the work of directors like F. W. Murnau, George Cukor, Luchino Visconti, or even Nicholas Ray. But unlike experimental filmmakers such as Kenneth Anger, gay commercial filmmakers were not free to express their sexuality in their work. While young directors just beginning their careers in the seventies like Rainer Werner Fassbinder made no effort to conceal their sexual orientation, some older directors who had worked in the industry in more closeted times were just beginning to acknowledge their own sexuality and to make films that dealt candidly with gay themes. One of the first of these was the British director John Schlesinger.

Schlesinger's 1965 film Darling did have one minor character who was gay, the female main character's male "gay buddy," a character type that eventually became so familiar—and so acceptable to mainstream audiences—that a popular television sitcom was built on this premise. When Schlesinger made Midnight Cowboy in 1969, the film received an X rating on release (it was later reduced to an R rating), largely for its sexual content. But aside from one or two brief "gay for pay" encounters, the main character's escapades as a male prostitute were strictly heterosexual. As for the exact nature of the relationship between Joe Buck and Ratso Rizzo, Schlesinger chose to take the Of Mice and Men route by making one character apparently heterosexual and ignoring the sexuality of the other altogether, thus creating the appearance that the relationship between the film's two main male characters was one of platonic devotion. Just two years later, however, Schlesinger was at last ready to tackle the subject of gay sexuality head-on in Sunday Bloody Sunday, which he has called "the most personal of all my films." The film's treatment of the subject may seem mild by today's standards, but I recall seeing the movie in a theater during its first run, when the sudden—and plainly erotic—kiss between Peter Finch and Murray Head a few minutes into the film had much the same galvanic effect on the audience as Sissy Spacek's hand popping out of the grave at the end of Carrie a few years later: nearly the entire audience reacted collectively with a gasp of shock and surprise. 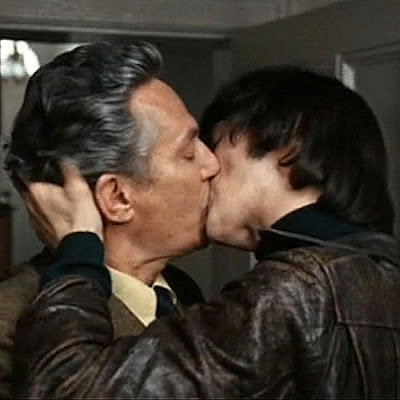 Sunday Bloody Sunday is a film about one of the oldest subjects in movies, the love triangle. The difference here is that the love object at the apex of the triangle is a bisexual young man, Bob Elkin (Murray Head), and the two people competing for his affections are a straight woman, Alex Greville (Glenda Jackson), and a gay man, Daniel Hirsh (Peter Finch). The film takes place over a period of about ten days, its plot consisting of the alternating interactions of Bob with each of his lovers. Although the film follows Alex and Daniel even when Bob is not with them, it shows little of Bob's life on his own and nothing of his family or background. In contrast, we meet Alex's parents when she has Sunday dinner with them and Daniel's family when he attends his nephew's bar mitzvah, and both Alex and Bob have one brief stream-of-consciousness flash memory that economically limns a background for them. 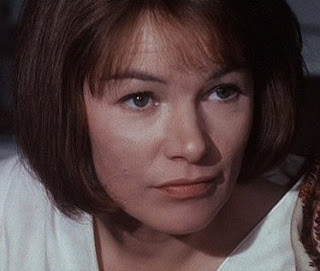 Alex is a thirtyish divorcée who works in an employment service. Her parents are quite well off, so it is likely that from childhood she has enjoyed a privileged upper middle-class life and education. She has too resilient a disposition to be called depressed but is obviously unhappy with her life. When she tells Bob she's working on a project for her office, she is in fact drafting a letter of resignation from a stultifying job she hates. After the dinner she has with her parents, her conversation with her mother (Peggy Ashcroft) tells us that this is also the case with her marriage and that is why she walked out on it. When her mother urges her to have a more practical attitude toward marriage, Alex's response is that she is not going to settle for a passionless and sexless marriage in exchange for a comfortable life, as her mother has. She is clearly besotted with Bob, and the basis of her feelings for him is equally clearly his sexual appeal. A possessive woman, Alex plainly resents having to share him. 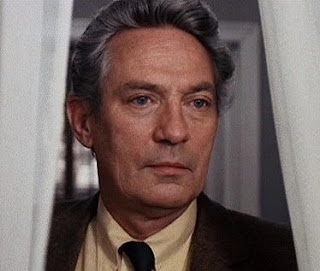 Daniel Hirsh is a doctor who appears to be in his forties. He may be discreet about his sexuality—when he attends that bar mitzvah, it is obvious that his family has no idea he is gay—but he is a sexually active man. The appraising glances he gives good-looking young men he happens across and a chance encounter with a former one-night-stand (Jon Finch) make this apparent. The way he relates to his patients shows us that he is a sensitive, nurturing man, a man who genuinely wants to help the people who seek his professional help, often for reasons not strictly medical. Yet he is too realistic and observant to believe that any help he offers beyond medication is likely to be acted on. His attitude toward Bob seems much the same. Even though he clearly has expectations of a certain level of commitment from Bob, he seems to sense how temperamentally incapable Bob is of meeting those expectations.

If the film sketches complete and individualized personalities for Alex and Daniel, it presents Bob as an enigma. Bob is an artist who expresses himself through his work. Yet what we see of his work is very much like Bob himself—imaginative and flashy yet at the same time glib and rather characterless. Simply put, there doesn't appear to be a great deal to him beneath the surface. As he says to Daniel at one point, "I know you're not getting enough of me. But you're getting all there is." I've read more than one review of this film that complain it is a mystery what two intelligent, sophisticated people like Alex and Daniel see in someone as shallow and opaque as Bob. But I've always thought that his blankness explains his appeal to Alex and Daniel in psychological terms which are actually quite persuasive.

For one thing, his freedom of personality makes him appear to be everything they are not but perhaps would like to be. Both Alex and Daniel have lives that are in all ways constrained—by their personal histories, their work, their education, their social position. Bob strikes me as exactly the kind of aimless, mercurial, and unconventional person who would appeal to such people. His very blankness allows—indeed encourages—them to project onto him whatever it is they would like to see in him. And his mild personality makes him quite compliant, but only up to a point. That point is when they seem to be implicitly demanding some kind of commitment from him, for such a demand is the very thing guaranteed to bring on an avoidant reaction. One begins to wonder if he is juggling two relationships precisely because this means he won't be obligated to commit fully to either of them.

Places are very important in this film. One of the first things we see in the movie is the home of each of the three main characters, and the environment each one lives in immediately tells us a great deal about them. Alex's flat, with its huge all-purpose downstairs room and upstairs sleeping loft, is the home of a rootless young professional. When she returns from a weekend spent with Bob house sitting the home of friends and looks around the flat, with dirty dishes piled in the small sink and ashtrays spilled on the carpet, you can see her dismay at the dreariness of her life. Daniel's elegant terraced house, with its orderly bookshelf-lined walls, traditional furnishings, downstairs surgery, and rear garden featuring one of Bob's installations, reflects his profession, income, and social class. Bob's small flat is largely an artist's studio, a chaotic workplace crammed with works in progress. It's hard to believe that anyone actually spends much time living there, and that seems entirely congruent with what we see of Bob, that what emotional life he has is as an extension of the emotions of Alex and Daniel.

The exemplary screenplay by Penelope Gilliatt—it deservedly received many awards including an Oscar nomination—offers Glenda Jackson and Peter Finch, both of whom were also nominated for Oscars, rich opportunities, and both turn in remarkable performances. Jackson always seemed able to project strength effortlessly, but here her natural forcefulness is tempered with uncharacteristic emotional neediness, a most compelling combination. Peter Finch, who has never been better, is a revelation in a role that would seem more naturally suited to Dirk Bogarde or Alan Bates (who was indeed Schlesinger's first choice for the part). His direct-to-camera monologue that ends the film is just stunning. Even though John Schlesinger later said he regretted casting Murray Head as Bob ("I'd have cast someone else, someone funnier who would have made them [Alex and Daniel] laugh," he said in a 1994 interview), I find Head most convincing as a beautiful cipher. A more skilled actor might have been unable to avoid suggesting some depth to the character. Numerous smaller roles are filled with a roster of wonderful actors from Peggy Ashcroft and Maurice Denham to a surprisingly young June Brown (she has been in the cast of EastEnders since 1985) as a depressed patient, and look fast for an unbilled fourteen year-old Daniel Day-Lewis as a juvenile delinquent vandalizing cars.

In its way, Sunday Bloody Sunday is as much an advance in the portrayal of gays in mainstream movies as The Boys in the Band or Brokeback Mountain. But it is a landmark film not because it deals with being gay or with the social and personal problems that entails, but precisely because it doesn't deal with any of those issues. It takes a gay character in love and treats him as though he is like any other person in the same situation. This is a movie about people, not polemics. By taking the character of Daniel Hirsh and making absolutely nothing special of his gayness, it makes him a human being first and a gay man second. It presents a gay man (and also a bisexual man) not as something Other, but as someone entirely ordinary and universally understandable. In other words, exactly like anyone else.