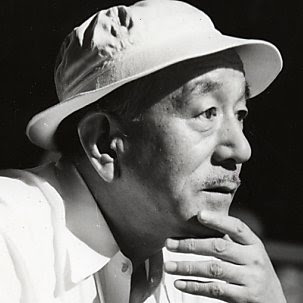 The Only Son was the thirty-sixth of fifty-four films Yasujiro Ozu (1903-1963) directed in his lifetime and his first sound film. Originally conceived and partially shot as a silent, it was reconceived as a sound picture and the original footage reshot with sound. "Even though I was well aware that talkies were a totally different ballgame, I couldn't help slipping back into [the] style of silents," Ozu said of his experience making this film. Compared to Ozu's later movies, The Only Son does seem to have a stripped-down, simplified narrative, and the dialogue in the film does seem almost entirely functional, as though Ozu had not yet fully assimilated how to use dialogue to convey greater complexity of plot and exposition than was practical in the silent cinema. Yet the picture fits comfortably into Ozu's later filmography, showing his amazing mastery of the visual element of filmmaking and focusing on themes that Ozu would continue to explore for the rest of his career.

The Only Son opens with a quotation from the Japanese short story writer Ryunosuke Akutagawa (he wrote the story that Kurosawa's Rashomon is based on): "Life's tragedy begins with the bond between parent and child." This statement could almost sum up not only the theme of this movie, but the theme of practically every movie of Ozu's I've ever seen, for the bond between parents and children is a subject he explored in film after film. Even though in his films it rarely results in tragedy, the perilous relationship between parent and child does often lead to anxiety, sadness, and disappointment, as it does in The Only Son. The film opens in 1923 in the home of Tsune Nonomiya, a widowed mother, and her young son, Ryosuke, in the countryside. The boy, who has just left elementary school, presses his mother to let him continue to middle school, and she tells him she can't afford to. After the boy's teacher unexpectedly visits Tsune and tells her that Ryosuke has already told his classmates he will be attending middle school, she is furious. Later she relents and does send him away to continue his education as a boarder even though it means great financial hardship for her. 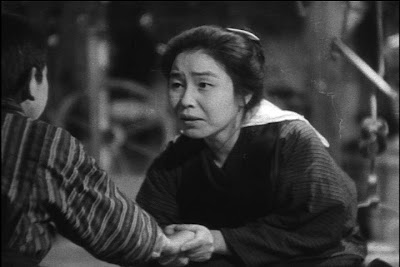 After this brief introductory sequence, the film moves forward twelve years. Ryosuke is now a teacher living in Tokyo with his wife and infant son, and Tsune is making her first visit to Tokyo. The rest of the picture deals with the few days she spends there with her son. Her image of her son as a successful young urban professional is soon destroyed, however, as it quickly becomes clear that Ryosuke's job is one of little prestige and that he lives in a shabby neighborhood barely scraping by on his low salary. Just to feed his mother and keep her entertained during her visit, he must beg for advances on his salary and borrow money from colleagues.

The film builds slowly to two key scenes. As mother and son are out walking one day near the garbage incinerator for Tokyo, they sit down to rest. Both are mentally exhausted from the effort of keeping up appearances and pretending nothing is wrong, and they finally reveal to each other their true feelings about the situation. He confesses his disappointment in the way his life has turned out, his belief that he will advance no further in his career, and the guilt he feels about the effect his failure will have on his mother. She responds heatedly by denouncing his defeatist attitude and saying that all her sacrifices to put him through school—she has even sold their house and land and now lives in a tenement for employees of the textile factory where she works—were not worth it. 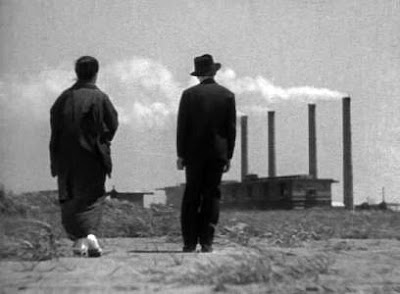 With relations between the two at their lowest, they prepare for one last sightseeing excursion before she returns home. Their day out is interrupted, however, when a neighbor's boy is kicked by a horse and seriously injured. Ryosuke intervenes, carrying the boy to the hospital in his arms and giving the money for the excursion to the boy's impoverished mother to help pay the medical bills. In typical Ozu fashion, the film ends not in a big emotional catharsis, but quietly, in a reflective moment of insight. After witnessing her son's altruistic behavior, Tsune realizes that the honorable values and the humanity of his inner nature are more important—and more worthy of admiration—than material success, and that in itself becomes for her a source of pride. Like so many of Ozu's movies, The Only Son reaches its climax in a moment of calm resignation and the realization that even a small satisfaction in life is something to be grateful for.

Next week I'll be writing about There Was a Father (1942), one of two films Ozu made during World War Two. It and The Only Son were recently released by Criterion as a box set.
Labels: Asian Cinema, Yasujiro Ozu