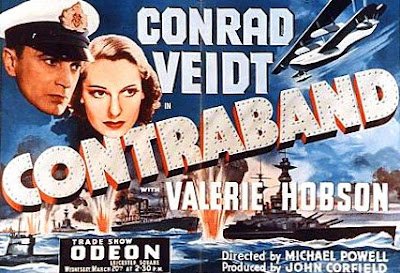 With Great Britain declaring war on Germany within weeks of its release, The Spy in Black, the first collaboration between Michael Powell and Emeric Pressburger, was a smash hit in Britain. It was also a huge success across the Atlantic when Columbia Pictures released it in October 1939 in the US, where it was retitled U-Boat 29 after the name of the submarine Conrad Veidt commands in the film. (It didn't hurt the film's box office that less than a month before it opened in the US, the first British Navy ship to be lost in the war, the aircraft carrier HMS Courageous, had sunk with the loss of 518 lives after being torpedoed by an actual German submarine named U-29.) When Powell suggested to Pressburger that they follow up The Spy in Black with another picture starring Conrad Veidt and Valerie Hobson, Pressburger told him he would think about it while Powell vacationed in Scotland. A few days later Powell received a message from Pressburger saying that he had begun writing the story for the proposed film and needed Powell to return to London immediately to work with him on it.

Like The Spy in Black, the new film, titled Contraband, was an espionage thriller. Conrad Veidt plays Capt. Andersen, the captain of a Danish freighter, and Valerie Hobson plays a mysterious passenger, Mrs. Sorensen. As the ship passes through the English Channel on its way to Rotterdam, it is stopped by the British naval authorities, who are searching all merchant ships and seizing war matériel bound for Germany. Mrs. Sorensen first attracts Capt. Andersen's attention with her contrary behavior at the breakfast table, where she refuses to wear her life jacket as required. During a dressing down in the captain's quarters, she uses the opportunity to steal two shore passes the British have provided the captain and his first mate so they can make an overnight trip to London. Capt. Andersen soon sets off in pursuit of Mrs. Sorensen and her friend (Esmond Knight, who had appeared in two of Powell's earlier quota quickies and would go on to make six more films with Powell, most notably Black Narcissus).

This section of the film occupies about twenty minutes of its hour and a half running time, and even Powell admitted in his autobiography, A Life in Movies, that it is the least interesting part of the picture: "So far, it was a conventional beginning to an obvious romance between two attractive principals. Only the . . . charisma of the actor and actress, saved the scenes between them from banality." Indeed, the purpose of this section of the film was as much propagandistic—to send Hitler the message that Britain was fully prepared to control the seas and prevent war matériel from reaching Germany—as it was to set the narrative in motion.

After the action moves to London, the film picks up considerably as it becomes a tremendously thrilling race against the clock as Capt. Andersen and Mrs. Sorensen try to deliver a vital message to the War Office while tangling with a band of vicious Nazi spies and falling in love. All of this takes place in the dead of night during the London blackout. Powell called the picture "basically a chase in the blackout" and lamented that the US title, Blackout, wasn't used in Britain. He was right, for if there has ever been a movie with a more evocative sense of the wartime blackout in London, I've not seen it. 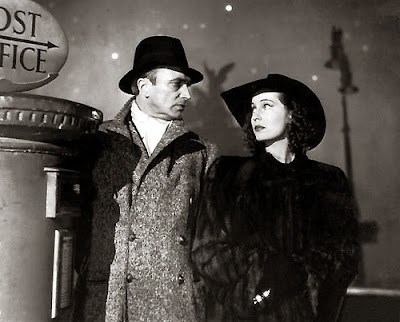 Contraband is in every respect an advance over The Spy in Black. Apart from that rather rudimentary opening passage on the freighter, the film is more inventive, more consistent in tone, progresses more smoothly from one event to the next, and is better paced, building in intensity without the occasional narrative lull of The Spy in Black. Much of this is surely down to the fact that the screenplay was completely original. Even though The Spy in Black kept little from the novel it was based on aside from the title and almost completely reorganized what did remain, Powell and Pressburger were still in some ways constrained by the basic elements of the source material. In Contraband, however, they were free to tailor the plot to their stars and to their own interests and inclinations. In this, Contraband was the forerunner of their great films of the 1940s, which by and large were based on original ideas that were then molded into a form reflecting the imaginations of the creative pair.

Unlike The Spy in Black, Contraband contains large doses of humor—not just the comic relief of Spy, but a deft blend of whimsicality and suspense that recalls the best films of Alfred Hitchcock from the the 1930s. Moreover, Powell and Pressburger emphasize the interplay and the evolving romantic relationship between Veidt and Hobson in the same way Hitchcock so memorably did with Robert Donat and Madeleine Carroll in The 39 Steps and Michael Redgrave and Margaret Lockwood in The Lady Vanishes. This not only makes their characters more central to the plot, but gives Veidt and Hobson a chance to shine, to show the range they were capable of, in a way the more somber tone of The Spy in Black didn't.

Additional humor is provided by the Scottish actor Hay Petrie, who specialized in eccentric characters and had a small but vivid role in The Spy in Black. He has two parts in Contraband, one as Capt. Andersen's first mate, the other as his twin brother who owns a London restaurant called The Three Vikings and who, along with his staff, becomes instrumental in helping Capt. Andersen rescue Mrs. Sorensen from the Nazi spies and foil their scheme. The Nazi gang, by the way, far from being humorous, is genuinely sinister, led by character actor Raymond Lovell, who is aided by three henchmen whom Veidt and Hobson call the Brothers Grimm, played by chubby Peter Bull, a baby-faced Leo Genn, and a hatchet-faced actor named Stuart Latham.

The plot of Contraband permits Powell—aided by the brilliant production design of Alfred Junge (they would work together on six more films, including some of Powell's most important films of the 1940s, right up to Black Narcissus), and the cinematography of the great Freddie Young (Lawrence of Arabia)—to show off his nascent flair for the kind of stylish set pieces that would become a hallmark of the later Powell-Pressburger films. The scenes in the elaborately detailed headquarters of the spies, hidden in the basement of a night club. The tour of several night clubs by Capt. Andersen and the staff of The Three Vikings to locate the spies' hideout, guided only by Andersen's memory of the music he heard from the basement before escaping. (A scene with 19-year old Deborah Kerr as a cigarette girl in one of these night clubs ended up on the cutting room floor.) No less than two vertiginous chases across rooftops that will send the pulses of acrophobes everywhere racing. A shootout between Andersen and the Nazis in the Patriotic Bust Co., filled with plaster busts of Neville Chamberlain. All these are masterfully realized set pieces that approach the best of Alfred Hitchcock's. 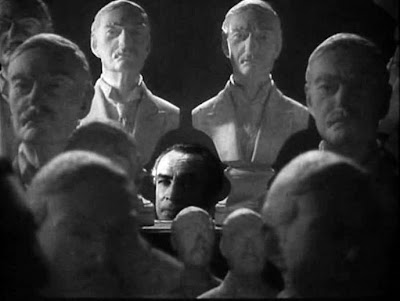 "It was all pure corn, but corn served up by professionals, and it worked," Powell says of Contraband. That may be an accurate description of the picture, but in saying this, I think Powell understates his achievement. The film may lack the rarefied aesthetic aspirations of Powell and Pressburger's later masterpieces, yet to call it merely "professional" downplays the level of artistry and inspiration present here. As an intelligent and imaginatively executed piece of purely escapist suspense entertainment, it "works" and then some, fulfilling genre expectations while delivering a wholly pleasurable experience of its own.
Labels: British Cinema, Michael Powell