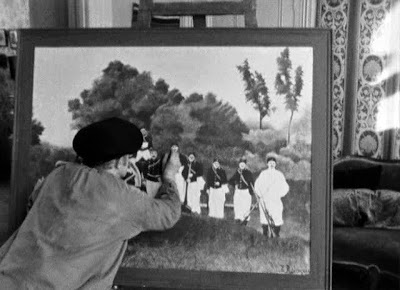 After his New Wave-influenced The Debussy Film, in which he presented the composer Claude Debussy's life as an intricate Chinese box of time, character, point of view, and narrative mode, Ken Russell next turned to the life of the French painter Henri Rousseau (1844-1910). In his film on Rousseau, Always on Sunday, Russell returns to the more conventional approach of his 1962 biography of the composer Edward Elgar. He uses a combination of impersonal voice-over narration (by Oliver Reed), first-person narration by Rousseau (the voice and accent of the actor playing Rousseau, James Lloyd, sound exactly like those of the English actor Jim Broadbent), passages from contemporary critics' reviews of Rousseau's work, music, and dramatized scenes—some factual, some imagined—to tell Rousseau's story.

Rather than covering all of Rousseau's life, Russell begins with Rousseau's retirement, at the age of fifty-one, after twenty years as a French government civil servant, to devote his life to painting. The very first scene shows Rousseau packing his civil servant's uniform and the French flag (he was a customs inspector) in a trunk and pouring mothballs over them. On the soundtrack we hear a chauvinistic passage from the valedictory letter of Rousseau's supervisor expressing the hope that in his retirement he will produce art which will raise the opinion of France in the estimation of "foreigners." If the title of the film, with its word play on the title of the movie Never on Sunday, doesn't make us suspect that something not quite straightforward is up, Russell gives us a clear indication within the first minute that this is a film whose tone—both visual and verbal—will combine seriousness with satire. That is the innovation of Always on Sunday—its combination of a conventional stylistic approach and a wildly unconventional and constantly shifting tone in which scenes of restrained visual beauty alternate with scenes of outlandish comic exaggeration.

Rousseau retired the same year the avant-garde painters of Paris founded the Salon des Indépendants. This was an annual exhibition in which painters like Manet, Monet, Cézanne, and Seurat could display work that had been rejected for the annual exhibition of the conservative Academy of Painting and Sculpture. In fact, anyone could enter work in the new exhibition, and this is exactly what Rousseau did that first year and nearly every year for the rest of his life. But Rousseau, a self-taught painter and ordinary middle-class retiree, was not part of the Impressionists or any other artistic movement or group and was ignored by other artists and scorned for his primitive style even by critics and those members of the public sympathetic to the new style of painting. This gives rise to a jaw-dropping scene early in the film in which Russell gives full rein to his mordant sense of humor and his extreme sense of dramatic hyperbole.

At the first exhibition of the Salon, a group of onlookers gathers around Rousseau, who is standing beside one of his paintings, and ridicule him. At the front of the group are a rakish gentleman and a woman in tawdry dress. As she gorges on a huge box of chocolates she is holding, the two trade repartee in working-class British accents for the benefit of amused bystanders. The painting, of Rousseau's Army unit, is titled 51st Artillery: A Portrait of the Artist and His Brothers at Arms (it's pictured above), and the couple are making fun of the fact that all of the soldiers look pretty much alike. (They do.) "Which one's he then?" the man asks. "That's him," she says, pointing to one of the soldiers. "No, uh, that's him," he replies, pointing to a different soldier. The pair continue trading those two lines—"That's him!" "That's him!"—faster and more shrilly as the whole group breaks up with laughter and the abashed Rousseau looks on in humiliation. Finally the woman silences the man by shoving a chocolate in his mouth. The entire absurd routine wouldn't seem out of place in an episode of Monty Python's Flying Circus.

Things get even more peculiar when Rousseau is adopted as a protégé by the proto-surrealist dramatist and poet Alfred Jarry, who promotes Rousseau's original painting style as "unconscious" genius. "Why should strangeness provoke mockery?" he asks. Their scenes together are filmed in a frenetic physical style which recalls that of silent comedy, not the balletic comedy of Chaplin or the acrobatic comedy of Keaton, but the hyperactive knockabout farce of the Keystone Kops. Rousseau and Jarry, who is played by the five-foot tall actress Annette Robertson from The Debussy Film, become a weird comedy team of physical opposites in the style of Laurel and Hardy. 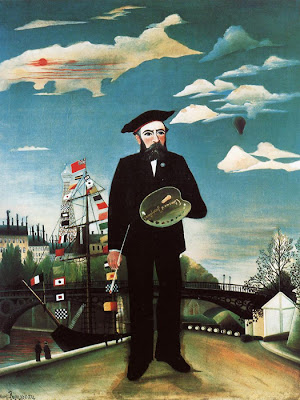 If the film later settles into a comparatively more sedate style, it never loses its satirical edge. Yet even though it pokes fun at just about everything in sight, it never makes fun of Rousseau, portraying him as a naïf (he actually considered himself a "realist" painter) and as a perennial outsider, too odd to be fully accepted by the straight world, too unfashionable to be embraced by the avant-garde art movement. Russell treats the neglect of Rousseau's talent during his lifetime—he was consistently dismissed by the public, critics, and other artists—seriously as well. Despite being championed by Jarry, the poet Guillaume Apollinaire, and very late in his life by Pablo Picasso, who discovered Rousseau after buying one of his paintings for a few dollars in a junk shop, Rousseau was only truly recognized as an innovative genius by the Cubists and Surrealists, who claimed him as a forerunner of their styles, years after his death.

Russell takes the satirical exaggeration of Always on Sunday even further in the fourth film in the set, his biography of Isadora Duncan (1877-1927), Isadora: The Biggest Dancer in the World, and this time extends it to the subject of the film herself. The film begins with a narrator reading from newspaper articles describing events in Isadora's life: being banned from Boston after a nude performance, the death of her two children when their car rolls into the Seine, the suicide of the mad Russian poet she married, Isadora's suicide attempt on the French Riviera, finally her bizarre death and her funeral. Accompanying this Citizen Kane-like opening, however, are images played strictly for farce, filmed in fast motion and edited like a manic two-reel silent comedy. The rest of Isadora continues in this vein, as lyrical passages lead to outrageously comic ones. But mostly the tone is comic, covering just about every variety of comedy—farce, satire, irony, parody, visual and verbal humor.

Aside from that opening newsreel-style sequence and a few passages where Isadora (Vivian Pickles) reads from her letters, the narration is by Sewell Stokes, a writer who was a friend of Isadora and is given credit along with Russell for the screenplay and sole credit for the dialogue. "I suppose Isadora had the most sensational life of any woman who has lived during this century," he begins, and what follows makes a strong case that he is not exaggerating. The film really has two stars. On 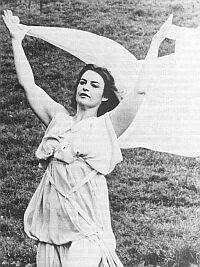 e of these is, of course, Isadora herself as portrayed by Pickles. A stage and television actress who was also a trained dancer, Pickles, with her flat-voweled, drawling imitation of an American accent, is a marvel as Isadora, whose motto was "To dance is to live."

A self-taught dancer born in California who modeled her movements on what she imagined to be those of dancers in the statues and frescoes of ancient Greece, Isadora didn't set out to shock, even if that was often her effect on others, but to express herself without the customary constraints of society and to spread her "message of beauty and freedom." She did this above all by using the fluidity of her body in motion to express through movement her inner life and blend her entire being with the moment. If Isadora as portrayed in this film is impossible to take completely seriously, Pickles makes it clear that Isadora took herself seriously. No matter how extravagant her private life or how theatrical and impetuous her behavior, Isadora was absolutely serious about her dancing, which Pickles makes seem earnest, graceful, and spontaneous.

The other star of Isadora is Ken Russell. Here Russell takes the application of the auteur principle to the film biography, begun in The Debussy Film, and goes all the way with it. One expects a film in this genre to be serious, especially when it is dealing with a life as frustrating, unorthodox, and at times tragic as Isadora Duncan's. (Think of Karel Reisz's Isadora with Vanessa Redgrave, which was made at the same time as this film.) Yet nearly everything about Russell's Isadora pulls the film in an opposite direction from its serious subject. Russell's seemingly capricious style is all over the map, veering from gorgeous high-contrast scenes that might have come from a Murnau silent, to scenes of decadence reminiscent of those in a Stroheim silent, to sequences inspired by Mack Sennett and by British New Wave films like Richard Lester's A Hard Day's Night and Tony Richardson's Tom Jones. The choice of music is sometimes serious, sometimes jokey—everything from Satie, Prokofiev, and Beethoven to John Philip Sousa, "Bury Me Not on the Lone Prairie," and "Bye Bye, Blackbird." Serious subjects like death, suicide, drug and alcohol abuse sit side by side with hysterically funny passages that will have you laughing out loud.

For all the gravity of its subject and the quirkiness of Russell's treatment of it, this is one seriously entertaining movie. It's an incredibly dense movie too, covering in one hour more than most films could manage in twice that time. Yet in the end, Russell's synthesis of opposing styles is not merely self-indulgent cleverness, but rather an intentional choice used to make some very important points. Of all the films in the set I've written about so far, Isadora has the most vivid and clearly defined main character. And for all Russell's stylistic shenanigans, this is also the film that makes the strongest statement so far on the nature of art and artists. If anything lingers after watching Isadora, it's the paradox of just how close individualism is to narcissism, genius to foolishness, and a life's tragedy to farce.
Labels: British Cinema, Ken Russell