If you didn't know you were watching the beginning of Ken Russell's 1967 biography of the English Pre-Raphaelite poet and painter Dante Gabriel Rosetti (1828-1882), you might think you were watching a black-and-white Hammer horror film from the 1960s. The film opens in sensational Hammer fashion, with the nighttime exhumation of a grave. While eerie, melodramatic music on the soundtrack builds in intensity, torches wave over a coffin being raised from an open grave, the scene shot from overhead. The lid slides away from the coffin and we see an arm sweep away cobwebs from the shriveled remains of a woman in a burial shroud. The arm reaches into the coffin and lifts out a small moldy book, the camera moves in for a closer shot of the face, its skin sunken and stretched tight over the skull, and suddenly the title of the film appears: Dante's Inferno. 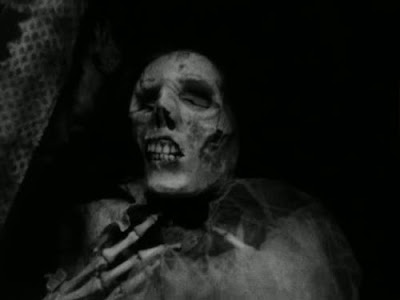 Immediately the scene cuts to a shot of Oliver Reed, who plays Rosetti, leaping directly at the camera over a bonfire around which a group of people are cavorting as they toss in paintings in the style of Thomas Gainsborough and Joshua Reynolds and chant slogans like "Away with the wishy-washies!" A narrator explains in voice-over: "Arson, rapine, riot, civil insurrection is terrifying Europe. This is 1848. . . . In England rebels conspire to overthrow the Royal Academy of Art." Thus the film begins in Ken Russell's typically flamboyant style, with the juxtaposition of horror, social rebellion, and high jinks.

For the next hour and a half Russell gives us a crash course in the Pre-Raphaelite movement and the Pre-Raphaelite Brotherhood, with its fascination with knights and damsels and all things medieval. The cast of characters surrounding Rosetti sounds like a who's who of the movement: his sister the poet Christina Rosetti, the painters Millais, Holman Hunt, and Burne-Jones, the decorative artist and founder of the English Arts and Crafts Movement William Morris, the poet Algernon Swinburne, the critic John Ruskin. But always at the film's center are Dante Gabriel Rosetti and his lovers: his model Elizabeth Siddal, Jane Burden, another model who later married William Morris before beginning an affair with Rosetti, and Fanny Cornforth, yet another model with whom Rosetti lived off and on for several years at the end of his life. The film concentrates especially on Rosetti's relationship with Elizabeth Siddal (Judith Paris), a milliner's assistant who became his model, his muse, his mistress, and eventually his wife. Siddal posed for many of the best-known paintings of the Pre-Raphaelites, including Millais's iconic Ophelia. Their relationship was a stormy one, complicated by her mysterious chronic illness, her addiction to laudanum, and her adoption as a protégée by the domineering John Ruskin. 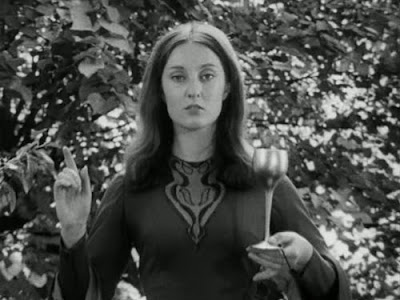 The tone of the film—at least for the first hour—is the mixture of satire and seriousness of Russell's earlier films on Henri Rousseau and Isadora Duncan. The PRB might be preaching a revolutionary message, but unlike their champion the priggish John Ruskin (when offered snuff, he declines, saying condescendingly, "Art is my stimulant"), they aim to have a good time doing it. When early in the film Russell accompanies their prankish behavior with Irving Berlin's "There's No Business Like Show Business" playing on a carnival organ on the soundtrack, we know that these are young men living their lives as theater. Later when Rosetti, Morris, Burne-Jones, and Swinburne spend the summer in Oxford painting murals of the Arthurian legends on the walls of the Oxford Union debating hall, they frolic like buffoons, becoming Russell's Pre-Raphaelite version of the Marx Brothers. Yet when they go out punting on the Isis with Jane Burden, who is posing for the murals as Guinevere, the visuals become almost idyllically beautiful. 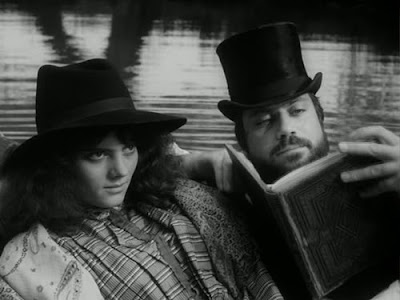 After Siddal's death in 1862 from an overdose of laudanum, the tone of the film takes a sharp turn, becoming serious, hallucinatory, and morbid, and stays there for its last half hour. Siddal's death is portrayed in the film as suicide after she learned of Rosetti's affair with Jane Morris. (The coroner's verdict was accidental death.) It is Elizabeth Siddal's grave which is opened at the beginning of the film, and the book inside her coffin is a journal of Rosetti's containing the only copy of his early poems. Persuaded by an unscrupulous art dealer to exhume Elizabeth Siddal to retrieve those early poems so they could be published, Rosetti chose to place commerce over art, and he never really got over what he came to view as a betrayal of the idealistic principles of his youth. Already in a fragile mental state, his health ruined by alcohol and dependence on the drug chloral hydrate, Rosetti was haunted by what he had done. "He accuses and condemns himself . . . endlessly," his sister Christina says of his despair over the exhumation. Russell has said it was specifically that incident and its effect on Rosetti which inspired him to make Dante's Inferno and guided his approach to portraying Rosetti's life.

The film continues the style Russell developed in the earlier semi-documentary biographies in this box set, but with all the elements of that style more elaborate than ever. Voice-over narration, fully dramatized scenes, and a copious number of passages from Rosetti's poetry recited by Reed accompany stunningly staged, photographed, and edited images filled with detailed period decor, costumes, and Pre-Raphaelite art. Especially memorable are images of the Lake District, where Rosetti and Siddal pursue their romance, and a waterfall used as a recurring location at key points in the film. It appears to be the same waterfall where Millais posed John Ruskin for his portrait of Ruskin, an amazingly realistic, almost photographic work that illustrates the Pre-Raphaelite creed of "truth to nature." (The waterfall's exact location wasn't discovered until 2010, so the one used in the film must be a similar one, though it appears virtually identical.)

Early in the film Rosetti paints Siddal posed there. Later, after the exhumation, it appears in a hallucinatory dream/nightmare sequence while Rosetti is stoned on chloral. Still later it appears again in another hallucinatory sequence during his attempt to commit suicide with laudanum, with Siddal reaching out for Rosetti from her open coffin, which is resting on a boulder in the stream, and Rosetti plunging headlong off the boulder and into the stream at the end of the sequence. At the very end of the film, he returns to the Lake District setting of the early days of his romance with Siddal and yet again to that waterfall, which has become an image of the untamed drama of Rosetti's life. 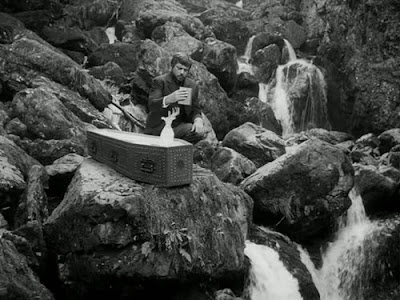 Dante's Inferno is a wonderfully apposite follow-up to Russell's film on Isadora Duncan. Like Isadora, Dante Gabriel Rosetti was a great artist, but also a self-centered showoff who lived life on the grand emotional scale. His contradictory personality was, like Isadora's, composed of traits that were frequently at odds with one another, his serious creative urges shot through with pretension and a degree of dilettantism, his troubled personal and professional lives dominated almost as much by a showbiz mentality as by the artistic impulse. Both were youthful innovators who later ran out of new ideas, who grew stale and saw their creativity fossilize, and whose response to this and to their personal troubles was behavior that became increasingly self-destructive. Theirs was the tragedy of those artists who blaze bright in their youth and burn out in middle age.
Labels: British Cinema, Ken Russell