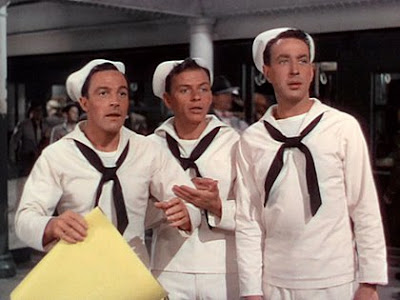 "What could happen to you in one day?" asks a longshoreman of three high-spirited sailors setting off on twenty-four hours' shore leave in New York City at the beginning of On the Town. The answer: a lot more than anyone might reasonably expect. In one day and one night, the three sailors—Gabey (Gene Kelly), Chip (Frank Sinatra), and Ozzie (Jules Munshin)—see more sights, meet more people, and get into more mischief than they could ever have imagined. And along the way they find romance in the form of three lovely residents of the city who accompany them as they visit tourist sights from the Statue of Liberty to the Empire State Building, romp from Manhattan to Brooklyn to Coney Island, and sing and dance their way all around the town. 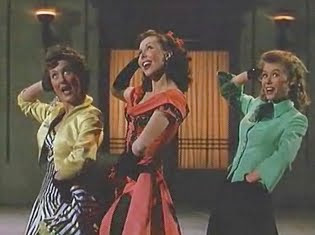 The sailors are all small-town boys awed by the prospect of spending a day in what in their minds is the most glamorous and bustling city in America. The bashful Chip is an inveterate sightseer determined to visit as many of the city's landmarks as possible in twenty-four hours. The girl he hooks up with, a romantically aggressive taxi driver named Hildy (Betty Garrett), falls for him as soon as the boys hail her cab and immediately becomes their self-appointed tour guide. Gabey, a starry-eyed romantic from Indiana, falls in love at first sight with a girl whose picture he sees on a poster in the subway. She's Ivy Smith (Vera-Ellen), and she has just been chosen by the Transit Authority as Miss Turnstile, the subway poster girl of the month.

When Gabey sees her for real in a subway station but can't reach her before she leaves on the next train, he and his buddies, chauffeured by Hildy, set off after her. One of their first stops is the Natural History Museum, where a student of anthropology, Claire (Ann Miller), takes an immediate shine to the goofy Ozzie because of his resemblance to the statue of a caveman on display there. Soon she, Hildy, and the sailors are all involved in the pursuit of Gabey's elusive dream girl, an odyssey that takes them from one end of the city to the other.

The musicals made at MGM by On the Town's producer, Arthur Freed, in the 1940s and 1950s are legendary. Originally a pianist, vaudeville performer, and songwriter, Freed produced his first film (uncredited) in 1939. It was for MGM and the film was The Wizard of Oz. The same year MGM gave him his own musical film production unit, and for the next twenty years Freed and his unit were responsible for some of the greatest musicals ever made. Over the years Freed brought together a group of people—writers, musicians, choreographers, dancers, actors, directors—whose talent and ability to work together were unequaled in the film industry. In his foreword to Clive Hirschhorn's The American Musical, Gene Kelly, who worked on twelve films with Freed, described working with the Freed unit at MGM:

The members of the group who worked at MGM during my tenure there were very serious about musicals. That is not to say that we didn't make them to entertain and uplift the spirit, but we thought that to do this effectively they had to superbly crafted; and that meant the closest kind of collaboration. . . . There were probably more assembled talents in this field at Metro than anywhere else at any other time. 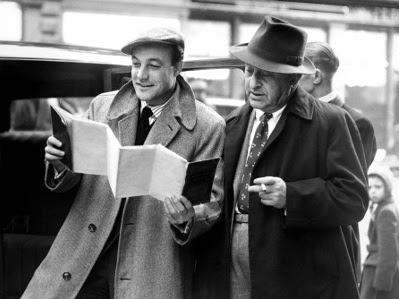 Gene Kelly and Arthur Freed
Freed's greatest musical film achievement is universally acknowledged to be Singin' in the Rain (1952), and I certainly wouldn't quarrel with that assessment. After that sublime film, any of a number of other musicals produced by the Arthur Freed unit could reasonably be designated for the number two position in the Freed canon. Meet Me in St. Louis, Easter Parade, An American in Paris, The Band Wagon, Gigi are all strong contenders. But my own favorite Freed-produced musical after Singin' in the Rain would be On the Town. It's a big, rollicking, unflaggingly kinetic movie that combines jazzy, assertive music, flippant dialogue and song lyrics, slapstick physical comedy—including a rousing car chase through Brooklyn, the three sailors in drag at Coney Island, and a collapsing dinosaur skeleton borrowed from Bringing Up Baby—and dance styles from tap to ballet to acrobatic in a package wrapped in nonstop creativity and inspiration.

Even so, the film's originality is less the product of pure innovation than of innovative synthesis. From the earliest days of the movies sailors had been used as fodder for comedy by people like Harold Lloyd, Laurel and Hardy, and Abbott and Costello. Sailors had also been the subject of musicals like the Eleanor Powell film Born to Dance (1936), the Astaire-Rogers film Follow the Fleet (1936), even Gene Kelly and Frank Sinatra's previous picture together, Anchors Aweigh (1945). Its antecedents in film comedies and musicals aside, On the Town was the result of its own evolutionary synthesis, from ballet to stage musical to musical film. It began in 1944 as a ballet called Fancy Free, with choreography by Jerome Robbins and music by Leonard Bernstein. Robbins and Bernstein invited Betty Comden and Adolph Green to provide book and lyrics, and the ballet was developed into a Broadway musical financed in part by the sale of the film rights to MGM. Finally, after much tinkering and modification, its book rewritten and most of the original songs replaced, it became the movie we know today.

A good example of an existing idea that the film adapted and advanced can be found in the "A Day in New York" number. Toward the end of the film Gabey, walking through the streets alone, comes upon a poster for a show called "A Day in New York" and slips into a reverie in which he imagines the show as a condensed version of the experiences of the three sailors' own day in the city, a dream ballet featuring Kelly, with the five other principals replaced by ballet dancers (one of them recognizably Carol Haney). Perhaps a holdover from the original concept of Fancy Free, the number is clearly inspired by both the dream ballet in the 1943 Broadway musical Oklahoma! as well as the Red Shoes ballet in Powell and Pressburger's The Red Shoes. The "A Day in New York" number in turn led directly to the ballet finale in An American in Paris and the elaborate movie-within-a-movie sequence "Broadway Rhythm Ballet" in Singin' in the Rain. 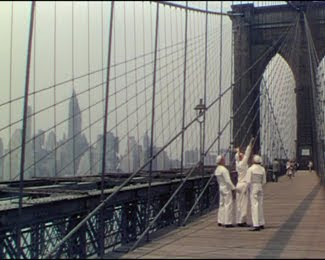 Another example of the adaptation and advancement of an existing film idea in On the Town is the use of real New York locations in the picture. One of the great creative developments of postwar American filmmaking was to get movies out of the studio and on location, the way the postwar Italian neorealists and certain prewar plein-air filmmakers like Jean Renoir had done. Yet for some reason this move away from the Hollywood studio didn't seem to reach the musical until On the Town. Only part of the picture was shot on location, but those parts give it an authenticity and realism that could never have been achieved on a sound stage or studio backlot. The next time you watch the Sharks and the Jets dance down the streets of the West Side, or the Austrian Alps come alive with the sound of the music of Rodgers and Hammerstein, or Barbra Streisand admonish the sky from that tugboat not to rain on her parade, think of On the Town as the musical that started it all.

The other great synthesis in On the Town is the way it unites all of Gene Kelly's prodigious talents and fuses them into one creative whole. Singing, dancing, acting, choreography, film direction—this is the first example of Kelly filling all these roles in a single film. While it's true that directing credit is shared with Stanley Donen, the creative life force of On the Town springs directly from Gene Kelly. Both Kelly and Donen have commented that working together showed them how difficult it is for two people to share directing chores, but that didn't stop the pair from topping themselves just three years later with Singin' in the Rain. Ultimately, On the Town might be seen as a warm-up act for that greatest of all musicals, but if so, what a warm-up act it was—a zany, colorful, exuberant movie that jet-propelled the musical film to new heights.

This post is part of the Gene Kelly Centennial Blogathon sponsored by the Classic Movie Blog Association. For more information on the blogathon, click here. On the Town plays on Turner Classic Movies on Thursday, August 23, the 100th anniversary of Gene Kelly's birth, as part of TCM's Summer Under the Stars. Check local listings for times. Also check out the 2012 TCM Summer Under the Stars Blogathon for more on Gene Kelly and all the stars featured on TCM this month.
Labels: Gene Kelly, Musicals, Stanley Donen