I just finished reading the 2011 biography of Pauline Kael, Pauline Kael: A Life in the Dark, by Brian Kellow. Kael was one of the first critics I read regularly when I first started getting interested in films and film criticism, and I can still recall which films she liked and which she didn't, and remember many pungent turns of phrase from her reviews and capsule reviews in The New Yorker. I found the book an easy read. It's thoroughly researched, reads like a narrative, and focuses especially on her opinions and reviews from the 1960s through the early 1980s, when her influence and the power of her writing were at their height.

One of the most interesting things about the book was how much Kael's writing seemed to reflect her personality. She wasn't a terrible person, but she couldn't exactly be described as nice either. Her self-centeredness, her highly opinionated nature, her lack of consideration of the feelings of others when expressing her opinions, and her tendency to overstate her opinions (if she didn't like a thing, she loathed it; there seemed little room in her nature for ambivalence or a moderate opinion) were all reflected in her writing. But even if her opinions of individual films eventually became quirky and lost much of their power to influence critics and audiences, she forever changed the way people write about movies.

It's hard to believe that she constantly had to fight New Yorker editor Wallace Shawn to be allowed to write her reviews the way she wanted to. The things she fought Shawn about—things like injecting herself into the review rather than purporting to have some kind of objectivity, using colloquial and even scatological language, writing until she had had her say rather than writing to a set word count—are today found in just about every full-length film review published in the magazine. Kael made the centerpiece of her style of criticism not some form of detached aesthetic judgment, but her own examined reaction to a film.

She was fiercely anti-dogmatic and anti-academic in all aspects of her life, and this part of her temperament is one of the reasons she rejected auteurism or any other comprehensive philosophy of cinema. Even if she carried her dislike of formal film theory to extremes, often rejecting the good ideas along with the half-baked, I think she had the right idea. I've always been suspicious of dogma myself, looking upon it as a strait-jacket to independent thinking. At some point it seems to become a crutch, a convenient template to try to squeeze everything into, and if it can't be made to fit reject it. And don't get me started on the formal, theoretical, academic approach to writing about film or anything else. Yuck!

Still, Kael had many shortcomings as a person, and these are covered in the book. There's no question that she was self-centered, alternately generous and narrowly judgmental, and often insensitive of others, even her own daughter, with whom she created a strangely co-dependent relationship (strange given her absolute independence in all areas of thought). As Owen Gleiberman (film reviewer at Entertainment Weekly), a one-time protégé who later broke with her, says  "She was a great, fascinating woman who had her dark side." Although she was at times rather tactless in her relations with others,  I saw nothing to indicate that she was ever intentionally mean to anyone, either in life or in print.

Read practically anyone writing about film today—in newspapers, magazines, on the internet—and you will at some point see her influence. I've also been reading Andrew Sarris's "You Ain't Heard Nothin' Yet" recently, and although I don't agree with either of them 100% of the time, I can say without hesitation who in my judgment was the better writer and who I would rather read for the sheer, contagious enthusiasm of the writing: Kael.

Most interesting bit of trivia in the book: One of the jobs of the highly respected fact-checking department at The New Yorker was to go to movies and take notes on them to check factual details in the film reviews published at the magazine. Since Kael claimed that she never watched a movie more than once (some dispute the accuracy of this), and because she tended to take copious notes while watching (not only on the film but also on the response of the audience), she must have kept the fact checkers busy. Thank God that today we have IMDb! 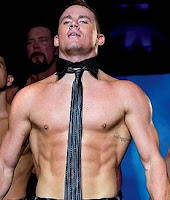 Because I've read some good things about Magic Mike and because it was directed by Steven Soderbergh, I grabbed it off the DVD carousel at the library last week. It had just arrived that day. After watching it, I felt as if I'd watched a slick two-hour long commercial for a fantasy lifestyle. The words "shallow" and "superficial" don't even begin to describe the film's lack of substance. There is nothing in the movie that I found real, and even taken as a puerile male fantasy, the film is unconvincing.

Soderbergh's attempts to inflate the importance of the story by painting Matthew McConaughey's character as an entrepreneurial visionary and Channing Tatum's as an uninhibited lost soul never ring true. (This is seriously hampered by Tatum's limited acting range and inability to suggest there's anything much going on in his character's mind or emotions.) The onstage gyrations of the strippers are about as unerotic as you can imagine. And Tatum, People magazine's current Sexiest Man Alive (McConaughey got this title a few years ago), looks decidedly unappealing in many shots. With his bland facial features, bull neck, and gym-created designer torso, he's an action-figure caricature of masculinity. Between his night job stripping, his day job as a construction worker, and regular partying, it's not clear how or when he manages to keep in this kind of shape, just one of many practical details the film ignores.

I once considered Soderbergh a great director. He created the indie film with Sex, Lies, and Videotape then went on to show that he was equally adept at multi-layered drama (Traffic), straightforward narrative (Erin Brokovich), and wild experimentalism (Schizopolis). My favorite film of his is The Limey, in which he seemed to fuse all these approaches. All I can say is that beginning with all those Ocean's movies, he began squandering his talent. As an example of the lamentable decline of a once promising film personality of the 1990s, he's matched only by Johnny Depp.

The Year at The Movie Projector 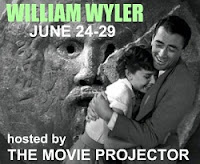 This was the year of the blogathon at The Movie Projector. During 2012 I participated in eleven blogathons, beginning on New Year's Day with the Month of VERTIGO at The Lady Eve's Reel Life. I also participated in two mammoth countdowns at Wonders in the Dark, one on musicals and the other, just finished, on the greatest comedies of all time. In all, six of my posts were published at WitD for the two countdowns. For some of the blogathons I chose obscure films that I thought others wouldn't be writing about. For others I ended up doing the kind of well-known and frequently reviewed film that ordinarily I try to avoid.

My biggest problem at The Movie Projector these days has been finding suitable films to write on—ones that I feel enough enthusiasm for to inspire me but that haven't been extensively covered elsewhere. That's one of the reasons my posts have become a bit less frequent this year.  Looking back, though, I appreciate the opportunity some of the blogathons gave me to revisit and write on well-known films that normally I would have hesitated to write about. The posts I wrote on those movies are some of the ones I ended up being most pleased with. My biggest disappointment this year continues to be that the posts I write on foreign language films consistently tend to generate less interest in terms of pageviews and comments than the English language films I write on. Come on, people—let's get hip to the classics of foreign film. These ruled the 1950s and 1960s.

The biggest news in the blogathon department was, of course, the William Wyler Blogathon, the first blogathon ever hosted by The Movie Projector, which ran June 24-29. Twenty-five bloggers wrote on all the major films of Wyler, from Hell's Heroes (1930) to Funny Girl (1968). The enthusiasm of the writers and the quality of the writing was stupendous. And to top it all off, right after the blogathon ended I received an e-mail from the Wyler family saying how much they had liked and appreciated the blogathon.

Film Watching in 2012
I wouldn't say that 2012 was marked by the discovery of a startling number of good new films, but I did see for the first time a number that left a good impression on me.
What Next?
In July 2013 The Movie Projector will observe its fifth birthday. Another blogathon is in the works, possibly for mid-March or early April 2013. Check back after the new year for more information.

Final Words
My sincerest thanks to everyone who took the time to leave a comment this year at The Movie Projector. Happy holidays to everyone, and best wishes for a prosperous and happy New Year 2013.