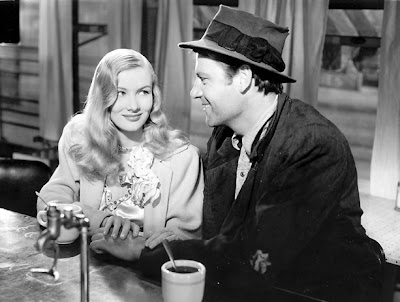 When making out my ballot for the Comedy Countdown at Wonders in the Dark, the biggest dilemma I faced was deciding just what was a comedy and what wasn't. As I worked on the list, several films whose overall tone I was uncertain of fell off the list. A few of these eventually found their way back on. One of the films I went back and forth on was Sullivan's Travels, which I eventually placed at #5, right after my two favorite silent comedies—one by Chaplin and one by Keaton—and my two favorite screwball comedies. The dilemma I faced in classifying Sullivan's Travels is that it doesn't fit comfortably into either the "comedy/ha-ha" or the "comedy/not tragedy" modes of humor. Tonally, the film is a real paradox, a movie where gravity and humor exist side-by-side, a tragicomic picture whose subject is comedy and whose premise is a serious one—that a movie which aims to do no more than make people laugh is as important as one that makes them think.

Joel McCrea plays film director John L. Sullivan, Hollywood's Caliph of Comedy, who decides that he's tired of making frivolous movies, no matter how popular they are, and wants to direct a film that makes a serious statement about contemporary socioeconomic conditions. Because Sullivan has no first-hand experience of the grinding poverty he wants to depict onscreen, he decides to research the subject by disguising himself as a tramp and going out on the road. No matter where he heads, though, circumstances invariably take him right back to Hollywood. During one of these false starts he acquires a traveling companion, an aspiring actress who has given up on Hollywood and is on her way back to Kansas when she meets Sullivan at a diner. (Called simply The Girl, she is played by Veronica Lake in her first starring role. She was never again this natural or this good.) It's fully two-thirds of the way through the film before the pair finally manage to get on the road and gather the knowledge Sullivan needs to give his new picture authenticity. When he decides to go back on the road one last time alone, the film's comic tone, already sobered by what he and The Girl have experienced of life on the skids, turns tragic.
Preston Sturges's film career was one of the most curious of all the major American directors of the studio era. A slow decade-long rise during the 1930s as a sceenwriter led to overnight success and a screenwriting Oscar in 1940 for his first film as director, the political satire The Great McGinty. (Could that be Sturges's own Oscar for McGinty in one of the montage scenes near the end of Sullivan's Travels?) Several years at Paramount as one of the most highly regarded directors in Hollywood followed, then a sudden and precipitous decline in the mid-1940s and years of obscurity before being rediscovered by auteurist critics like Andrew Sarris, who called him "the complete writer-director . . . the brightest comedy director of the forties."

Sullivan's Travels is Preston Sturges's masterpiece, yet in many ways it is his least typical film (if you discount The Great Moment, his one failure during his heyday, a film he disowned after Paramount re-edited it). Sturges abhorred homiletic message-mongering and pomposity of any kind, skewering them in his films as often and as acerbically as possible. The French critic André Bazin went so far as to call him "the anti-Capra" for his penchant for turning humor into irony, yet Sullivan's Travels is the closest he ever came to a Capraesque irony-free message movie. In seeking to answer the question What is the true value of comedy in film? Sturges cannily devises a plot in which he can have his cake and eat it too, in which he can present the message that in movies, messages are less important than humor—an anti-message-movie message movie.

To counterbalance the seriousness of the film, Sturges includes a fair amount of the broad physical comedy he delighted in—a fast-motion car chase, a sequence shot like a silent comedy of Sullivan escaping from a predatory farm widow by climbing out of his second-floor bedroom window, another speeded-up scene with The Girl racing across the studio lot in period costume bumping into everyone in sight, and even Sturges's beloved pratfalls with McCrea and Lake falling into Sullivan's swimming pool not once but twice in less than five minutes. "Like most effective comedy directors, he depended more on the pacing of action and dialogue than on visual texture and composition," Andrew Sarris writes of Sturges, and it's true that Sullivan's Travels is filled with the long takes Sturges favored so as not to distract from his brilliantly crafted dialogue. There's no camera or editing virtuosity here. As usual, Sturges prefers to plant his camera in front of the actors or have it follow them as they walk, and simply observe as that witty, articulate dialogue pours forth.

Still, as amusing and seductively clever as these comic sections are, it's the quietly haunting serious passages in the last half hour of Sullivan's Travels—scenes that for once do rely on visual texture and composition, on artful camerawork and editing—that are more likely to stay with you. After Sullivan and The Girl finally manage to escape Hollywood on a freight train, their experience living homeless and penniless is shown in a tour de force nine-minute long wordless "Poverty Montage" that is remarkable for both its grimness and its visual fluidity. Here Sturges goes beyond anything in a Capra movie, taking us along with Sullivan and The Girl as they immerse themselves in the bleak existence of the dysfunctional and dispossessed. Sullivan's last road trip contains another bravura wordless sequence, a nocturnal montage that concludes in a deserted rail yard, a sequence that wouldn't look out of place in a film noir from later in the decade. (The cinematographer is the great John F. Seitz, who shot several of Billy Wilder's most noirish films including Double Indemnity and Sunset Blvd.) And the entire last section of the film, when the amnesiac Sullivan is jailed in a Southern chain-gang camp that might have served as a model for the one in Cool Hand Luke, is steeped in a visual atmosphere of swamp water, Spanish moss, degrading physical brutality, and almost nightmarish disconnection from the rest of the world. Nothing like these passages is found anywhere else in the films of Sturges.

In John L. Sullivan, Sturges hands Joel McCrea the role of his career. A naturalistic actor in the vein of James Stewart and Henry Fonda, McCrea is today probably best remembered for the many Westerns he made. His stoic, humorless, at times even priggish screen persona made him a natural for Westerns, but he seldom appeared in comedy films. Sturges, however, saw that in the right context McCrea's humorlessness was its own kind of funny and was able to tap into McCrea's deadpan style in the two comedies they made together (the other is The Palm Beach Story, which I wrote on a few months ago) to bring the film back down to Earth when the outlandish situations Sturges concocted and the surrounding gallery of oddball characters threatened to unmoor it. McCrea's seriousness might make him seem a quirky choice to play a successful director of comedy films. But this is a deliberate and brilliant piece of casting, and McCrea is utterly believable as the frustrated, serious-minded director of assembly-line studio movies who chafes at giving the public what they want rather than what is good for them, and longs to direct something of greater importance than the fluff that has made him rich and famous.

The catch in Sullivan's "deep dish" aspirations is that, insulated from the real world by his wealth and his job in a movie fantasy factory, he has little grasp of the lives or problems of ordinary people. When he attends a movie with that sexually aggressive farm widow, he seems bewildered, as if he has never before seen a movie in a real theater with a real audience and has no idea what these people hope to gain from the experience. This is repeated later in the film when Sullivan, now an amnesiac inmate, attends a movie with his fellow prisoners in a black church. The movie is the Disney cartoon "Playful Pluto" (the one where flypaper gets stuck on Pluto and he can't get it off), and the reaction of the prisoners and the impoverished black congregation to the humor in the cartoon transforms Sullivan. When he finds himself responding to Pluto's antics with laughter, he's caught off-guard. His face suddenly freezes in disbelief, he looks around him at all the other people laughing uproariously, then turns to the convict next to him and asks, "Hey. Am I laughing?"
This is the key scene in the picture, the one and only time in the film we see Sullivan laugh. It's an epiphanic moment that, when he is finally restored to his rightful place in Hollywood, causes him to abandon plans for a serious motion picture and make the film's famous declaration of principles in favor of comedy: "There's a lot to be said for making people laugh. Did you know that's all some people have? It isn't much, but it's better than nothing."

This post was written as part of the ongoing Comedy Countdown at Wonders in the Dark, where Sullivan's Travels came in at #10. Be sure to check out all the great films being covered in the countdown, which runs through late December 2012.
Labels: Joel McCrea, Preston Sturges